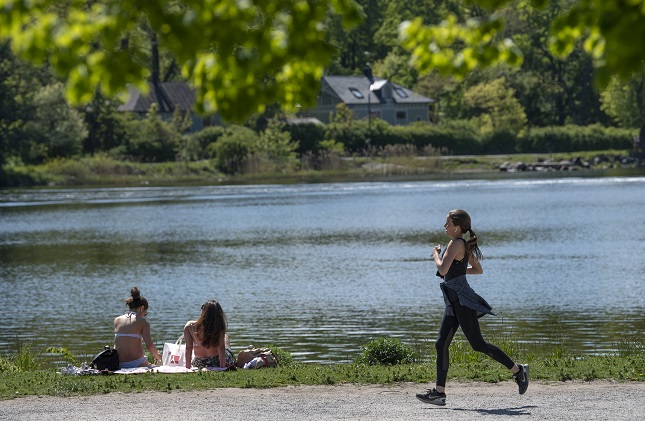 The spread of infection is now stable, city councillors noted when speaking to media on Tuesday morning, and a number of measures have been taken to ensure that the situation remains under control during the summer.

That means extra police and security officers, and extra staff and materials to the healthcare sector while ensuring that medical and elderly care workers are able to take a holiday.

But the main message of the morning was that Stockholm is open this summer. With more locals likely to remain at home, and fewer tourists visiting, the warmer months will nevertheless need to look very different, so here's what to expect.

The council announced the launch of a new website, sommar2020stockholm.se, with tips on activities and events around the region in summer, as well as a chatbot and map to help with summer planning.

Part of the idea behind this is to encourage city dwellers to explore lesser visited parts of the city, and avoid crowding in the most popular areas.

“Spread out properly. Take the chance to explore places you haven't been to before, instead of what we're seeing now with lots of people going to Rålambshovsparken for example and crowding there; we don't want that,” said Daniel Helldén, referring to a popular park on the central Kungsholmen island.

“We have just in the city centre 28 parks, 32 pools and nine outdoor pools, nine fantastic nature reserves. Use these. We need to make sure it doesn't get too crowded.”

People were also reminded that facilities, activities, and even certain green spaces might get crowded, so it's crucial to have a plan B in case you need to go somewhere else to make sure you don't contribute to the increased spread of infection.

“I think we've all seen that there has been too much crowding, including on public transport. Social distancing is still important,” said councillor Jan Jönsson. “We understand that patience is strained but we have to make the effort, especially for those in risk groups.”

The summer activity website also advises Stockholmers to cycle or walk rather than taking public transport if possible. Current advice from the Public Health Agency remains to avoid public transport when you can, and if you do need to use it, to try to avoid busy times such as rush hour. A billboard in Stockholm urges everyone to remember to stay at home if they feel at all unwell. Photo: Henrik Montgomery / TT

Stepped-up checks of pubs and restaurants

From July 1st, regions will also take over responsibility for inspections of over-crowded restaurants and pubs. Currently it is up to the Environmental Department to carry out checks and for infectious disease doctors to take the decision to close venues if necessary.

The change should make it quicker and more efficient to take any necessary measures if venues are violating the rules around social distancing, the council said.

Visit the elderly — but outdoors

“We can't let a whole summer go by without our elderly being able to visit close relatives,” said councillor Erik Slottner who is an commissioner for the elderly.

For nearly three months, there has been a nationwide ban on visits to elderly care homes, which Slottner said was likely to be extended until at least September. At the same time, anyone aged over 70 has been urged to avoid all non-essential contacts including visits to grandchildren or even to the supermarket or pharmacy.

Sweden recently mulled changing the rules for otherwise healthy people in their 70s, but decided to keep the guidelines for now. However, people who live at home and are over 70 are encouraged to go outdoors for exercise as long as they avoid close contact (closer than two metres) to other people. This can even include socialising with others at a distance, for example playing croquet or boules, the Public Health Agency has said.

And at Stockholm's care homes, new guidelines are being introduced to allow visits in a safe way, including outdoors and using measures such as plexiglass screens, the council said. This is to mitigate the risks to physical and mental health from long-term isolation.

Once again, the councillors reminded Stockholmers to continue following the recommendations in place from the Public Health Agency.

That includes maintaining good hygiene, keeping distance from others in public places, avoiding using public transport unless necessary, and staying at home if you experience any cold- or flu-like symptoms.