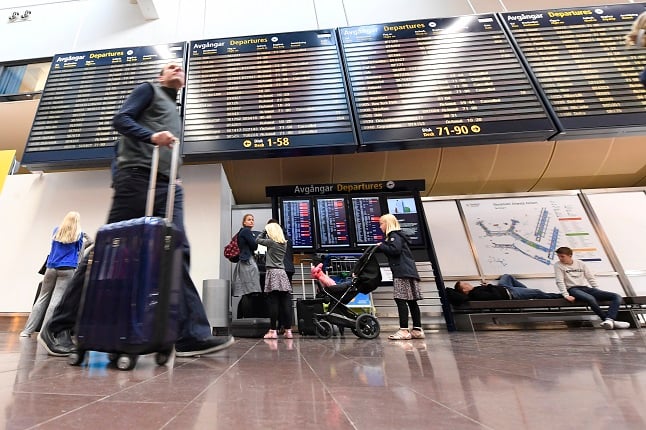 Hundreds of travellers returning to Sweden during the end of February may have brought the coronavirus with them. Photo: Mikael Fritzon / TT

From late February, people in Sweden who experienced cold- or flu-like symptoms after returning from northern Italy were tested for the virus, and by March 9th this was extended to Austria's Tyrol region.

But the agency now knows that the virus came to Sweden from many other areas, with a report to be published later on Thursday.

Speaking to Dagens Nyheter, Public Health Agency General Director Johan Carlson admitted: “Our focus was on travellers to Italy, but today we know that the infection came from a range of other countries that went under our radar.”

“Well-established people from the Stockholm region who went to Italy on the winter sports break and read and listened to the news, they were easy to contact,” said Carlson, who praised Stockholm's Disease Control unit for work on testing and contact-tracing travellers returning from Italy.

But by this point, it's now understood that the outbreak had already spread in several other countries.

Studies of the virus show that it likely came to Sweden from a number of different countries before spreading from person to person here. In the first weeks of the outbreak, most variants of the coronavirus present in Sweden were the same as those in Italy, according to Carlson, who says this is logical since it was travellers from Italy and their contacts who were tested in the early stages.

“When we study the variants that were in society a month later, the pattern is different. Variants which don't have their origin in Italy dominate, which probably came from other places in Europe and the world,” he said.

“The conclusion we come to is that disease control through isolation and contact tracing to a large extent succeeded in preventing the infection from Italy getting a foothold. Instead the infection came in to Sweden from a range of places in the world since the pandemic was already established,” he explained. Johan Carlson is the head of the Public Health Agency which advises the government on matters related to public health. Photo: Claudio Bresciani / TT

Swedish state epidemiologist Anders Tegnell has previously said that Italy was not the “major motor” behind the spread of the virus in Sweden, although travel during the winter sports break was the main way the coronavirus came to Sweden.

Some of the countries where the infection came from include the UK, France, the Netherlands and the USA. According to Carlson, it would have been impossible to test all returning travellers with symptoms, especially during February which is the typical cold and flu season, and he also told Dagens Nyheter he was sceptical that a wide-ranging quarantine or request for returning travellers to self-isolate would have been effective.

No advice to self-isolate after returning from abroad was ever introduced in Sweden, though by March 15th the country advised against all non-essential overseas travel. General recommendations to keep distance from others in public only came in on April 1st, following earlier recommendations to work from home and avoid public transport if possible, maintain good hand hygiene and limit social contacts.

Carlson's comments come as a major British study shows that the virus came to the UK on over 1,000 separate occasions. At least 1,300 people brought the virus to the island from overseas, and it then began to spread, with Spain, France, Italy, Belgium and the Netherlands the most common countries of infection.

The dates of the winter sports holiday in Sweden vary from region to region. When Stockholmers returned to school on March 2nd, Sweden's advice was that anyone who developed symptoms after returning from travel in China, South Korea, Iran or northern Italy should isolate and contact healthcare services. This was not binding and did not apply to symptom-free people returning from travel, nor did it apply to travellers returning from other locations which we now know already had a large spread of the virus by that time.

The fact that Sweden's other most densely populated regions, Skåne and Västra Götaland, had their holidays one and two weeks before Stockholm is one possible reason they have so far seen a much lesser spread of the virus. The country has seen almost 5,000 deaths with the coronavirus, more than 2,000 of those in the Stockholm area. This is significantly higher than in neighbouring Nordic countries Denmark and Norway.

Carlson said this is not necessarily a reflection of the impact of measures in different areas, using the example of Swedish Skåne's low rate of infection compared to the neighbouring Danish region Zealand, which has been worse hit by comparison.

“It is a very random distribution, with super-spreading that hits certain areas, not like influenza that goes like a flood across the continent. Our hypothesis is that Sweden received much more infection from travelers than the other Nordic countries. We have more travellers and also a different travel pattern. And when the virus enters a country, it hits unevenly. In fact, only Stockholm, Södermanland and to some extent Östergötland have had a real attack in Sweden. We can see the same thing in Germany where it is mainly the Ruhr area that has been affected, in Berlin there is almost nothing,” he noted.