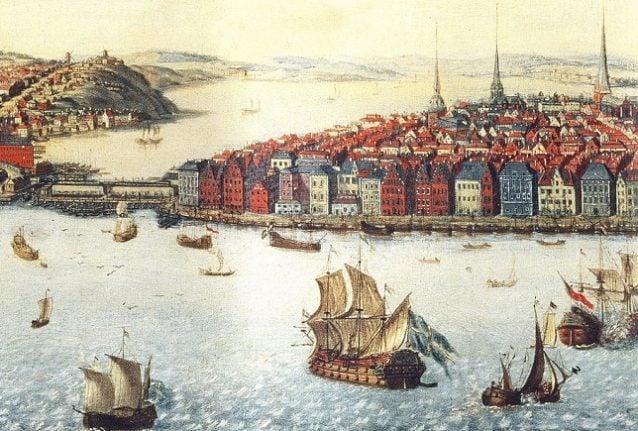 Ships at the Skeppsbron area of Stockholm, one of the stops on a walking tour based around Sweden's role in the transatlantic slave trade. Image: Stockholms stadsmuseum, Public Domain

Faaid Ali-Nuur works at adult education association ABF as a national coordinator and previously helped to set up a Stockholm walking tour with the National Afro-Swedish Association, based around Sweden's role in the transatlantic slave trade.

The idea was to better educate Swedes on a grim chapter in their country's history by showing them the places and objects linked to the slave trade, as part of a wider project called Afrophobia then and now.

Skeppsbrokajen, a quay in Gamla Stan, is where Sweden's first slave trade expedition landed on its return from the Caribbean, with four black children onboard who were brought to Sweden and likely ended up as slaves for wealthy Stockholmers. Not far away is the Slussen area, where iron from Swedish mines was sent to slave-trading countries including the UK.

“This was to be used as chains, shackles and many more things during the slave trade. These are central locations and people go past them every day without thinking about the meaning they had for the Swedish economy, and that black people were the victims,” he says. A statue of Gustav III at Skeppsbron. The Swedish king was the largest single shareholder in the Swedish East India Company, hoping to benefit from the slave trade. Photo: Hasse Holmberg/Scanpix/TT

Fredrik Thomasson, a professor at Uppsala University, who has spent the past ten years focusing on research into Sweden's colonial past, says there are several reasons that this period is not better known.

“It's in the history books but is more looked upon as a quaint episode, not really taken seriously – also because it was an economic failure, the colony was a loss-making project,” he notes.

“A good comparison is Denmark which had far more important islands in the Caribbean and in Denmark today there are more memories of Danish colonisation, but that's also because they made more money – when you go to Copenhagen at the port area you see big brick warehouses which were built with money from the slave trade.”

“There are a lot of reasons why, but one is that Sweden doesn't want to remember, it doesn't really fit with the Swedish self-righteous image as a world 'improver'. I don't think there's any conspiracy, but there's been very little research. Over the last 10, 15, or 20 years there has been more interest – I had two PhD candidates in 2016 on the subject but those were still the third and fourth in Swedish history.”

Although Sweden was not a major colonial power and most of its colonies were short-lived, Thomasson says this was not for lack of ambition. Its most significant colony was Saint Barthélemy, which it owned for nearly a century. The island's capital city Gustavia is named after the Swedish king, and in the 18th century was Sweden's fifth largest city.

The lack of research into colonialism in Sweden makes it difficult to quantify the country's involvement, but Thomasson says a recent PhD thesis says there were around 12-13,000 African captives transported on Swedish ships. “It's a minor number compared to the millions when you look at the US and so on, but it indicates Swedish ambitions.”

Although Thomasson doesn't describe himself as an activist historian, he says that more research and academic focus on this part of history is needed. “I think that Sweden needs to recognise its involvement. It's not really for me to judge the importance, but we can't judge the importance if we don't first have the research.” People in Gothenburg take part in a global wave of anti-racism protests which were sparked by the killing of black American George Floyd by police, but have also highlighted structural racism across the globe. Photo: Adam Ihse/TT

Projects like the walking tour can show Swedes how their everyday life has been shaped by this history.

Ali-Nuur says that while he was working on the project, the response was mostly positive, including interest from museums who reviewed their own collections and the way they presented exhibits, but that some were critical and pointed to the fact Sweden was involved to a lesser extent than countries like the USA and UK.

“We didn't make anything up, the stories came from research and facts, and there will be people who reflexively have a problem with us highlighting this part of history but you can't really do anything about that. You can only debate with people who have a rational argument,” he notes.

What's more, the impact on structures in society that disadvantage black people in Sweden today, he says, is “so obvious that it's hard to explain”.

“It's built into all systems in our society. It's not over, we're living with it – not physical chains or owning another people, but we see inequality founded on racism very clearly in the housing market, in the labour market, access to care, everywhere possible. You can't miss it. Some people are defensive because they think they're being accused themselves of being racist. But it's the systems we are critical of,” he says.

This doesn't mean he expects everyone to read up on this part of history to a major extent, but projects like the walking tour, expanding school curriculums, or erecting memorials and adding to museum exhibitions can help ensure it is part of public consciousness.

“I compare it to climate change. There are few of us who are experts on how the changes look, what the effects will be in the long-run and know exactly the science behind it, but most people are aware that it's happening and know they need to change their behaviour,” he says.

“It's the same thing here. Not everyone needs to be an expert on the history of racism and have that deep knowledge, but we all need to be aware that it happened and be aware of the systems today, and decision-makers, state agencies, politicians, anyone with that power needs to have a plan to work actively against racism.”