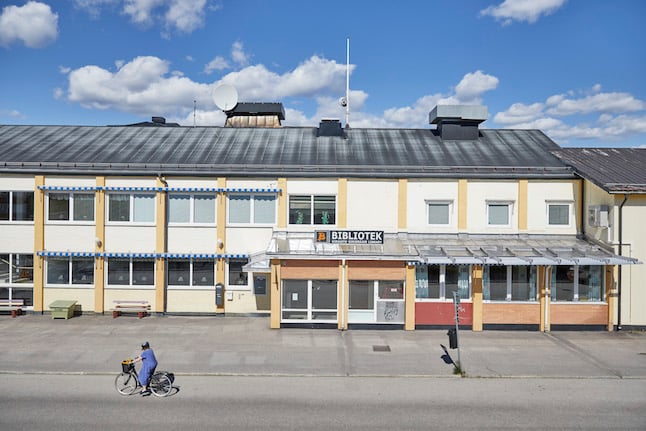 The library, as other public facilities in Gällivare, has been closed for the time being, following a surge in corona cases. Photo: Hans-Olof Utsi/TT.

On Wednesday, the Gällivare municipality in the northern region of Norrbotten, issued a statement warning: “We are now experiencing an uncontrollable spread of Covid-19 in our municipality, that puts the society at risk.”

“The region Norrbotten has noticed a worryingly high number of infections. We ask for great caution. Everyone needs to take responsibility and help contain the spread of infections. We are experiencing an acute situation,” the statement continued.

But the municipal council and infectious disease experts were quick to say that these messages, issued early on Wednesday, were unnecessarily alarmist.

One council member Henrik Ölvebo, from the Green Party, described the virus spread as ‘serious’ — but not ‘uncontrollable’.

“During a crisis, the communication department can move a bit too fast”, he told press agency TT, explaining that this could lead to careless choice of wording. The 'Kulturhus' or culture house in Gällivare had to close its doors, too. Photo: Hans-Olof Utsi/TT.

But the city is clearly taking the situation seriously.

Gällivare proceeded to close all sports and cultural facilities like swimming pools, libraries and museums, until further notice. Several bus routes to the city centre were also halted.

The latest statistics from the Public Health Agency show that Gällivare saw 31 new confirmed infections during the first week of June, or 17 new infections per 10,000 inhabitants.

This number is relatively high; the 14th highest in the country. The number of infections went up from 7 new coronavirus cases in the last week of May and only 1 the week before that.  According to local politician Ölvebo, the total number of infected people in the municipality currently amounts to 123.

Of the people currently ill with the virus, around 7 of them have been admitted to intensive care. The region has no fixed number of intensive care beds, but has announced that they are able to increase their capacity if necessary.

Most of those who’ve fallen ill are centered in the northern parts of the region, especially in Gällivare, Per Berglund, Norrbotten's health chief, told reporters on Thursday morning.

So what's behind the rise? At the press conference on Thursday morning, the regional head of infectious disease Anders Nystedt acknowledged that since the start of June, Norrbotten has witnessed a strong increase in confirmed Covid-19 infections.

Nystedt said that this had both to do with some cases of ‘cluster spreading’ and with a surge in testing.

Last week, 2,400 regional inhabitants had been tested for Covid-19, compared to around 1,200 the week before. With more people tested, more cases will be found, especially since the majority of people who get ill with Covid-19 experience only mild symptoms.

This has also happened on a national level. Sweden was slow to get widespread testing off the ground, so its recent expansion of coronavirus tests has led the European Centre for Disease Control to say the country had not yet passed the peak of infection, despite figures for intensive care admissions and coronavirus fatalities suggesting this happened several weeks ago.

Still, Nystedt said, in Norrbotten the percentage of those tested who were positive for the virus had gone up, from around 8 percent to around 12 percent, which might indicate that there has indeed been an upturn in infections.

Before Norrbotten started testing intensively, the number of reported coronavirus cases was quite stable in the region, Nystedt said, with between around 30 and 50 weekly new infections. The total amount of cases in Norrbotten amounts to 273 infections per 100,000 people, compared to for example Stockholm, a region that has 676 cases per 100,000 inhabitants, or over two times as many.

He also shared a theory as to what has caused these sudden clusters of coronavirus cases.

Norrbotten has extensive mining industry, and a mine in the area was recently shut down for maintenance. The mining company brought in 800 external contractors, and one or several of them might have brought the virus with them — though LKAB, the company that operates the mine, said only ten percent of the contractors came from outside Norrbotten.

Local elderly care facilities have also experienced recent outbreaks, with the municipality reporting that ‘the curve continues to rise and we now have 39 suspected cases of Covid-19’ in care homes.

“The authorities for social affairs have taken stronger protective measures to protect [elderly care] residents from infection, but unless everyone in the community jointly supports the restrictions and instructions issued by the Public Health Authority, we will soon be back to the same level that we experienced during the Easter holidays,” the municipality wrote on their website last Wednesday.

Around Easter, when Norrbotten hit a peak in coronavirus cases, around 30 people were in intensive care, which indicated that the regional health care services are equipped to admit at least another 20 to 30 patients to intensive care before the system reaches capacity.

Though, of course, they want to avoid this, and are taking steps to flatten the curve as soon as possible, with regional authorities reminding everyone to follow the recommendations in place around hygiene and social distancing, not only for their own health, but also for the sake of “health care workers who really deserve to have summer holidays”.