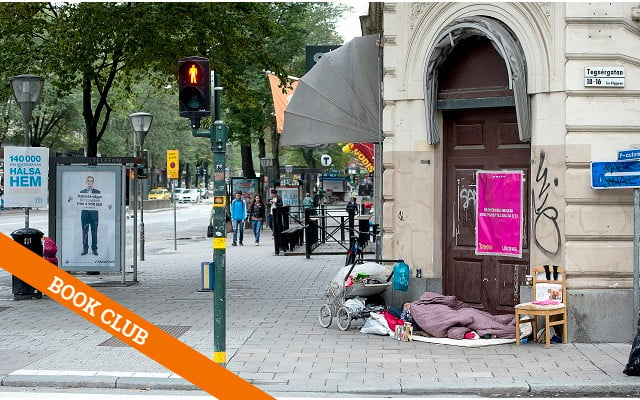 A rough sleeper in affluent central Stockholm; some of our readers felt the book shied away from reporting on where progress isn't happening. Photo: Maja Suslin/TT

The most persuasive parts of the book show how uninformed many people are about key facts, from the rate at which the world population is growing, to the proportion of people living in low-income countries, to the education rate for girls.

He invites readers to take a short quiz at the start, to check if they score better than chimpanzees choosing answers at random would — or if, like the majority of members of the public, UN experts, professors, and world leaders Rosling has tried it out on, they give not only more incorrect answers than the chimps, but negatively-skewed answers. Full disclosure: on my first time taking the test, I got 4 out of 13 correct, and journalists are typically among the worst performers on the quiz. You can take the quiz yourself here.

Rosling then uses data to show where progress has been made in the world, from sharp reductions in the poverty rate to vastly reduced child mortality and major progress in healthcare.

But he doesn't think people are simply ignorant or misinformed.

He's coined terms for the reasons people tend to believe in what he calls an “overdramatic worldview”, one based on incorrect and negatively skewed information. These include a fear instinct (worrying things stick in the mind more); a gap instinct (the assumption that the world is split into two; rich and poor, developed and undeveloped), and so on, and Rosling gives tips on how to fight these biases.

The Local is one of many newsrooms devoting more coverage to reporting on positive trends and progress. That's not a way of replacing the critical or negative reports, but complementing them as these too are a part of the full story.

Getting a full, balanced picture has been at the core of two recent projects at The Local: a cross-European article series examining responses to the coronavirus crisis, and a series of free webinars for migration reporters across Europe. You can read more about how we've worked with that at these links:

In Factfulness, Rosling doesn't shy away form the fact that in many ways, things are still bad, he just asks us to accept that things can be “bad but better”. Several Book Club members still found parts of the book uncomfortable. Rosling presents convincing data that the world is getting better, but other questions are raised and not always answered. Is this progress happening fast enough? Is it happening evenly? Where has this progress started to slow, or even reversing (none of the graphs used to support the arguments show a negative trend)? Have new problems replaced the old ones?

Still, if readers follow the data-driven and questioning mindset the book encourages, it could be more than an antidote to feeling overwhelmed by negative news.

By better understanding the true state of the world, the nature of long-term trends, and the fact that things can indeed be both bad and better than before, we have the tools to act and push for further improvements.

Here's what else Book Club members had to say about the book:

“I really like it. I have found it very interesting and easy to read. I've already found myself using it to make my point at times. I think it's opened my eyes to the fact that Europe and America might very well not always be the most prosperous parts of the world and have actually only been as 'rich' as we are now for a very short period of time in the scheme of things and that this might change in the future. I find the four 'economic' levels very useful and like the thought of eradicating the idea of looking at the world as 'them' and 'us'.” – Magdalena Mobee

“I found his four categories of delineation helpful in looking at disparities within a culture. I can see all four here in the USA.” – Judith Busch

“The book is well written and very informative without being difficult. It's been interesting to realise that the situation is better than we thought and it's interesting to read news now with this new piece of information in our pocket. The author is very straightforward and not very 'Swedish' in this sense, but I really appreciate the way he approaches the different topics, very pragmatic in my opinion.” – Raffaella Bombarda

What to read next: A book with a similar main argument and focus on data, but written in less of an anecdotal style is Enlightenment Now by Steven Pinker. If you're uncomfortable with simply reading about how things are improving and want tips on taking action, pick up How Change Happens by Duncan Green. Or for a different format, find a huge global collection of news articles reporting on where, how and why things are getting better in the Solutions Journalism Network Story Tracker (you'll find several articles by The Local in the collection).

If you'd like to share your thoughts on Factfulness, ideas on what we should read next, or other suggestions for the Book Club, join The Local Sweden's Book Club on Facebook, or send us an email.