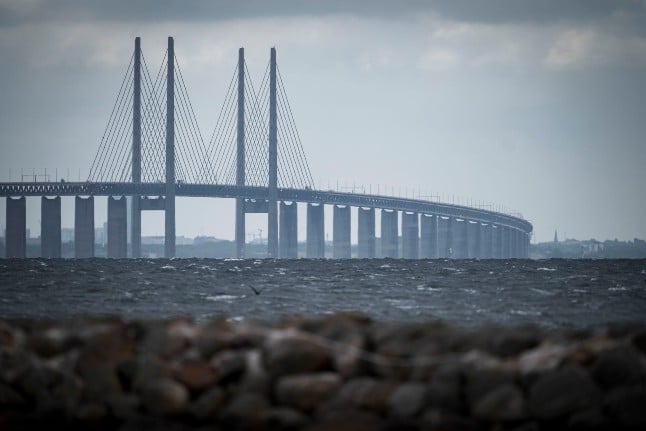 1) It's the tallest bridge or building in Scandinavia

At 204m high, the pylons are taller than both Malmö's Turning Torso building at 190m, and than Herlev Hospital in Copenhagen. And at 82,000 tonnes, the steel and concrete structure is heavy — weighing as much as eight Eiffel Towers. A proposal for the a two-level bridge from 1954.

2) It was first proposed 90 years before it was completed

And it took 30 years to build after Denmark and Sweden agreed to do it.

In 1910, a proposal was made to Sweden's parliament for an underwater railway tunnel across the Oresund Straits between Malmö and Copenhagen, which would cross the island of Saltholm on land. In 1936, a consortium of Danish engineering firms proposed a bridge, which would be built in parallel with a bridge linking Fyn and Zealand.
The governments of Denmark and Sweden then signed an agreement to build a fixed link in 1973, which would have involved a bridge from Malmö to Saltholm, and then a tunnel from Saltholm to Copenhagen. The current bridge stems from a new agreement made in 1991.

3) The bridge's completion was celebrated with a royal embrace

In 1999, the then 22-year-old Crown Princess Victoria of Sweden met her then 31-year-old Danish counterpart Crown Prince Frederik in the middle of the bridge for a symbolic meeting. The two royals embrace at the completion of the bridge. Photo: Søren Steffen/Nf-Nf/Ritzau Scanpix

4) Peberholm, the artificial island at the end of the bridge, still lacks any terrestrial predators

While rabbits, hares and mice have all established colonies on the island, so far no land-based carnivores have made it over the threaten their peaceful existence. The artificial island has also seen more than 400 plant species establish themselves, including rare ones such as Danish astragel and meat-colored cuckoo herb.

The Øresund Dark Fibre Link has cables running in separate tunnel tubes and on opposite sides of the bridge in order to optimise redundancy.

No, the song wasn't, as many thought, about the Severn Bridge, where the car of the band's troubled original singer Richie Edwards was discovered on the day he disappeared.

“It really isn't about that, it's about the Øresund Bridge that joins Sweden and Denmark,” the band's bassist and lyricist Nicky Wire told the Quietus.

7) There have been no deaths or murders on the bridge

While several traffic accidents on the bridge over the years, there have been no deaths on the bridge since it opened, and certainly no gruesome crimes similar to the opening scene of the hit 2011 television drama The Bridge, where a body, cut in half at the waist, is left at the exact centre of the road crossing.

8)  Peberholm is a breeding ground for 30 species of birds

Many of them are rare and protected. There are at least six species of gulls and three species of terns, and different species of waders and geese.

Between June 9th and June 12th, the bridge was shut to traffic and 80,000 people cycled, rolled and ran across the bridge in what the bridge consortium claims is the largest exercise race ever held between two countries.

In the spring of 2020, the consortium launched a repainting project, which will see 300,000 m2 of area repainted and and which will continue until 2032. The contract is expected to cost 300 million Danish kroner.

LANGUAGE AND CULTURE
Why do Swedes and Danes insist on pretending they speak the same language?
Url copied to clipboard!