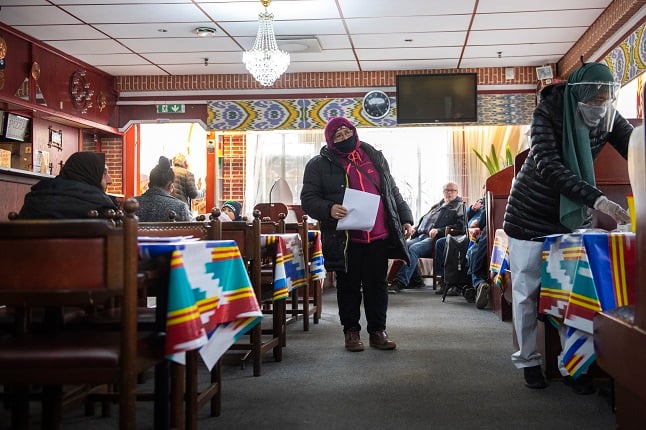 Levels of trust in the Public Health Agency and government were just 46 and 44 percent respectively in Sweden's vulnerable areas, according to a newly published survey.

The survey was carried out by Novus on behalf of The Global Village Foundation, a non-profit organisation which promotes dialogue between authorities and residents of vulnerable areas, defined by police as areas of Sweden with a low socio-economic profile and high rates of criminality.

Among the Swedish population as a whole, trust levels were 71 percent for the Public Health Agency which has led the coronavirus strategy and 63 percent for the government at the time the survey was carried out — though more recent polls show a fall in nationwide trust levels over recent weeks.

Even when it comes to healthcare, trust is lower among residents of the 60 suburbs. Just over half of the surveyed population in these areas had trust in the Swedish healthcare (55 percent), compared to 81 percent in the population as a whole.

Regarding the handling of the coronavirus crisis, people in vulnerable areas reported lower levels of support for how their municipality, employer, and school had responded to the crisis compared to the equivalent figures in the general population.

“Segregation kills. Corona kills too, but faster,” The Global Village Foundation's director Ahmed Abdirahman told The Local. “This low trust has always been there; people in these areas are afraid they will not be treated like everyone else.”

“The current situation has revealed what we are not good at, and where we are lagging behind. That's everything from protecting the elderly to how hospitals work, how do you deal with hundreds of people getting very sick at the same time. In Sweden, the virus has also shown segregation,” he said. Ahmed Abdirahman is the director and founder of The Global Village Foundation. Photo: Henrik Montgomery / TT

In the early phase of the outbreak, two of Stockholm's vulnerable suburbs saw a far higher rate of coronavirus infection, prompting fears that too little had been done to reach their inhabitants with crucial information.

A major multilingual information campaign, including ads on social media and in local newspapers and posters at supermarkets, mosques and community noticeboards, was launched only in late March after the reports of the high infection rate.

“It's difficult to talk about it, and often the media and agencies talk about culture and language [as reasons why the coronavirus hit vulnerable areas hard] and not about real issues – we live in more crowded housing, we have jobs that don't allow us to work from home, we live more inter-generational and don't have the economic resources to rent a bigger apartment,” Abdirahman explained.

“These issues haven't been lifted up so much, people have chosen the easy way out.”

Lower levels of trust may well have contributed to different reactions to Swedish Public Health Agency guidelines, while the survey showed that the vast majority of residents were well aware of the coronavirus outbreak and had changed their behaviour as a result.

The figures who said they were staying at home more in general were almost exactly the same in vulnerable areas and the general population, at 68 and 69 percent respectively.

But there were differences in exactly how behaviour had changed.

Among the Swedish public, 90 percent said they washed their hands more often now than before the coronavirus outbreak, compared to just 65 percent of respondents in vulnerable areas. And just a third of residents of vulnerable areas said they could avoid contact with elderly people, compared to more than two thirds (68 percent) of the general population.

This could be strongly correlated with cultural differences, since these areas are typically home to many more multi-generational households than in the general population, making it harder to limit contact.

And the data records changes in behaviour before and after the outbreak and not, for example, how many times per day people wash their hands. Abdirahman notes that many groups, such as Muslims, who have a higher representation in vulnerable areas, maintain a high level of hand hygiene for religious and cultural reasons. In some respects, people living in vulnerable areas reported taking more stringent precautions than those suggested by the Swedish Public Health Agency.

The agency has said that wearing face masks is not recommended for the general public, saying that it's more important to stay at home if feeling unwell and to practise good hand hygiene and social distancing.

Just two percent of the Swedish population quizzed for the survey reported wearing masks, but that figure shot up to 15 percent in the vulnerable areas.

This could be because people in these locations are more likely to follow recommendations from international media or their home countries, which may be following the World Health Organisation's guidelines.

“Our report shows people listen to other news around the world, so there are more people wearing face masks [in vulnerable areas] because they listen to other media and governments outside Sweden. I think the reason is there's not enough trust because Swedish media has been bad at communicating with these areas,” Abdirahman explained.

Among the general population, 94 percent knew they should stay at home and call a doctor, while in both groups just six percent said they didn't know what to do or would find out in the event that they got sick.

How were the surveys carried out?

The questions were put to more than 2,000 people living in Sweden's 60 vulnerable areas over the phone and online between March 19th and May 15th. The respondents had roots in over 100 different countries.

The answers to questions relating specifically to the coronavirus were collected between March 30th and May 15th, and are based on over 900 responses.

The answers from residents of vulnerable areas were compared with answers to surveys carried out by Novus with 40,000 randomly selected participants, representative of the Swedish population.