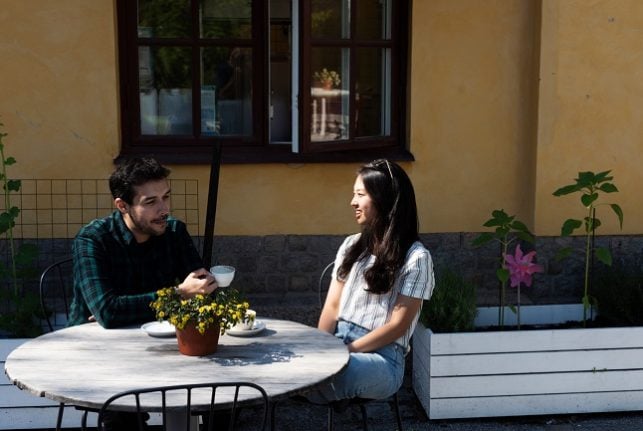 Five couples shared their experiences of living in different countries during a time of uncertainty and closed borders.File photo: Ulf Lundin/imagebank.sweden.se

Since the coronavirus pandemic seemingly turned the world upside down, many people are no doubt going over previous decisions and thinking of what they would have done differently if only they had known what 2020 had in store.

'I've learned to be present and content for what I have'

For Johan, a 25-year-old engineer from Indonesia, the answer is simple. He spent two weeks in Spain last summer with his girlfriend, Helena, and although he enjoyed it, he was preoccupied with worries about his Swedish job hunt.

“Looking back, I wish I had enjoyed it more, now that I'm not seeing my girlfriend this summer,” he tells The Local.

When Johan moved to Sweden two years ago to study a Masters degree, he left behind his girlfriend of three months. The plan was that he would study, find work in Sweden, and Helena would join him after that.

“I had my head down in my studies, with the end goal of getting a job and settling in Sweden. That is also why I didn't go home for two years,” he says.

After graduating and securing a job this summer, the plan was to spend the vacation in Bali with his family and girlfriend. When the coronavirus hit, those plans were shelved — travel restrictions mean he can't go home until his work permit is processed, and his girlfriend can't get a visa for Sweden.

As a healthcare worker, Helena has taken advantage of an airline offer of heavily discounted flights for key workers to book a trip to Sweden in November, but it's still not certain that will go ahead.

In the meantime, the couple have used the extra time at home to spend hours every day on video calls, often watching movies, funny YouTube videos, or playing games together online.

“Her presence definitely cheers me up. Hopefully it helps her relax after eight hours at the hospital wearing the uncomfortable PPE. One thing I have learned from this pandemic is how much time I have lost being in my own head while I was alone, having her call me every day helps me be more present and content for everything that I have,” Johan explains.

“Since she works at the hospital, I often hear about bad news happening to the patients. I'm more than happy that she can go home healthy and fit every day. The joy I get after seeing her in her apartment healthy and smiling is the most satisfying thing.”

'The pandemic closed the door to our relationship'

For American Kristen Lindberg, a trip to Sweden in 2019 to learn more about her Swedish heritage turned into something more when she met her now-partner, who is Swedish-Chilean. Since meeting in Stockholm during her visit, the couple has been able to meet roughly once a month either in London or Stockholm.

But on her February visit, news of a pandemic meant things were different. Kristen wore a mask and gloves on her journey, though no one around her did, and she spent Valentine's Day with her boyfriend.

“We were determined to make it work and so far, it was working. That was the last time I saw him. As soon as I returned to New York, President Trump closed our borders and banned Europeans from entering the United States. We were shut out and now we faced a new challenge in our fledgling relationship,” she says.

“The last time I hugged him was February… and then the pandemic closed the door to our relationship,” she tells The Local. Kristen and her boyfriend sightseeing in London. Photo: Private

On her return to New York, things started moving quickly as travel restrictions were introduced worldwide, and Lindberg's work on a TV series got put on hold. Attempts to be together didn't work out; Lindberg first booked flights to Iceland when it opened up to Americans, but then the country fell in line with the EU's recommendations and her trip was cancelled.

“Sweden was taking a very different approach to the virus and the stark contrast made it difficult for us to understand what each other was going through. I have spent every day watching the updates from the EU. Hoping and praying we can be reunited again, but so far it has been impossible and downright heartbreaking,” she says.

The couple is now hoping that Sweden will offer long-distance couples an exception to entry rules, as neighbouring Denmark has done.

“I don't know what the future holds for us, but what I do know is we have stuck it out during a very hard time and it has brought us closer and strengthened our relationship.”

International development worker Saroza has also struggled with the different approaches in the countries where she and her boyfriend live. She is originally from Nepal and now works in Bangladesh leading a Women's Economic Empowerment project funded by the Embassy of Sweden, where in 2018 she met her Swedish-Bangladeshi boyfriend Joseph, a professional footballer who splits his time between the two countries.

“My boyfriend is an athlete and naturally loves the outdoors and it has been great for him to be back home in Uppsala, where things are much relaxed and normal,” she says. “Whereas for me, as much as my work is needed here during these emergencies, I'm confined within the four walls of my apartment and it has been really tough at times to be away from each other.”

“It has been horrifying that we can't be together for months, especially the way things are now.”

In March this year, Joseph returned to Uppsala in Sweden, with the couple planning to reunite in the summer. Although by this point the epidemic had begun to spread around the world, they both hoped that the situation would have returned to normal within a few months. Saroza adds that the pandemic has pushed the couple to explore the possibility of moving in together and having one base in the nearer future than they had planned.

“This experience has made me realise the challenges that comes with navigating a relationship between non-EU and Swedish lovers. In the meantime, although the time difference makes it difficult to find time to talk to each other, we try our best and are trying to be patient.”

'Even in non-pandemic times, meeting is hard'

Katie Soroosh, an American citizen, has been with her husband, an Iranian with permanent residence in Sweden, for three years and married for two years.

The entire relationship has been carried out across borders, contending with immigration laws — Katie's work permit application has been pending for nine months — and based on visits every two to three months.

“My husband is not able to even visit me under non-pandemic circumstances because of the travel ban on anyone from Iran entering the USA. This has been a sad, expensive, and huge hardship on us. With the pandemic, now I am not able to visit him at all since I can't go to Sweden, and meeting somewhere else is risky and complicated,” she says. On holiday in Greece. Photo: Private

“We have no idea when we'll get to see each other in person next. We've worked on getting me a visa to live in Sweden or him a green card to live in the USA, but neither have yet been successful, and both take many months and even years of waiting. The pandemic has only exacerbated this waiting period, with Trump ordering even more limits to legal immigration to the US and cutting the budget of the agencies responsible for processing immigration cases. Sweden has seen similar difficulties and delays to their immigration process.”

Under the current rules, spouses or cohabiting partners of Swedish residents should be allowed to enter Sweden even if the entry ban applies to their country, but visas remain an obstacle.

“We always used to say that we were so grateful to at least get to visit from time to time while we wait the years it takes for immigration to be possible. Now we don't even have that, with no day in sight to when we will be in each other's arms again,” she says.

For the lucky few, recent easing of travel restrictions means the end of the uncertainty is now in sight.

A 22-year old working in marketing in Tokyo, who asked not to share her name, was looking forward to seeing her boyfriend in Sweden this summer for the first time since January.

The couple have been in a long-distance relationship since they met during her exchange semester at Uppsala University in 2017. They're used to spending time apart, and since the student moved back to Japan they had been meeting in person only every three or four months, but the travel restrictions added a new dimension to the challenge of a cross-border relationship.

A lack of direct flights between Stockholm and Japan means the couple already rely on a transfer in Denmark, so they were affected by Danish border closures even before Sweden and Japan closed theirs.

“My first reaction to the travel restrictions was that it all felt surreal, and the concept of a world with closed borders was really hard for me to grasp at first. It felt strange and quite disheartening to watch it all unfold, as my boyfriend was scheduled to visit Tokyo this April and we were closely monitoring the situation,” she said.

“Over the last couple of months, we accepted that the border closures were out of our control, so we have been trying to live in the present moment and not worry too much about how the virus has been affecting us,” she added.

After the EU recommended opening borders to Japanese citizens and Sweden followed suit, the couple began planning her trip to Sweden — although this depends on how comfortable she feels about travelling and being in Sweden. “Unfortunately it is not clear when that will be, but that is the most actionable thing we can plan at the moment, as most non-Japanese citizens are not allowed to enter Japan,” she said.

Thanks to everyone who got in touch with us to talk about long-distance love during the pandemic. If you want to share your story, whether related to the coronavirus outbreak or about life in Sweden more generally, you're always welcome to contact our editorial team.