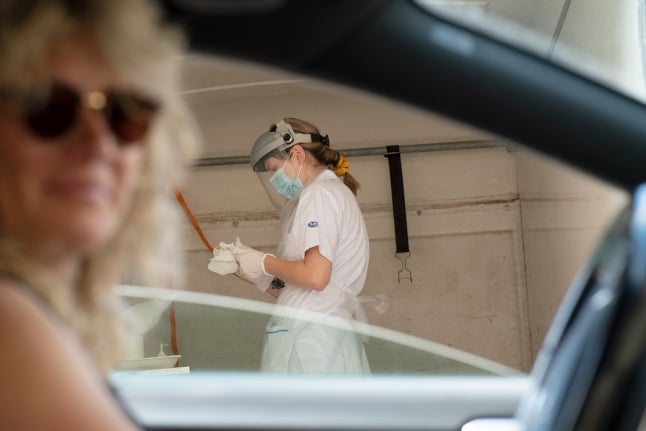 A nurse testing a patient for coronavirus in Sweden. Photo: Mikael Fritzon/TT

If you test positive for the coronavirus you may now be given instructions to call people with whom you have been in contact and may have infected, instead of healthcare staff doing the job for you, or it not being done at all. Similar procedures apply to other infectious diseases in Sweden such as chlamydia.

“It is much better that you and I do it ourselves than having someone sitting at a contact tracing unit doing it for you,” Bitte Bråstad, head of the Public Health Agency's legal department, told news agency TT.

The new guidelines come following a decision by the Public Health Agency on Monday to repeal previous rules on contact tracing, which only passed the responsibility onto the patient in exceptional circumstances.

The new rules, yet to be published, are meant to make it easier to allow the patient to carry out contact tracing.

“The healthcare sector has had to make a whole bunch of decisions to be able to delegate that responsibility and they have not had time for that. It has not been possible. It has been difficult and it need not be,” said Bråstad.

It will be up to each hospital to decide if staff or patients will carry out the contact tracing, and develop procedures for ensuring that the patient has actually contacted possibly infected people.

“There may of course be patients who ignore it and you need to have a system, that you for example report back to healthcare authorities when you have carried out the contact tracing,” said Bråstad.

If a patient is unable to carry out the contact tracing themselves, for example due to dementia, healthcare officials are not allowed to hand over the responsibility. But most people will be able to handle it, according to Bråstad.

“The patient has ordered a test by themselves and you then have to assume that they are able to carry out contact tracing by themselves,” she said.

Swedish health authorities worked intensively at the start of the pandemic to test and trace people with coronavirus symptoms who had been to a high-risk area – however it is now believed that the virus mainly spread via travellers returning home from countries not seen as high-risk at the time.

Sweden has been criticised for scrapping its test-and-trace strategy shortly after the first signs of community infection, and for then taking months to again extend testing to the wider public.

Testing has since increased, and many regions have resumed contact tracing.