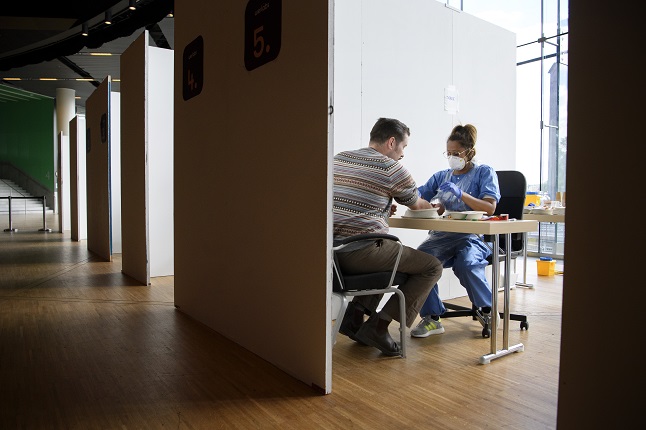 An antibody test carried out by Werlabs in Stockholm. Photo: Jessica Gow / TT

That's according to medical technology company Werlabs, which analysed 83,000 tests in Stockholm, Gothenburg and Malmö.

Across all the tests, 14.4 percent showed a positive result, meaning the person tested had developed the antibody to fight against coronavirus and believed to protect against re-infection for at least a few months. Individuals can choose to do the tests, meaning that these 83,000 are not a representative sample even of these three cities.

“What we see in our measurements is that there is a levelling out of the levels in Stockholm. At the same time it's important to point out that this describes the prevalence of antibodies among the group that chooses to do the test,” said Werlabs CEO Henrik Forsberg. “This group isn't representative of the whole population, but there is great informational value.”

The tests show that the rate of positive tests fell by around one percentage point in Stockholm compared to the previous three-week period, and this was by far the region where most tests were taken: around 80,000 over the first three weeks of July.

In Malmö, where 800 people took the test over the same period, the rate of positive tests fell from 9.4 in the preceding three weeks to 8 percent.

In Gothenburg the trend was reversed, with an increase of one percentage point in the proportion of positive tests, and 15.1 percent of the tests analysed in the first three weeks of July coming back positive.

According to Werlabs, the accuracy of the tests is over 99 percent.

The results mean that even among those who choose to take the antibody tests, antibody levels are far lower than earlier Public Health Agency estimates.

The Public Health Agency said on Tuesday that around 40 percent of people in Stockholm were likely immune, after research from the Karolinska Institute has shown that people without antibodies that can be detected by tests may still have antibodies or immunity at a cellular level.

A lot is still unknown about immunity to coronavirus, including what level of immunities antibodies provide and for how long, though the World Health Organisation has previously said antibodies would likely “provide some level of protection” against re-infection.

Sweden's Public Health Agency has gone further and said that people who have been diagnosed and recovered from the coronavirus are likely immune from re-infection for several months, even if they don't have antibodies – but they warned that members of the public should keep following guidelines around social distancing.