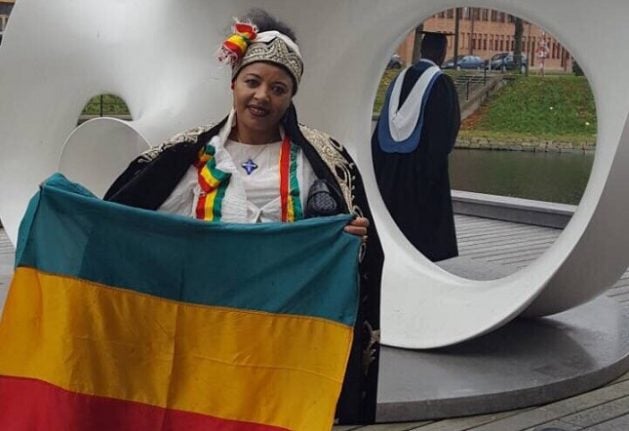 Her restaurant, Abyssinia, serves Ethiopian cuisine in the northern Stockholm neighbourhood of Vasastan, and is filled with furniture, art and music from her home country.

Usually she would serve 50 guests each day, but that number has dwindled to around five since she reopened in June, following two months' closure at the start of the coronavirus outbreak.

“Because of the coronavirus, I closed the restaurant for two months during March and April. I didn't want to be at risk of death. It's me who makes the food and greets people, it would be easy for me to get sick – I was feeling unwell and it turned out it was not Covid-19, but I needed to rest,” explains Emebet.

She told her landlord that she was unwell and couldn't pay the full rent while the business was closed, hoping she would benefit from Sweden's temporary rent reductions, which are targeted at businesses in those industries worst hit by the coronavirus crisis, including restaurants. Emebet has filled her restaurant with furniture, art and music from Ethiopia. Photo: Private

Individual businesses can't apply for this support – that's up to the landlords, who can receive funding from the government to cover up to 50 percent of the reduction.

Emebet says she was initially told the building association would look into this, but didn't hear back until she got a warning for unpaid rent. She says she has approached different government agencies about the rent support, and her legal advisor has contacted the landlord, but has still not received the support.

When The Local contacted the association, they said they had chosen not to grant rent reductions for any businesses renting property in their buildings, because “the rent is already lower than the average for similar properties in Vasastan”.

One government policy Emebet has been able to apply for and benefit from is korttidspermittering, money which covers the cost of reduced working hours. But with the rent as the biggest expense, and knowing other nearby restaurants with different landlords have benefited from the reduction, this is the support she feels her business most needs.

“I'm not asking for extra money, just a reduction on the rent. I'm feeling very down, I don't know what I'm going to do,” she says. The community has rallied round Emebet – one of her regular customers contacted The Local to ask for coverage of the restaurant.

“People living in the apartments asked if I was getting the support, the regulars were asking me what help we were getting and are shocked. This is my whole life, I've spent my life fighting to build this restaurant. This is all I have as a pension,” says Emebet.

She moved to Sweden in 2002, having lived in Norway from the age of 16. There, she had started her own business – a restaurant – aged 18, but lost it in a suspected arson attack.

A visit to Sweden in 1996 to see the Ethiopian Church in southern Stockholm inspired her to make the move. When she asked where to find Ethiopian food near the church, she found out there was no restaurant offering it anywhere in Sweden.

“It clicked right then. It took six years to make the move though; I have three kids, and it's not so easy to move them away from their friends and schools,” she says. “We knew nobody, I had no business contacts, it was just us and my idea.”