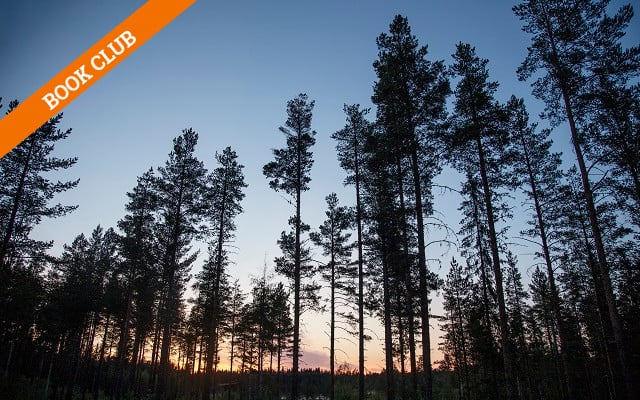 Many of our members found they couldn't put down this book once they started. Photo: Helena Landstedt / TT

Yes, for me this was a novel about oppositions, making Norrland with its endlessly light summers and dark, closed-off winters the perfect setting.

I like books that have an element of the uncanny — that feeling of something strangely familiar, and not quite right. As someone who grew up outside Sweden, the midnight sun is exactly that to me. And I enjoyed the way Jackson resisted the temptation to open the book in the dark, gloomy winters of northern Sweden, and instead started the novel in these eerie sunlit nights.

But for our protagonist Lelle, the 24 hours of sunlight aren't about peace or airiness; instead they mirror his restlessness, unable to sleep properly during the three years since his teenage daughter went missing. He blames himself and his wife blames him too. The extra hours give him time to ponder infinite 'if only's — could he have done something differently and saved his daughter? Is there anything he can do now to make up for it?

Our other main character, Meja, is troubled too. She and her mother are new to the town, and struggling to build a new life. When another 17-year-old girl goes missing (again, there's that uncanny element — she looks strangely similar to Lina), Meja and Lelle's lives become entwined, both determined to figure out what's going on.

There were echoes of Beartown in the portrayal of a small, isolated community, an encroaching forest, and plenty of secrets.

But where Jackson's writing skill really shines is her depiction of the characters, their emotions and relationships.

She takes time delving into each characters' backstory, ramping up the tension before the pace picks up in the second half. For those hoping for a traditional detective page-turner, that might be off-putting, but if you love a book you can really sink your teeth into, I think you'd enjoy this. Be warned: several book club members found themselves unable to put it down once they started.

Here's what else readers had to say about The Silver Road:

“I gulped it down in one evening. I enjoyed the subtle clues. I liked the question of what makes a family. Also, the author addresses how easily it is to fall into shame when we feel we do not live up to the ideal family mores. Most importantly the author addresses that often women can fall victim into thinking a man is their way out of hopelessness. The characters and social issues feel very real to me. I did not loath any of the characters. I felt empathy for all of them,” – Suzette Ehrlich

“When I closed the cover I looked up and said to my wife 'what a good book'. This book is a perfit example of the reason I wanted to join this club. Without the suggestion to read this book I would most likely never have either read the book or be exposed to the writings of Stina Jackson. I now want to read more from this writer. I thoroughly enjoy a well written and dark mystery.

“The descriptions of the landscape, the mosquitos and the smoke used to keep them away… the effect of the endless and long night on both the body and the mind is something that anyone who has ever worked swing work can relate to. You become a different person from those who live a so called normal life. This book started off a little slow to me, but once the foundation was set it speedup. It did indeed speed up. I take my hat off to Stina Jackson as she spun a good story,” – Bradley Melton

“I read it in a day! I think generally it was well written but as I read so many of this genre, i figured it out pretty early on. However the social subtext was equally interesting: the mother who was always relying on a man to 'save' her, the teen that felt obligated to take on far more that she should have to, the distraught father who, in the end, finds another daughter. Highly enjoyable and a very good read,” – Samantha Hammell

If you'd like to share your thoughts on The Silver Road, ideas on what we should read next or other suggestions for the Book Club, join The Local Sweden's Book Club on Facebook, or send us an email.