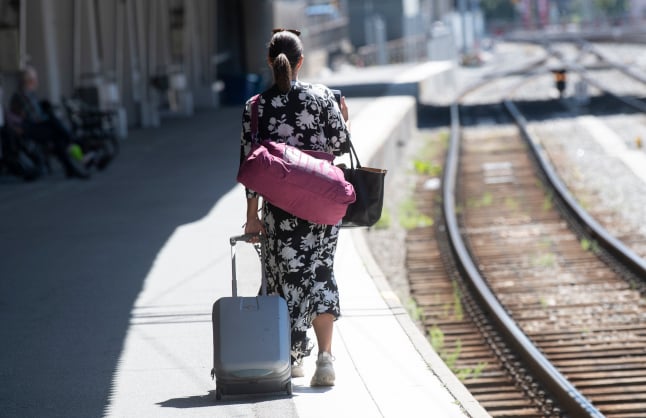 A passenger on an almost empty platform in Sweden. But that's not always the case. Photo: Fredrik Sandberg/TT

Swedish rail operator SJ has been criticised for overcrowding on several of its trains this summer, with even the Public Health Agency's director-general Johan Carlson telling the Dagens Nyheter newspaper last month that he had found one of his own train journeys so busy it was “honestly somewhat unpleasant”.

It is not possible to book a seat on several of SJ's regional trains, as opposed to its long-distance trains, which makes it harder for travellers to anticipate which train departures may be crowded.

SJ has now published a list of its most popular departures, to help passengers avoid these trains.

Some trains in particular tend to fill up fast, partly because of people commuting to and from work, for example Stockholm-Uppsala and Gothenburg-Västerås. You can read the full list here. It is not published in real-time but according to SJ its staff will monitor traffic and update the page regularly.

There are no restrictions on travel for leisure within Sweden. However, it is recommended that you use means of transport where you can book a seat if possible, keep following all the other health and safety guidelines on your journey and at your destination, and avoid travelling during rush hour if you can.

The current recommendations from Sweden's Public Health Agency are to work from home “if possible” to reduce crowding on public transport, making it safer for those who cannot work remotely.