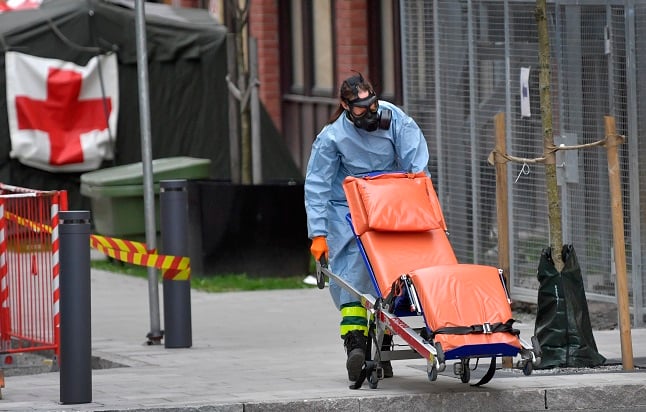 Instead, the majority were cared for at the residences, many of them even dying there.

The National Board of Health and Welfare (Socialstyrelsen) has been publishing regular statistics on the number of people in care homes who died of Covid-19, the disease caused by the coronavirus.

Since then, the proportion of residents who have received hospital care for the coronavirus has likely remained the same, according to Henrik Lysell, head of statistics at the agency.

“I don't see any apparent reason why it would look different today; I would think it's about the same,” he wrote.

Separate figures from the agency show that care home residents make up only a small proportion of Covid-19 patients in hospital; around five percent or 1,093 of 20,929 people according to National Board of Health and Welfare data from August 5th.

That's despite the fact that this demographic has made up the majority of coronavirus deaths. But the statistics also show that care home residents who fell ill with Covid-19 were more likely to be treated in hospital than over-70s in the general population.

“Statistics alone cannot show if people at care homes got too much or too little hospital care,” Thomas Lindén, Sweden's chief medical officer and a department head at the agency, told TT.

“The group [of care home residents] is generally more fragile and ill, and more often cannot benefit from hospital care. In that case, it may be the correct judgment to keep Covid patients at the home,” Lindén said.

Even before the pandemic, the agency has criticised the way palliative care is carried out for the elderly. He added: “One thing that we repeatedly criticise in our evaluations is that people at the end of their lives are taken to hospital without any benefit to the patient. It's too common.”

Even in normal times, not every seriously ill patient is admitted to intensive care. The treatment on these wards is tough and if doctors judge that a patient would be unlikely to survive the treatment, for example due to risk factors linked to old age or other illnesses, or if they judge that the patient would be put through unnecessary pain without affecting the outcome of treatment, they may decide against admitting them to the wards. Systems of this kind are in place in all countries, but the exact criteria for the decision-making process vary.

Sweden has faced criticism that decision-making during the pandemic has been too narrow, with Sweden's Health and Social Care Inspectorate (IVO) investigating intensive care admissions in the Stockholm region.

Some reports submitted to IVO said that some coronavirus patients who normally would receive intensive care are not receiving it, and that the decision-making process differed between hospitals even within regions.

Asked by TT if more care home residents could have survived the virus if given hospital care, Lindén only said it was impossible to know until the review was completed.

“IVO's continued investigation will show this,” he said.

However, Karolinska Institute professor Lars L Gustafsson, a specialist in elderly healthcare, said the reports were concerning. He emphasised the importance of individual assessments from a doctor – which IVO says were not always given – and believes care home residents did not receive sufficient hospital care.

“I think there has been a fear of referring people to hospital, since it was being said that hospitals were completely overwhelmed, especially at the start of the pandemic,” he said.

Sweden's hospitals and intensive care units have always retained available capacity, though this has varied between regions and hospitals.