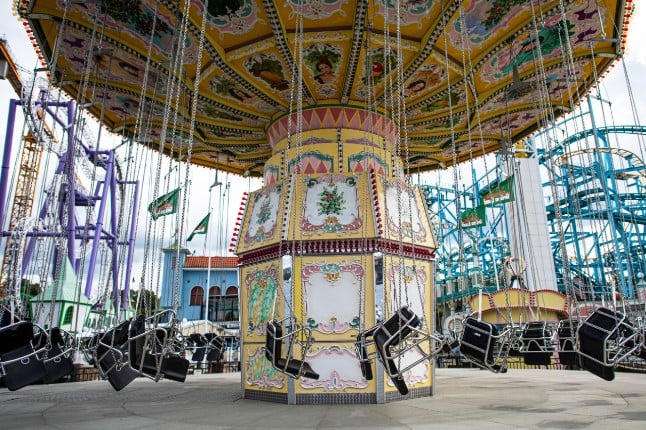 Amusement parks have stayed closed this summer in Sweden. Photo: Ali Lorestani/TT
Why have zoos been allowed to open in Sweden, but not amusement parks? And why can well over 50 people go to an apartment store, but not watch a football game or theatre performance?
On Sunday March 29th, Sweden banned public gatherings and events with 50 participants or more, with police empowered to break any such gathering up, and organisers facing a fine or six month prison sentence.
But while Denmark last month allowed gatherings of as many as 100 people, and Norway gatherings of up to 200 people if such a meeting can be held safely, Sweden has stuck doggedly to its limit.
What does the ban on gatherings of more than 50 people actually cover?
The ban only applies to activities that can be classed as public gatherings or official events. It applies both to indoor and outdoor activities whether or not they would otherwise require any sort of public permit or approval. Theatre performances such as this performance of The Crucible are off limits. Photo: Karin Wesslén/TT
What constitutes a public gathering or official event?
They might include: theatre performances, cinema film showings, concerts, funfairs, festivals, demonstrations, lectures, religious services, and conferences.
Why doesn't the ban apply more broadly?
The government has used a clause in Sweden's Public Order Act, but that clause can only legally be applied to public gatherings and official events, and that doesn't include shops or zoos.
But how can for example Kolmården Zoo have some parts open and others closed?
Looking at animals doesn't constitute a public gathering or official event under the law, and therefore zoos are not considered banned. However, funfairs and similar activities are considered public gatherings, which means that amusement parks are considered forbidden. At Kolmården outside Norrköping, the zoo is open but the funfair is closed. Photo: Pontus Lundahl/TT
What happens if someone breaks the ban?
Organisers face fines or even a prison sentence of up to six months.
How long can the ban continue, and who decides on this?
When the ban was brought in in March it was a government decision taken on the advice of the Swedish Public Health Agency, and the Swedish government will retract the ban when it no longer considers it necessary to limit the spread of the disease.
This, however, will be done in dialogue with the agency, which so far continues to see the ban as necessary.
Amanda Lind, Sweden's minister for culture and sport, has faced growing pressure from the sport and cultural world to lift the limit, but has said it will be several weeks before a decision is taken.
But surely, Covid-19 does not care whether an activity is a public one or not?
Correct! This is why the Public Health Agency has also published special recommendations for organisations and activities where many people gather but which cannot be regulated under Sweden's public order legislation. Clubs offering contact sports such as Judo have had to alter their training to make it safer. Photo: Anders Wiklund/TT
Which organisations need to follow these special recommendations?
Shops, shopping centres and department stores: the number of customers in the shop at any one time should be limited. Alternatives should be found to queuing at tills so that customers remain as far away from one another as possible.
Sports clubs: Training and other sports activities should as much as possible take place outside, and only if they don't risk spreading the infection. Otherwise they should be cancelled.
Public transport: The number of travellers should be limited and the number of departures increased if necessary to reduce crowding.
What happens if these institutions do not follow the recommendations?
Not so much. Unlike in the case of public gatherings, police cannot intervene and organisers do not risk fines or prison.
What laws apply to restaurants, bars and similar institutions?
On July 1st, a new law was brought in imposing temporary infection protection rules to reduce the spread of the virus in restaurants bars and cafés.
They are responsible for making sure that there is no crowding among guests. Local municipalities have the right to close down institutions that do not follow the rules. The rules are in place until the end of the year.