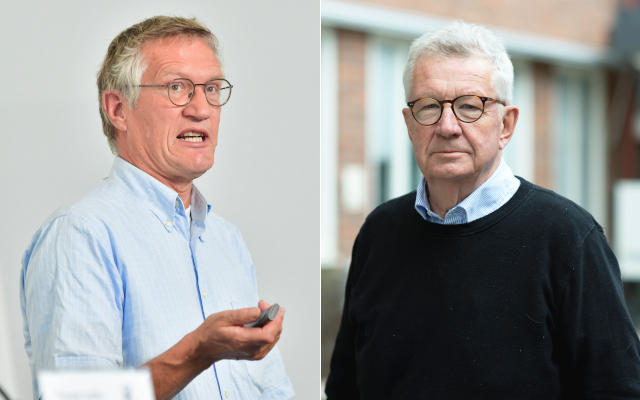 Much of the coverage has centred on one email, published here by freelance journalist Emanuel Karlsten, which several critics of Tegnell's approach argue proves that, as late as March, he didn't understand herd immunity or how the different reproduction numbers, Ro and Re, work.

But in the email, from March 19th, Tegnell – the face of Sweden's coronavirus strategy – does not expressly ask Giesecke to explain the R number, which is, after all, one of the most fundamental concepts in epidemiology.

He instead seems to be brainstorming ways to explain to the public that you don't need to have full herd immunity – which requires 60 percent to 70 percent of the population to have been infected or vaccinated – for partial immunity to have an effect on the rate of spread.

“Surely it has to be the case that as immunity rises in the population, the rate of spread of the disease decreases,” Tegnell wrote in the email to Giesecke on March 19th. “So it's obviously not the case that when you reach herd immunity everything stops all of a sudden. Is there a way of modelling how the spread comes to a halt?”

Giesecke hired both Tegnell and Tegnell's boss Johan Carlson, when he himself was state epidemiologist between 1995 and 2005, and has been a frequent and forceful defender of Sweden's coronavirus strategy in the national and international media, raising hackles in Norway by dismissing the country's approach as wrong-headed.

The emails suggest that even in his retirement, Giesecke continues to hold significant influence.

“Absolutely correct,” Giesecke answers, and then elaborates: “Ro is right at the start, then you usually start talking about Re ('e' for 'effective'), which reduces over time and gradually sinks below 1. Then the infection rate becomes less and less. It should be easy to illustrate.” Karlsten, a Swedish freelance journalist who published the emails after submitting freedom of information requests to the Public Health Agency of Sweden and the Karolinska Institute, where Giesecke is Professor Emeritus, wrote in his blog that he interprets the email exchange as a sort of brainstorming between close colleagues.

“Everyone who has been in a workplace knows that sometimes you have to ask stupid questions to those around you, particularly when you have to take major, extremely serious decisions,” he wrote in an article putting the email in context. “And that's exactly the kind of question Johan Giesecke interprets it as.”

Tegnell's mentor
Johan Giesecke was Anders Tegnell's second most frequent correspondent between March and July, according to Karlsten, sending the state epidemiologist 160 emails, of which Tegnell replied to 61.
In some ways that's not surprising given the two's close relationship, with Giesecke famously describing Tegnell and Johan Carlson, the agency's now general director, as “my boys”.
Tegnell received even more emails, 175, from Jan Albert, the Karolinska Institute's current professor in infectious disease control and virology.
But while Albert has clearly been an important advisor on the science, he has had a much lower profile in the media.
In a sense there is no reason why Tegnell should not call on one of his predecessors, who is after all one of the world's most respected epidemiologists, for advice. But that does not mean the emails do not raise questions.
Over in two months
In a follow-up article published in the Expressen newspaper, Karlsten highlights an early email Giesecke sent in March to Tredje AP-fonden or AP3, a Swedish pension fund, which employed him at the time as a consultant.
“I believe the virus is going to sweep like a storm over Sweden and infect basically everyone in one or two months,” Giesecke writes. “I believe that thousands are already infected in Sweden. (…) It will all come to an end when so many have been infected and become therefore immune that the virus has nowhere else to go (so-called herd immunity).”
In the email, he argues that for the majority, the infection will be like a normal cold and that most won't even notice they are infected, and the course of the outbreak would take “one to two months”, with the pandemic peaking in early April. This has turned out to be rather wide of the mark, with coronavirus spreading haphazardly in clusters and outbreaks rather than as a wave, meaning large regions of Sweden have had relatively few sick even after five months.
Even in Stockholm, the centre of the pandemic, no one believes that even half the population have been infected, let alone everyone.
Giesecke's predictions look a bit better when it comes to the peak load for the health system, which as he predicted came in April (although later in the month than he expected).
Following the flu curve
Another series of emails discuss modelling the coronavirus on flu.
Tegnell's counterpart in Norway, Frode Forland, and his immediate predecessor as state epidemiologist, Annika Linde, have both accused the Swedish Public Health Agency of failing to adapt a pandemic strategy and approach designed for influenza.
“I've had an idea,” writes Giesecke on March 15th to Tegnell's deputy Anders Wallensten and the agency's analysis head Lisa Brouwers.
“One could take a cumulative curve of deaths from influenza over the 2018-2019 season and gradually lay that over the curve for coronavirus in the same graph,” he proposes.
“If the numbers for influenza are suitable it could be interesting (and also hopefully 'politically' useful) to see if the corona curve follows the influenza curve over time.” Wallensten calls the idea “interesting”, but suggests they should consider whether such a graph would be “pedagogical or risk making us seem like we're neglecting corona”.
Annasara Carnahan, one of the agency's epidemiologists, criticises the proposal, arguing that “either it fuels fear or it minimises the mortality of Covid-19”. Karlsten reports in the article that another unnamed staff member said they were “unsure it would be smart to put out a 'quick and dirty' result at this point”.
“People aren't going to be less worried because we show it's even worse with influenza,” they said.
Giesecke then complains to the agency's head of analysis Lisa Brouwers: “Why have your statisticians/investigators so many opinions over how data is to be used?”
She replies: “Haha, yes, it's both good and sometimes irritating.”

Influencing policy?
The flu graph discussed above was in the end never published. Another email which has been getting attention on social media is one from March 27th, when Giesecke proposes reopening upper secondary schools and universities for on-campus tuition, asserting, that the closures “play no epidemiological role”.
“I think we should relax the closures of upper secondary schools and universities after Easter. They play no epidemiological role and it would be a signal of change for the better,” he said.
“I think it's a shame for everyone who is in the third year [of upper secondary school]. It's sad that they won't be able to celebrate their final exams after 12 years in school. All the best, Johan (after a glass of wine at Friday dinner).” But, like several of Giesecke's emails, it was ignored. The policy was not relaxed until the end of June.
Proper procedures?
The emails also show how Tegnell asked Giesecke to start working for the Public Health Agency as a paid consultant with a message written in the title line of an empty email simply saying “do you have time or the inclination to work here?”.
The contract was signed on April 12th, but Giesecke then went on to appear on international and national Swedish media without explicitly informing anyone he was being paid by the agency (although it was not kept a secret either – an article in the DN newspaper in May referred to Giesecke as a consultant for the agency). He then billed the agency for his media work, even though media work was not included in the contract (the Public Health Agency said when questioned by journalists that the invoices were wrong and would not be paid out).
After being approached by Karlsten for comment, Anders Tegnell said that there was nothing wrong with consulting with an external expert.
“Consultation with external experts goes on the whole time, but never has more influence than their relevance [deserves]. It is always the collective opinion of the agency that counts.”
He said that his own personal relationships did not impact on the decisions taken by the agency.