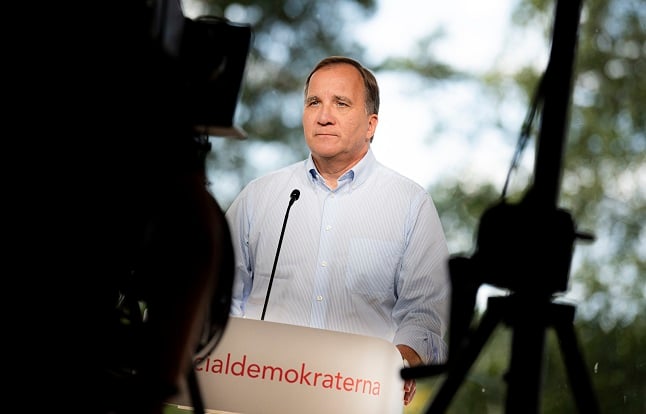 Prime Minister Stefan Löfven said the crisis should be the catalyst to "build something better". Photo: Pontus Lundahl / TT

“Sweden has gone through a tough time during the new coronavirus. Weeks have felt like months, sometimes years,” Prime Minister Stefan Löfven said, reminding viewers that the crisis was not yet over.

The leader of Sweden's largest opposition party, the Moderate Party's Ulf Kristersson, gave his annual speech on Monday, the day after Löfven's. His tone was harshly critical of the Social Democrat-Green government, reinforcing that the political peace of the early months of the pandemic is now over.

Here's a look at three key points from the talks.

1. How to improve elderly care?

Löfven admitted that the coronavirus had highlighted weaknesses in Swedish welfare, and said that the country shouldn't aim to return to how things were before the crisis, but to “build something better” — especially when it comes to elderly care.

“It's not reasonable that among municipal care home staff in Stockholm, four out of ten are part-time employed with hourly salaries. It's not reasonable that four of ten Swedish care home employees say it is hard to combine work with family lives,” he said. “We need to end this now. There has to be a contract between the generations, where no-one should need to fear growing older.”

The government has previously announced an extra 2.2 billion kronor to be allocated to care homes in 2020 and 2021, and Löfven did not go into further details of concrete proposals, but pledged that Sweden would have “the world's best elderly care”.

Kristersson began his own speech by talking about his mother, who died this spring in an elderly care home after becoming infected with Covid-19. He argued that there should be greater focus in Sweden's coronavirus strategy on contact tracing and quarantine of infected people, so that elderly people do not have to remain isolated.

“I really feel for those of you who have been forced, month after month, to live isolated from children, grandchildren, and friends. It can't just carry on like this,” Kristersson said.

Over-70s are still advised to limit their social contacts and avoid busy places like shops, but have been encouraged to socialise with others at a distance, for example on walks or playing boules outdoors. Care homes have also introduced measures to allow for outdoor visits, while the National Board of Health and Welfare has also said that people with a positive antibody test could be allowed to enter homes for visits. Both speeches were held digitally this year. Photo: Pontus Lundahl/TT

The topic of gang crime was also in the spotlight, particularly after the fatal shooting of a 12-year-old girl in a Stockholm suburb in early August. She was reportedly hit by a stray bullet aimed at two men with alleged links to a criminal network.

Kristersson called gang crime “Sweden's second pandemic” and criminals “Sweden's domestic terrorists”, noting there have been 210 shootings and 24 gang-related deaths in Sweden in 2020. He was harshly critical of the government response to gang crime, saying: “Stefan Löfven is not leading the work against the criminal gangs. At first he did not see them coming. Now he lacks the power and the concrete policy.”

The Moderate Leader suggested extra tools to deal with this type of crime, including harsher penalties for gang-related criminals, wire-tapping, and increased possibilities for witness anonymity.

Löfven also addressed the subject of gang crime, saying that such incidents “fill me with anger but also with determination”, and that there was “no place” for gangs in Sweden.

According to Kristersson, the focus of the autumn must be on getting the country back to work. “Those who can work must work. Crisis measures must be temporary and in the long run companies must compete on their own merits, not with government subsidies. Unemployment and increased unemployment benefits are a proven way into dependency on benefits,” he said.

Stefan Löfven meanwhile spoke about the measures that his government, together with the Centre and Liberal parties, took to support employers and businesses, such as a system for short-term lay-offs, increased unemployment insurance, and tax deferrals.

“There are parties in the Swedish Parliament that think that cuts in welfare and social insurance should pay for the package of measures. That the best incentive measures are large tax cuts for already well-off people. We do not believe in that,” he said, stressing that his party would “always choose welfare”.

“Now we have a historic opportunity to do the things that both keep the wheels [of society] rolling but also solve the societal problems that the corona crisis made all too clear,” he said.

As winter approaches, it’s a good time to check that you’re up to date on your booster shots.

If you’re aged 12 or older, the agency recommends that you should at least have completed your primary dose of the vaccine, which comprises two shots. Because vaccine efficacy wanes over time, if you are aged 18 and above, you should have already had your third dose.

The booster dose, called a påfyllnadsdos, can be administered a minimum of four months after the primary dose or the most recent booster. A booster shot is recommended even if you have tested positive for Covid-19 since your most recent vaccination, because the protection offered by a vaccine is more reliable than that offered by an infection.

A third vaccine, an adapted version of the mRNA Covid-19 vaccine Comirnaty (Pfizer/BioNTech), is expected to arrive in Sweden in October.

READ ALSO: When will the new Covid-19 vaccines be available in Sweden?

The höstdosen, or “autumn vaccine”

On September 1, the agency issued new guidelines for a höstdosen, or autumn vaccine dose.

During the campaign, all adults aged 18 and over who belong to an at-risk group are recommended to get a booster dose, as are seniors aged 65 and above.

Risk categories include people who are pregnant, have a weakened immune system, have heart and lung diseases, or have Down syndrome.

You can get the autumn booster regardless of how many vaccine doses you may have received, which means it might be a fourth shot for some people, and a fifth for others.

The autumn vaccine is also available for those aged 18-64 who do not fall into any of the at-risk categories but would like a fourth dose. The Swedish Public Health Agency has said that regional health providers must make booster doses available to those who want them. 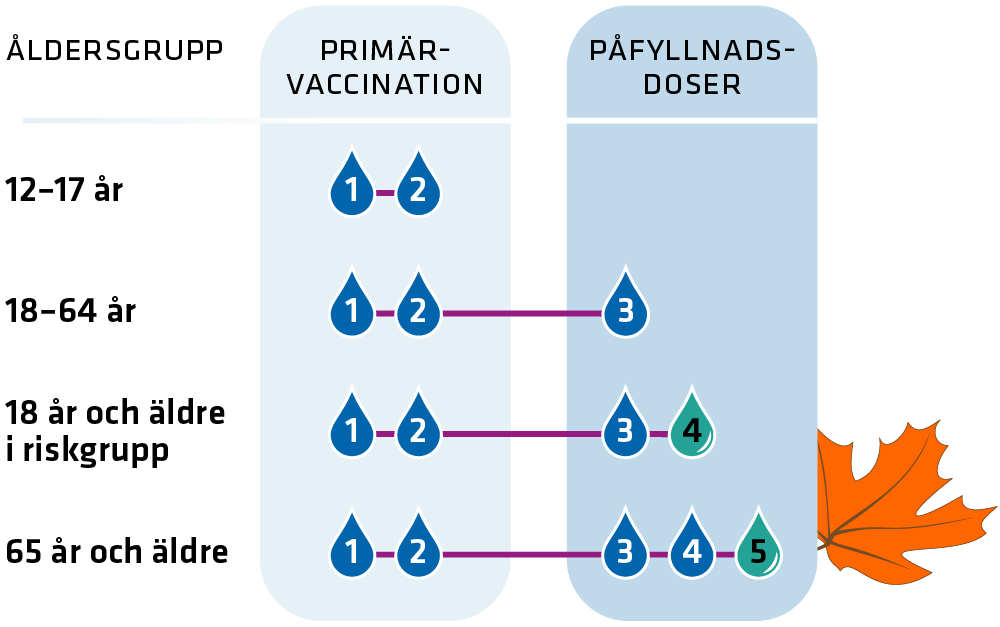 How do I get an appointment for the autumn dose?

Region Stockholm has been offering appointments for an autumn vaccination to everyone over 18 since September 12th. You can book a dose through the Alltid Öppet app.

In Region Skåne, the region responsible for healthcare in Malmö and Lund, appointments for an autumn vaccine have been available since August 22nd. Appointments are available for vaccinations in Region Stockholm, as are drop-in times at locations listed on 1177.se.

In Region Västergötland, the region responsible for healthcare in Gothenburg, health centres, or vårdcentraler, are prioritising people aged 80 and older.

Those in other categories, including at-risk adults 18 and older and seniors over 65, are requested to make their vaccination appointments with other providers through 1177.se.