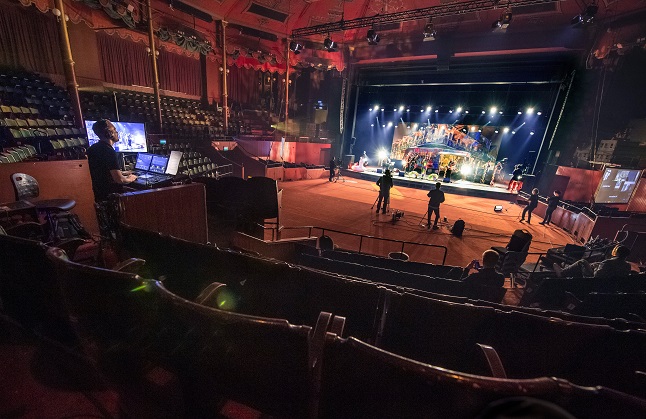 A concert performed to an empty venue in Stockholm this spring. Photo: Claudio Bresciani / TT

The Public Health Agency has suggested raising the limit for public events from 50 people to 500, for certain events only – those with designated seating and social distancing.

It follows a government proposal to introduce exceptions to the current 50-person limit. The government put together its suggestions and shared them with relevant authorities, and now the Public Health Agency has given its response.

Which events would this apply to?

The limit of 50 people applies to applies to events such as concerts, conferences, and sports matches, but not to private events such as parties or weddings, or in places like schools, workplaces or shopping centres (which have no suggested cap, but should follow other infection prevention guidelines).

But it doesn’t mean all public events can instantly increase their attendee numbers.

The Public Health Agency recommended making the change only for events with designated seating, where all attendees would be seated at least one metre apart. That’s actually lower than the government’s proposed distance of two metres between attendees, and the Public Health Agency wrote that the risk of infection is significantly decreased at one metre, although it reduces further at two metres, in line with World Health Organisation guidance. One metre is the distance required between groups of guests at restaurants and pubs in Sweden.

It would apply to both indoor and outdoor events that meet this criteria.

The Public Health Agency also suggested changing the wording from the government’s proposal so that the one-metre distance should apply to all participants in an event and not just attendees.

And it noted that exceptions may be required for young children and people with disabilities.

In their own answers to the government proposals, Swedish police said it would be complicated to have different limits for different kinds of events. Allowing up to 500 people at a restaurant concert, but not at outdoor demonstrations or races, for example, could be difficult to explain or enforce, they said. The current season of the Allsvenskan football league has taken place in front of empty stands. Photo: Christine Olsson/TT

Why is this happening now?

The agency’s suggestion comes after the government said it was looking into ways of safely easing the restrictions on events. The government proposal didn’t include a new limit, so it asked the Public Health Agency to suggest one, based on what we know about how the coronavirus spreads.

The culture and sports sectors have been hard hit in Sweden, as elsewhere, by the economic impact of the coronavirus.

Interior Minister Mikael Damberg said that a blanket 50-person ban was a “blunt tool” given that different venues and organisers have different capacities to ensure social distancing.

In its comments, the Public Health Agency wrote: “This limit is a far-reaching restriction of the constitutional
freedom of gathering and demonstration, but it has been and remains a part of effectively reducing the spread of Covid-19. However, such a restriction must not go beyond what is necessary.”

It also comes after the summer saw a sharp drop in the infection rate in Sweden – although it’s likely this was due to different patterns of behaviour during the summer holiday.

How does this compare with other countries?

Sweden has generally taken less strict measures to curb the spread of infection. It is one of few countries not to have imposed any limits on private events and gatherings, for example by putting any cap on the numbers of households that can meet at one time. But with its 50-person limit on public events, it is actually currently among the stricter countries in Europe when it comes to mass gatherings.

Neighbouring Denmark allows up to 100 people to gather in one place, which can be increased to 500 if certain criteria are met. It had planned to increase this limit to 200 in August, but chose not to due to a rising number of infections.

In Germany, there’s a ban on large events of over 500 people, while for private parties the limit is 25, but can be extended to 50 for private events in public spaces such as weddings.

In France, public events for up to 5,000 people may take place. Local authorities may grant exceptions for even larger gatherings, unless the event is in a ‘red zone’ with a high infection rate, but these are rare.

In the UK, the limit remains 30 people for most gatherings, including private events like weddings, although businesses may host larger events if they comply with government guidelines.

However, they also asked for suggestions from other relevant authorities, including the police — who have said it would be problematic to introduce different limits of attendees for different kind of events, and that they didn’t have the resources to enforce the suggested changes.

The changes would come into effect on October 1st, according to the government’s proposal.

Then it’s a question of monitoring these events, to see whether venues are actually able to ensure social distancing and whether the changed rule has any impact on Sweden’s infection rate.

“It will take a decent amount of time, a few months, before you know if there is any effect,” explained state epidemiologist Anders Tegnell at a press conference on August 27th.

One potential issue raised in the proposals is that large events can put pressure on public transport, so event organisers should have the responsibility to ensure attendees can get there without crowding on trains and buses.

Once enough data has been gathered, the agency has said it will consider making suggestions for further changes, depending on how the epidemiological situation develops in Sweden and any effects of this initial change.