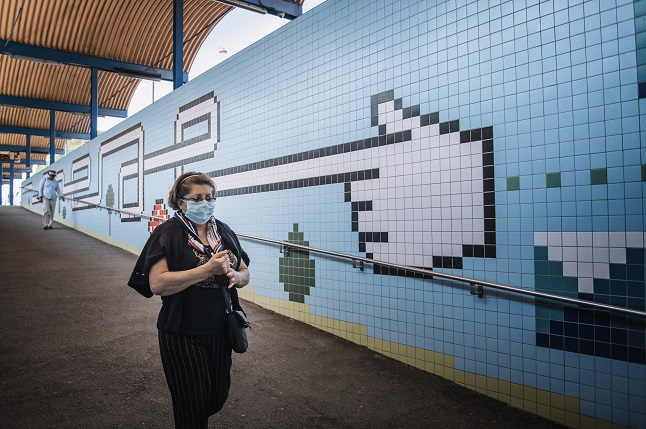 While most of the world has come to terms with covering their noses and mouths in crowded places, people in Sweden are going without, riding buses and metros, shopping for food, and going to school maskless, with only a few rare individuals covering up.

Public health officials here argue that masks are not effective enough at limiting the spread of the virus to warrant mass use, insisting it is more important to respect social distancing and handwashing recommendations.

“I think it's a little bit strange. Sweden, as a small country, they think they know better than the rest of the world. (It's) very strange,” says Jenny Ohlsson, owner of the Fröken Söt shop selling colourful fabric masks in Stockholm's trendy Södermalm neighbourhood.

The Scandinavian country has the world's seventh highest death toll at 575 per million inhabitants, mainly due to its failure to protect the elderly in nursing homes in the early stages of the pandemic.

Sweden never closed its schools, businesses or cafes and restaurants, allowing the virus to circulate, and has had a consistently high level of community transmission.

But unlike many countries in Europe seeing a resurgence of cases — such as France, the Netherlands, Germany, Belgium, Spain and Italy — Sweden's data now seem to be pointing in the right direction: down.

Its daily death toll peaked in April and is now down to a couple of deaths a day, the number of cases have been in steady decline since early June, and its R-number has pretty much stayed under 1 since early July.

Sweden's public health officials say they see no reason to change their strategy given the seemingly positive trend — including their stance on masks. State epidemiologist Anders Tegnell of the Public Health Agency insists scientific studies have not proven that masks are effective in limiting the spread of the virus, suggesting they can do more harm than good if used
sloppily.

“There are at least three heavyweight reports — from the World Health Organization, the (EU health agency) ECDC and The Lancet report that the WHO cites — which all state that the scientific evidence is weak. We haven't carried out our own assessment,” he recently told reporters.

KK Cheng, an epidemiologist at the University of Birmingham's Institute of Applied Health Research, told AFP that such reasoning was “irresponsible” and “stubborn”, and called on Sweden to change tack.

Tegnell insists Sweden's numbers have gone down since routines were improved at nursing homes, and because people now stay home when they are sick, work from home, and respect social distancing.

Sweden's Nordic neighbours were long holdouts on the mask issue as well, but they have all changed their tune in recent weeks.

Finland now recommends wearing masks in public places, Norway advises it on Oslo public transport, while Denmark has made it mandatory on all public transport and in taxis.

A group of 23 doctors and researchers in June urged Tegnell and the Public Health Agency to reconsider the no-mask policy in an editorial in daily Aftonbladet, a call that has been repeated at regular intervals since then, by
them and others.

Tegnell's standard response is that public health officials are “keeping an eye on” the issue and could introduce the measure if deemed necessary. It remains to be seen whether Sweden's COVID-19 transmission will continue
to decline. Stockholmer Gilbert Sylwander, 69, peruses the masks at Ohlsson's shop, admiring the bright designs. He says he has faith in the Swedish Public Health Agency's strategy.

“It seems as if they were right about many things with their research,” he tells AFP.

He does not wear a mask, but would if it were official policy.

“If everyone else is wearing a mask and they are afraid of being contaminated, of course I will use a mask, just to be polite to other people. But since this is not the case here…,” he says, his voice trailing off.

By Pia Ohlin and Tom Little