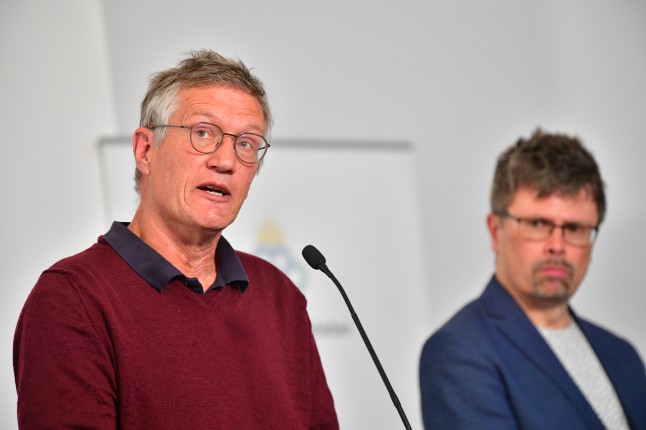 Sweden's state epidemiologist Anders Tegnell, left, with the Civil Contingencies Agency's Svante Werger (not quoted in the article) at one of the daily press conferences. Photo: Jonas Ekströmer/TT
On February 3rd, three days after the first case of coronavirus was reported in Sweden, the Civil Contingencies Agency (MSB) – which is responsible for preparing for emergency situations in the country – sent out a questionnaire to 17 Swedish government agencies, from the police and rescue services to the Swedish Board of Agriculture, about their internal organisational capacity to face what would later turn into a pandemic.
The questionnaire and the various agencies' answers, have now been obtained by the Swedish journalist Mats Engström, who wrote about them on his blog.
READ ALSO:
“The scenario is hypothetical and is being used so that various actors will be able to analyse a possible chain of events from a worsened situation,” Jakob Wernerman, the head of the agency's new Covid-19 unit, wrote in his introduction to the questionnaire.

The scenario he put forward would see “a certain spread of the infection in Sweden, at the same time as the spread in China has not levelled out and the number of cases globally continues to rise”.

This would in turn affect global trade with China, border controls would be put in place by several countries, global financial markets would be affected, there would be significant public worry about the spread of infection and the authorities' handling of the crisis, and stigmatising of infected people and people from countries heavily affected, according to MSB's scenario – which has by and large played out as predicte
When asked in the questionnaire what challenges the agency foresaw concerning “resources (personnel and materials), obtaining information, and communication”, it gave an answer which the Civil Contingencies Agency took as a rebuke, a shot across the bow warning, telling it not to cross over into the Public Health Agency's territory.
“The challenges are to calm down the [other] agencies which lack the right knowledge, so that they do not overreact, at the same time as handling the public that are worried or spread untrue information,” the answer, which you can read here, read.
To a follow-up question, “What possible measures could you take at present to prevent and prepare for a scenario similar to the one above?”, the agency wrote: “All measures are based on handling individual cases correctly and informing the outside world objectively, so that incorrect scenarios are not made by ignorant agencies, regional authorities, or political decisions.”
In an interview with the Aftonbladet newspaper, Alexandra Nordlander, the Civil Contingencies Agency's head of operational analysis, said that she and her colleagues had interpreted the answer as a criticism of their daring to present a scenario.
“We understood that this was directed to us, but we didn't share that picture [of what we were doing],” she said. “Our role is to suggest scenarios which might happen in order to shake up various actors, so that they prepare themselves before a crisis. We could have gone further, but this was a reasonable level.” One of the many joint press conferences held during the coronavirus pandemic. Photo: Fredrik Sandberg/TT
Contacted by Aftonbladet, Sweden's state epidemiologist Anders Tegnell denied that the answer had been intended as a rebuke to the Civil Contingencies Agency, explaining that it was warning of a generalised risk that other agencies in society would start to make independent epidemiological judgements.
“In this context, there were many assessments of how this would affect us. It was important to point out that it should be us who primarily assesses the spread of disease and infection – otherwise there is a risk of spreading public fear,” he told the newspaper.
“The reason was that we saw that many different scenarios were being spread by the big actors. It was important that it should be us, as the expert agency, who should be producing them.”
“This was not directed at MSB. We just wanted to stress the importance of each of us sticking to our expert area.”
Norlander also told the newspaper that the Public Health Agency's failure to provide detailed answers, which she said most of the agencies that replied to the survey had done, had complicated their efforts.
To the question: “What potential consequences do you see from the scenario within your agency's area in the short term,” the Public Health Agency answered “no special consequences”.
“The Public Health Agency is used to handling [disease] outbreaks and leading the country's infection protection, even with many infected in Sweden.”
When asked for the long-term consequences, the agency also said it did not expect any problems.
“The Public Health Agency's crisis organisation is sustainable for the long term because we have a great capacity to draw on even in normal times,” it wrote, linking to the assessment of the World Health Organisation.
When asked, 'what risks do you see regarding the supply of critical goods or services within your area of ​​activity', the agency's answer was even briefer.
“None,” it wrote, in the boxes for both 'short-term' and 'long-term', with no further explanation.
“Their answer made it more difficult for us,” Norlander said. “We understand that it was a very busy situation, but of course it's a problem when we receive that type of insufficient answer. We need to get in answers so that we can get the confidence to give a true and correct description of the situation to the government offices.”
Tegnell told Aftonbladet that the answers had been brief partly because the agency had in fact been well prepared for an increased spread of the disease, and partly due to a simple lack of time.