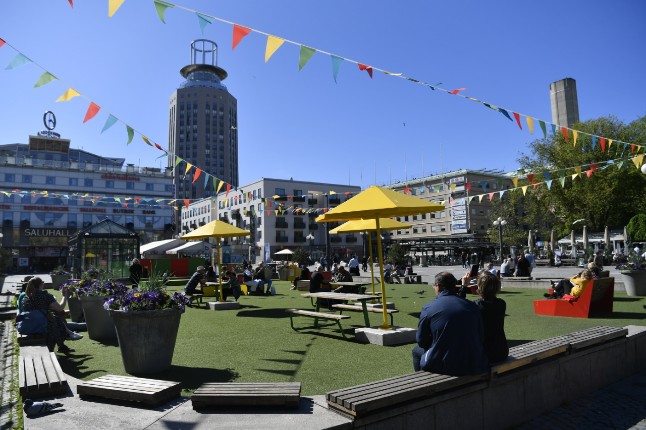 Stockholmers social distancing in Medborgarplatsen on the first weekend after the recommendations came in. Photo: Henrik Montgomery/TT
Romain Rumpler, a researcher at the Centre for ECO2 Vehicle Design at the KTH Royal Institute of Technology, set up two decibel meters around the busy Medborgarplatsen square in Stockholm in 2019 for a project on the noise made by night-time deliveries.
But after Sweden and other countries brought in their different recommendations to control the coronavirus pandemic in early spring, he and his colleagues realised that the data they had collected graphically illustrated the extent to which Stockholmers had complied with coronavirus recommendations.
“What surprised us was the very clear correlation between the recommendations from the authorities and the noise in the very week when most recommendations were issued,” Rumpler told The Local.
“It was a very clear impact, and what was also surprising was that it started with the weekend noise – so it was not only businesses that adapted, but ordinary people also responded and lowered their activity very quickly.” Graphics: Siddharth Venkataraman
In weekend of March 14th, just after the Public Health Agency of Sweden limited maximum gatherings to 500 and told people to stay home if they were sick, the average noise in Medborgarplatsen fell by 2.5dB, compared to a long-term noise reference level calculated from the 2019 data.
READ ALSO:
When, the following week, the agency recommended that those who could should work from home and brought in remote teaching for universities and upper secondary schools, average noise was down nearly 2.3dB, compared to the 2019 reference.
The following week, when the agency made bars and restaurants table service only and limited gatherings to 50, weekend noise was down by close to 3dB.
By mid-April, the seven-day rolling average was close to 3dB lower – as low as it had been during the previous Christmas when many residents desert central Stockholm and commercial traffic halts almost completely. Graphics: Siddharth Venkataraman
Unlike most countries in Europe, Sweden has relied mainly on voluntary recommendations rather than a lockdown throughout the pandemic – although social distancing rules for bars and restaurants were brought in – a strategy that became controversial after the country reported many more deaths than its Nordic neighbours.
Compliance has not been flawless, with authorities closing several bars in the capital for not following social distancing rules, and reports of overcrowding on some public transport. But the story is more complex than that.
Rumpler, who is from France, said he and his co-writer Siddharth Venkataraman, from India, had become curious after the approach came under criticism internationally, and had wanted to test their private suspicions that people in Stockholm were following the recommendations to at least a greater extent than many believed.
“Family back home started to point out the peculiar Swedish approach, and we in Sweden became curious because we know there is a bit more compliance with recommendations,” he said.
In the article, published in the journal Sustainable Cities and Societies, they conclude that their data demonstrates that many people did in fact comply.
“Contrary to what has been recently discussed in public media… the recommendations, and the restrictions imposed during the ongoing pandemic clearly have had a significant effect on the transport and other human-related activities in Stockholm,” they conclude.
“In this unique investigation, the use of distributed acoustic sensors has thus shown to be a viable solution not only to enforce regulations but also to monitor the effectiveness of their implementation.”