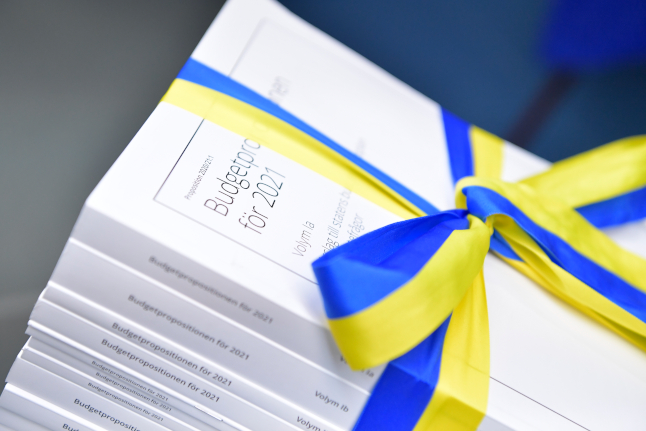 Finance Minister Magdalena Andersson has previously described the budget as “historic in its scope” and it contains investments worth 105 billion kronor ($12 billion), designed to pull Sweden out of an economic crisis sparked by the coronavirus pandemic.

Four parties have been involved in working out the budget proposal: the ruling centre-left Social Democrat-Green coalition and the centre-right Liberal and Centre parties.

Even before the pandemic, these parties had already agreed on a series of future measures set out in the so-called January Agreement in 2019. This enabled the Social Democrats and Greens to take office with the support of the latter two, and means the budget bill contains a range of proposals from each party.

For example, it means tax cuts on income are proposed in the budget, which the centre-liberal wing of the collaboration argues will stimulate the economy and help boost jobs in the wake of the pandemic.

And it also means investment in traditional welfare measures, such as education, elderly care and healthcare – some of the Social Democrats' favoured issues, and which include areas left bleeding by the coronavirus crisis – and billions allocated to measures for the climate, pushed through partly by the Green Party. Here are some of the measures proposed in the bill:

A proposal to cut taxes on labour, pension and social benefits means that around 7.2 million people are expected to get a tax cut of up to 1,500 kronor next year, set to increase the following two years.

The tax cuts will be progressive and will start applying to people earning at least 40,000 kronor a year. People with an annual income of at least 240,000 kronor will be eligible for the full 1,500 kronor tax cut.

Sweden's unemployment rate is expected to rise from 9.0 percent this year to 9.5 percent next year, according to the government's predictions, a result of thousands of people being laid off during the coronavirus crisis.

Many have already found new jobs, but the situation is still critical, and any financial crisis tends to hit long-term unemployed, especially foreign-born, the hardest.

Some of the new measures include lowering employers' social security contributions for young people (7.52 billion kronor in 2021, followed by 8.95 billion in 2022 and 1.43 billion in 2023), a 5.50 billion tax reduction to promote investment, and 1 billion kronor to Sweden's Employment Agency (Arbetsförmedlingen) next year, to help the agency cope with an increased number of unemployed people.

Many of Sweden's international residents run their own businesses or work as freelancers, sectors heavily affected by the pandemic. The budget proposes making it easier for one-person businesses to hire a second employee by temporarily reducing employers' social security contributions for two-person businesses.

According to Andersson, the budget investments will create 75,000 new jobs.

She told a press conference on September 21st that the main aim of the budget was to boost the labour market: “Jobs, jobs and jobs, in order to have the resources needed to get to grips with our societal problems.”

Another new measure announced today is keeping the new cap on unemployment insurance (a-kassa), which was raised to 510 or 1,200 kronor a day back in spring, in place for another two years. Just like in other countries, the Swedish healthcare sector was hit hard by the coronavirus pandemic, and the time has now come to start paying back the huge healthcare backlog created by cancelled surgeries as well as hospitals' work back in spring to increase hospital beds during the pandemic.

The pandemic has also exposed flaws in the Swedish welfare state. The virus swept through elderly care homes and immigrant communities in socio-economically vulnerable areas of Stockholm at an alarmingly fast pace in April, and it is clear that more must be done to bridge inequalities in the Swedish healthcare sector.

The budget bill contains 4 billion kronor a year earmarked for postponed treatments as well as Covid-related care over the next two years, and 2 billion that will be allocated to continued testing and contact tracing.

It also contains general government grants to Sweden's 290 municipalities (which are responsible for several areas of the welfare state in Sweden, including elderly care and schools) and 21 regions (responsible for healthcare) to the tune of 10 billion in 2021 and 5 billion in 2022.

The government's budget proposal also earmarks a permanent annual investment of four billion kronor to boosting elderly care, as well as an additional 1.7 billion kronor which will be added on top of a previously advertised package designed to drive new and skilled staff to elderly care.

What's the state of Sweden's economy?

Sweden's GDP took a historic tumble this year, falling by 8.3 percent in the second quarter compared to the first quarter (7.7 percent year-on-year when adjusted for seasonal effects) – an even bigger single-quarter drop than during Sweden's financial crisis in the 1990s and the global financial crisis in 2008.

The government predicts that GDP will in total fall 4.6 percent this year, and then climb 4.1 percent next year.

The country's economy was in a fairly healthy state prior to the pandemic, and it is already showing signs of recovery. Financially, Sweden has weathered the pandemic better than many countries, which may also be partly to due with the fact that some of the industries hit the hardest in almost any country including Sweden – hotels and restaurants – are comparatively less crucial to the Swedish economy than to, say, Italy or Spain.

But even without a coronavirus hard lockdown, Sweden is still going through one of its worst economic crises in decades, with high unemployment, and the state will have to borrow for some of the budget investments.

Some of the measures in the bill are temporary and will be removed in one or two years, others are permanent.

As we explained above, the budget is a collaboration between the ruling Social Democrat-Green coalition and the Centre and Liberal parties, so it has a parliamentary majority.

Opposition politicians argued that by trying to please everyone, it was a mish-mash of ideas without a plan.

“The aim of the budget is to make four parties more or less content, so that they can keep governing,” the TT news agency quoted the Sweden Democrats' economy spokesperson Oscar Sjöstedt as saying.

His Christian Democrat counterpart Jakob Forsssmed compared it to going to the supermarket without a shopping list: you throw a bunch of groceries into the cart, swipe your credit card, then get home and wonder what you're going to do with everything you bought.

The Moderate Party said the budget created too many debts without solving problems and called for more investments in unemployment and crime-fighting measures. The Left Party on the other hand said the budget did not go far enough in bridging the gap between rich and poor.

Economists both praised and criticised the budget proposal.

Robert Bergqvist, chief economist at banking giant SEB, said the investments were needed to help Sweden’s recovery on its way. But his counterpart Annika Winsth at Nordea criticised using “enormous sums” of money to jump-start an economy that is already showing signs of bouncing back, adding that she would have liked to see more packages targeted at businesses rather than consumers, to help create more jobs.

We have tried to explain the key points that may be relevant to The Local's members above, but this is not an exhaustive guide to the 2021 budget bill. Read more about Sweden's budget here, and if you have questions, you can always email our editorial team at [email protected]. We may not be able to answer every single question, but we read all emails and they help us with our editorial coverage.