Daniel Nyqvist who has been convicted of double murder in Linköping 2004. Photo: Polisen/TT

Daniel Nyqvist confessed killing an eight-year-old boy and a 56-year old woman shortly after his arrest in June.

Nyqvist, who was found to have “committed the acts under the influence of a severe psychological disorder” was sentenced to psychiatric care.

The two victims, unrelated to each other, were stabbed one morning in the quiet town of Linköping.

Investigators struggled to come up with either a suspect or a motive, despite finding the suspect's DNA at the scene, the murder weapon, a bloody cap and witness descriptions of a young man with blond hair.

Police even called upon the FBI for help, but to no avail. Over the years, the case file grew to become the second biggest in Sweden's history, after that of the 1986 murder of Prime Minister Olof Palme.

The case was finally cracked when new legislation in January 2019 allowed police to search for DNA matches of not only the perpetrator but also family members.

After exhausting the police's own DNA database they started looking on commercial genealogy websites, which are popular among Swedes seeking long-lost relatives.

“We received a match almost immediately. And several months later, the suspect was arrested. His DNA was taken and matched 100 percent,” police said in a statement the day after his arrest.

Aged 21 at the time of the murders, Nyqvist has spoken about having obsessive thoughts about killing and said that he chose his victims randomly.

The young boy was selected as Nyqvist saw him as an easy target and after stabbing the child he went after the woman, who had been passing and had witnessed the attack.

An unemployed loner who liked to play computer games, Nyqvist seldom ventured out of his parents' house, where he was living at the time of the murders.

According to investigators, he continued to live a secluded life near Linköping since the killings.

“This is my son, Marley, when he was 19 years old”, Maritha Ogilvie tells AFP, holding a framed photo of a smiling young man, one of many that adorn the walls of her Stockholm apartment.

“He was shot in the head sitting in a car with a friend”, says the 51-year-old. The killing, on March 24, 2015 in Vårby gård, a disadvantaged concrete
suburb southwest of Stockholm, has never been resolved and the case was closed 10 months later.

Murders like these are usually settlings of scores between rival gangs often controlled by immigrant clans, according to police, and are increasingly taking place in public places in broad daylight.

The violence is primarily attributed to battles over the drug and weapons market and personal vendettas.

It has escalated to the point where Sweden — one of the richest and most egalitarian countries in the world — now tops the European rankings for fatal
shootings.

According to a report published last year by the National Council for Crime Prevention, among 22 countries with comparable data, only Croatia had more
deadly shootings, and no other country posted a bigger increase than Sweden in the past decade.

Despite various measures introduced by the Social Democratic government to crack down on the gangs — including tougher prison sentences and boosting police resources — the number of dead and injured continues to mount.

Since January 1, 48 people have been killed by firearms in Sweden, three more than in all of 2021. There are also frequent bombings of homes and cars and grenade attacks.

For the first time, crime has dislodged the usual welfare state issues of health care and education and is one of Swedes’ main concerns in Sunday’s election.

While the violence was once contained to locations frequented by criminals, it has now spread to public spaces, sparking concern among ordinary Swedes in a country long known as safe and peaceful. On August 19, a 31-year-old man identified as a gang leader in Sweden’s third biggest city Malmö was gunned down in the Emporia shopping centre, several months after the death of his brother.

A 15-year-old was arrested for the murder.

A week later, a young woman and her son were wounded by stray bullets as they played in a park in Eskilstuna, a quiet town of 67,000 people west of
Stockholm.

The right-wing opposition, led by the conservative Moderates and the far-right Sweden Democrats who hope to wrest power from the Social Democrats,
have vowed to restore “law and order”. Defending the left from allegations of laxism, Prime Minister Magdalena Andersson has promised a “national offensive” against the scourge which poses “a threat to all of Sweden”.

According to Andersson, the escalating crime numbers are due to the emergence of “parallel societies” following “too much immigration and too little integration”.

Jacob Fraiman, an ex-gangster who now helps other criminals leave that life behind, says even he is shocked by the level of violence.

“I’m from another generation, obviously we had weapons too. But it wasn’t often you had to shoot someone”, he tells AFP in Södertälje, an industrial town south of Stockholm with a large immigrant population. “You used to shoot someone in the legs. Now, they’re told to shoot in the head”, he says.

At the police station in Rinkeby, one of Stockholm’s disadvantaged suburbs, 26-year-old patrol cop Michael Cojocaru says he and his colleagues regularly encounter brutal violence reminiscent of war and seize assault weapons, grenades and explosives.

“You’ll see wounds, people who’ve been shot with AK47s, who’ve been stabbed, people who have war wounds”, he tells AFP. “It’s like a totally different society … another type of Sweden”.

Experts attribute the escalating violence to a series of factors, including segregation, integration and economic difficulties for immigrants, and a large
black market for weapons.

The recruitment of young teens into criminal gangs — who aren’t tried as adults if they get caught — is also a major concern.

Seven years later, Maritha Ogilvie is still trying to understand why her son was killed. “He was just a normal kid”.

“I don’t know what happened with our society. I don’t know how they lost control over certain areas, but they did”, she sighs. “And it keeps on getting
worse”.

CRIME
Man killed in shooting in Swedish city of Helsingborg 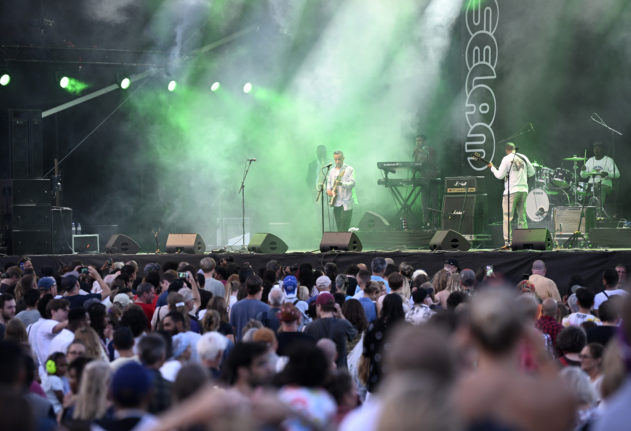