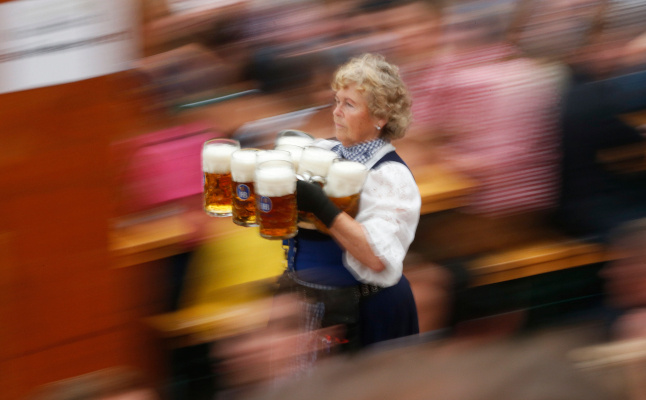 A photo from the real Oktoberfest held in Munich. Photo: Matthias Schrader/AP/TT
“It's a boring but rational decision to take,” Marcus Hellgren, the organiser, told state broadcaster SVT.
Hellgren runs Stockholm Nation, one of the university's main 'nations' – the fraternities or social clubs around which student social life is based in Sweden.
He said the decision to cancel the 400 person party had come after discussions between the nation's board, university authorities, and local health authorities, who had expressed concern that the party risked being a super-spreading event.
Hellgren maintained that according to Swedish regulations, there had been no obstacle.
“We are still running an operation, which according to the municipality and the police, is within the boundaries of what you can do,” he said. “But with the situation as it is now, with the spread as it is now, we chose to respect the doctors' advice.”
The decision came after Sweden's university minister Matilda Ernkrans called on the country's students to “get a grip“, after more than 200 people caught coronavirus at university parties.
On Saturday, she was she was pleased with the decision of Stockholm Nation.
“This shows that students understand the seriousness of the situation and are taking responsibility, exactly as I expected,” she said.
“The pandemic isn't over. Now what's required is to 'carry on and persevere', she said. “I trust students to continue to take responsibility to reduce the spread of infection, both for their own and others' education.”
Hellgren had on Friday been resisting pressure to cancel.
“It's very difficult because those attending have booked in advance. They are going to be sitting at tables with distance between them,” he told SVT.