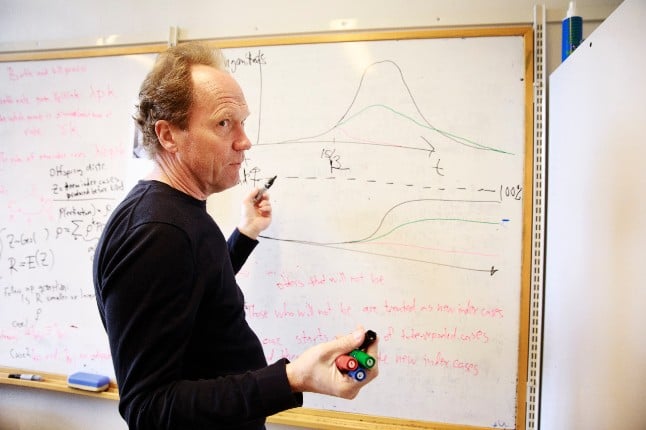 The mathematician Tom Britton expects either 1,000 or "a few hundred" deaths, depending on the population. Photo: Emma-Sofia Olsson/SvD/TT
In an interview with state broadcaster SVT, Tom Britton, a maths professor at Stockholm University, said that if the population begins to relax, it would lead to a sharp rise in the number of deaths, but not a repeat of the rates seen in April.
“If we were to drop the restrictions now and start to live how we did before the pandemic, then I think we could get as many as a thousand more [dead by the end of the year],” he said.
“It can absolutely not be at the same level as in the spring when no one had any immunity, but the risk for a great number of new deaths is still significant if we aren't careful.”
Britton said he was himself optimistic that the population in Sweden would stick to the recommendations, keep the death rate at around the current level of two to three deaths a day, limiting further deaths this year to “a few hundred”.
He said it would nonetheless be a challenge to keep up the same levels of hygiene and social distancing seen in April and May.
“It's human nature. You just quite simply can't bear it, and when the situation improves as significantly as it did in the summer, there's probably an excuse for taking all the behavioural rules a little easier,” he said.
“I'm hopeful. There's probably a bit of self-regulation involved, that when we know that infection rate is rising, we will then become more careful and listen more to the recommendations of the Public Health Agency.”
According to the Public Health Agency of Sweden, 5,894 people have died with coronavirus so far.