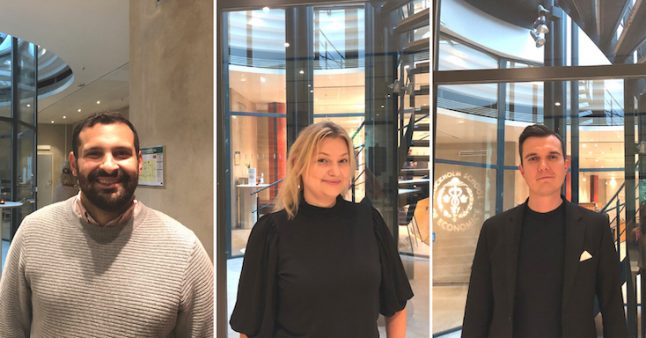 In the final article in our #MyMBADiary series, The Local catches up with six students who have just completed the 18-month Executive MBA program at the Stockholm School of Economics (SSE). We find out about the doubts, the rewards and the life-long connections formed through learning together.

Apply now: the next admission round for the SSE Executive MBA closes on November 1st

Asked about the most surprising thing he learned or experienced during the program, Pavel Tatyanin says he could never have imagined how much “the world and myself would change”. As the world has been turned upside down by coronavirus, his work in eCommerce has become more relevant than ever. And what he learned during the MBA helped him understand how companies need to transform.

“My experiences studying and networking at SSE have helped make me a stronger and more knowledgeable leader,” he says. “That’s helped me convert the current crisis situation into new business opportunities.”

Both Juan Colmenares and Carissma Dennis said they were pleasantly surprised at how much they learned about themselves through the program. “Knowing your strengths and weaknesses allows you to become a humbler and more curious version of yourself,” says Juan. “You also develop an intrinsic habit of asking why and why not, as well as seeing things from different perspectives.”

Carissma grew up in India, where she says MBAs are seen as hugely important in advancing your career. “I came in with the mindset that what I’d learn would be primarily academic,” she says. “But I soon realised how much impact the learning process has in teaching you about yourself and shaping you as an individual.” This provides a great basis, along with the strategic skills you learn, to develop as a leader, she says.

Many graduates of the program emphasise the networking benefits – which include deep, meaningful connections and friendships. “We all have busy lives but the shared experience brought us together,” says Mary Fisher, director of a non-profit arts organisation in New York. “Everyone genuinely wanted to help each other to be successful and I’m sure I’ve made a few life-long connections.” Students on the Executive MBA program are highly diverse. Those on the latest intake are aged from 29 to 50, 40 percent are women and 42 percent come from outside Sweden. The program also helps you to understand diverse ways of thinking, according to the new graduates.

The diversity of his fellow students – in their personal and professional backgrounds – “really broadened my perspective on life and work”, says Jarich Nooitgedagt, originally from Amsterdam. “The different perspectives teach you that there are multiple ways to solve an issue,” he says. “Through group discussions, you become aware of the opportunities each different approach can offer.”

Carissma said she learned from observing her fellow students, as well as from the program itself. “I met so many inspiring, smart, strong women and worked closely with some very experienced people,” she says. “When I doubt myself, I think of these people and what they would do and I gain strength from that.”

Russian-born Pavel also talks about feeling inspired by the variety of people he met and their “exciting” lives and careers, which ranged from investment banking to medicine to engineering. “This was a life changing experience, which will influence my career choices and development in the future,” he says.

But can being surrounded by so many high achievers feel daunting? Not at SSE, says Juan. “I was really surprised by everyone’s openness,” he says. “I was expecting hard competition and maybe rivalries. But what we actually had was positive peer pressure that helps you believe you can become more than you are.”

The students who have just completed the program understand why people sometimes hesitate before applying. But they also know how all the hard work pays off.

“It has been a very intensive time with many ups and downs, but if I could turn back time I would not hesitate to do it all over again,” says Kristina Zaytseva, originally from Moscow. “You must invest in the program for sure, but the more you invest the more you’ll get out of it.”

Pavel also thinks of the Executive MBA as an investment – one that yields rare rewards. “Don’t miss this opportunity to invest your time and money in building a better and more knowledgeable version of yourself,” he says. You may have to put some other plans on hold. But by the end of it you’ll have the skills, knowledge and confidence to deal with whatever challenges you face, he says. Jarich says planning and preparation is vital. He advises anyone ready to take on an MBA to talk to family, friends, colleagues and customers about it well before starting. “Grab this opportunity with both hands and enjoy it to the max!” he says. “The whole MBA journey is so much more rewarding if you can dedicate sufficient time to it.”

SSE is one of Europe’s leading business schools with a rich history. It first opened its doors to students in 1909 as rapid industrial expansion in Sweden created a new demand for trained managers and workers. Carissma says this history makes her proud to have studied at the school. She also praises the faculty. “All the professors were amazing,” she says. “You also get such a great flavour of Swedish education but in a very international context.”

“The staff and instructors are invested in the students’ growth and in creating a feeling of home away from home,” adds Mary, who also praises SSE’s “incredibly helpful” alumni. She also believes the mix of self study and classes with international students gives you “the best of both worlds”.

According to the latest FT rankings of Executive MBA programs, alumni of SSE have had an average salary increase of 46 percent after doing the program. A pretty good motivating factor, no doubt.

Juan reflects that his initial hopes were all about gaining business knowledge so as to gain “more influence and ultimately more money”. “After completing the program, the MBA has given me so much more than that including a network of people, relationships and friends with no quantifiable value,” he says. “That’s what I think makes it special.”

Do you have the passion for a life-changing challenge that can boost your earnings, skills and network? Click here to find out more about the SSE Executive MBA in Stockholm.