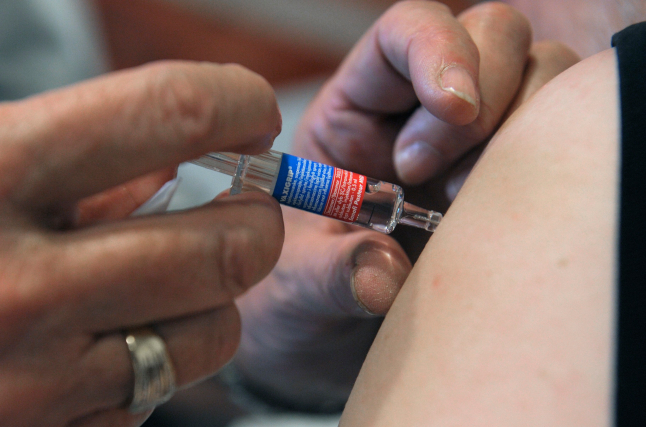 A man getting a seasonal influenza shot in Sweden. Photo: Fredrik Sandberg/TT

People aged over 70, other risk groups and people working in health and social care will be prioritised, said Stockholm regional healthcare councillor Ella Bohlin on Thursday.

That group includes an estimated 700,000 people in the Swedish capital region.

“After that group, other people aged over 18 who are not considered to be risk groups will be prioritised, and those who are slightly older will come first,” newswire TT cited Bohlin as telling a press conference on Thursday.

Children under the age of 18 will be the third and final group to get vaccinated.

“The Public Health Agency has jugded that children are at much lower risk of falling ill, and that's why they don't need to be vaccinated during the first phase,” said Bohlin. Stockholm health authorities expect to be able to start mass vaccinations at the start or middle of next year, but it all depends on when a safe and effective vaccine becomes available in Sweden.

Sweden has so far signed a deal with Astra Zeneca that secures access to at least six million doses of vaccine, of which 1.4 million would be given to Stockholm just based on population. However, Stockholm is expected to need up to 3.7 million in total, and negotiations to secure more doses are still ongoing.

Bohlin said she was not worried that there would be a shortage of vaccine.

“We have a very good dialogue with several pharmaceutical companies. My hope is that we get access to the 3.7 million doses we need.”

Swedish healthcare is run by the country's 21 regions, but Stockholm's plan is similar to the general road map staked out by the national Public Health Agency.

Public Health Agency director-general Johan Carlson told a press conference in August that “those who will be prioritised are people aged over 70 and others with underlying symptoms. Staff in the medical and care sector will also be included.”

“Out assessment is that children do not need the vaccine in the first instance – that goes for healthy children without underlying illnesses. Quite simply, it's about creating protection around the people who have extra need of protection,” added Carlson at the time.

Sweden's vaccine coordinator Richard Bergström has said that he expects Sweden to have as many as 18 million doses of coronavirus vaccine next year, as long as they work and are safe.