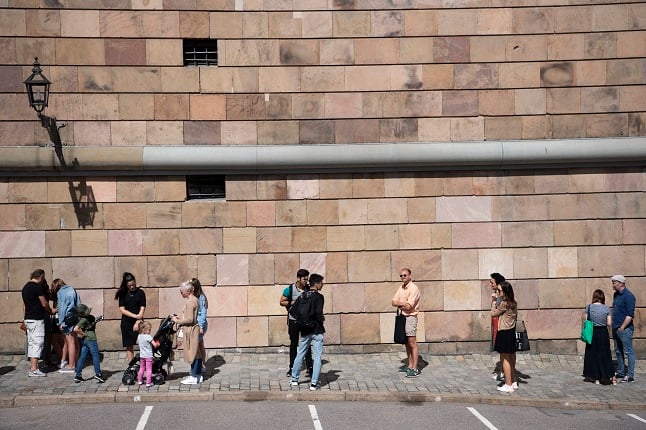 What is a second wave?

Scientists, governments and the media have used the term “second wave” to refer to a resurgence in coronavirus cases following an initial peak and fall.

There is no fixed definition of what constitutes a 'second wave' in epidemiology; no threshold which new daily cases or infection rate must pass. This can make it complicated when experts across Europe and even within the same country use the term in different contexts.

A spokesperson from the European Centre for Disease Control (ECDC) told The Local there is no formal definition of the term, and that it is mostly used for influenza. One reason it has been a much-discussed concept is that during the deadly 1918 flu pandemic, the virus mutated between waves and became more dangerous, meaning many more people died in the second wave.

“In actuality, we don't even use this concept [of waves],” the ECDC spokesperson said. “This is something that circulates in the media a lot. What we refer to in the current circumstances is a resurgence of COVID-19 cases.”

Sweden's state epidemiologist Anders Tegnell said on Thursday that Sweden is not experiencing a second wave.

However, Tegnell also said that other countries were clearly experiencing second waves, including France, Spain, and the Netherlands. He has previously cited Italy as a country in a second wave, prompting Italy's ambassador in Stockholm to respond pointing out that Italy's weekly rate of new cases per capita was lower than Sweden's.

So what's the difference?

Using the definition of a second wave as a rise in cases after a period of falling numbers, then it is clear that Sweden is in fact experiencing a second wave, along with many other European countries.

Meanwhile, the US may not see a second wave at all, with many experts saying it remains in its first wave, having not seen a significant fall in cases. And some European countries that had largely managed to keep the virus under control, such as Poland and the Czech Republic, are seeing large rises in cases having never really experienced a first wave.

The chart below shows how Sweden's daily new cases per capita compare with those in Denmark, France, Germany, Italy and Spain. All six countries have seen a rise in new cases after a period of lower numbers, but in France and Spain the rise has been particularly pronounced, reaching record daily numbers.

It is hard to draw a direct comparison due to different testing rates and criteria in each country. Sweden was late to catch up to most European countries when it comes to testing, which makes it likely that more cases went undetected in the earlier months of the pandemic than elsewhere.

Even with increased testing in recent months, daily new cases have not yet reached the level they were at during Sweden's peak, whereas in both France and Spain those numbers have been surpassed. But it's also important to remember that Sweden's peak came several months later than in the other five countries on this graph.

A rise in cases in the autumn was expected, not only because viruses of this kind tend to do better in colder environments, but also for other reasons such as people returning to workplaces in larger numbers, socialising indoors rather than outdoors, or growing tired of guidelines.

However, when it comes to the number of daily reported deaths, there has not yet been a second uptick in Sweden, although the number of people receiving intensive care treatment for the virus is rising steadily.

The graph below shows how the daily deaths linked to Covid-19 has remained low in Sweden, Germany, Denmark and Italy but risen in recent weeks in France, the Netherlands and Spain – even if the numbers in those countries are still a long way from the levels during the peak of the first wave.

In Sweden, the new cases are disproportionately being uncovered in specific parts of the country. Tegnell has said Sweden is seeing localised or cluster outbreaks, rather than a second wave.

On Thursday, a TV4 reporter asked why he defined the rise in cases in some countries as a second wave but not in Sweden. He responded: “There is a very comprehensive spread of infection in large parts of the society, which we don't see in Sweden but which we are seeing in, among other places, France and Spain.”

In the week ending October 11th, 35 percent of all positive test results came from Stockholm, 13 percent from Västra Götaland and 9 percent from Skåne.

The map below, from the ECDC, uses data from a 14-day period to show new cases per capita across Europe, including Sweden. In Sweden, the rate of new cases is relatively high across the whole country, while in Germany and Norway the rate is low in most areas, with some 'hotspots' in Germany. In France, Spain, and countries like the UK meanwhile, there is a very high rate of new infections. Whether or not you choose to talk in terms of outbreaks or waves, it is clear that Sweden is seeing a sustained rise in coronavirus cases across almost the entire country, and will need to introduce and follow appropriate measures throughout the autumn.