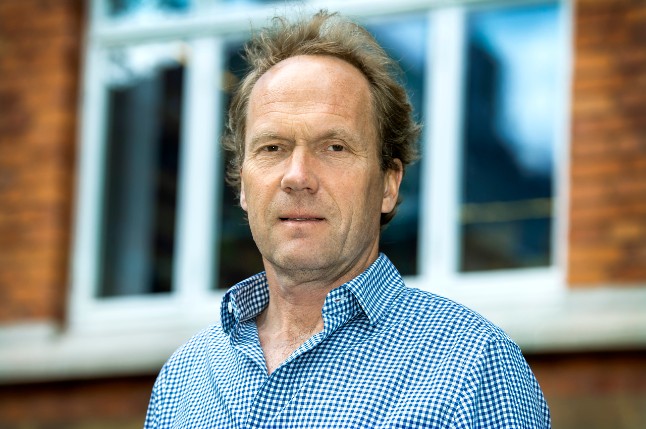 Tom Britton is a professor of mathematics at Stockholm University. Photo: Claudio Bresciani/TT
Tom Britton, maths professor at Stockholm University, made waves in April when he predicted on Swedish national television that up to 20,000 people in Sweden might ultimately die from the virus.
He told The Local that he was now convinced that greater restrictions would have saved lives, at least in the short term, if they had been imposed in mid-March.
“I think that if we had done a more serious lockdown, we would have saved more lives, but we would still probably have had maybe 1,000 or even 2,000 dead people,” he said. “I don't think we could have reached the low numbers of Denmark and, in particular, Norway.”
Sweden's death toll from the virus currently stands at 5,918.
Britton said he believed that the Public Health Agency had decided not to impose a strict lockdown because by the time it had become apparent what was happening, the disease was already too widespread in the country, and particularly in the capital, to stop it, with large numbers returning infected from Stockholm's winter sports holiday in February.
“They probably realised, 'if we want to completely stop this now, there would have to be a sort of tremendous lockdown'. And I think that they probably thought that this would be impossible to do.  We would have had to close everything.”
Even with a lockdown, he said, Sweden could not have achieved as few deaths as in Norway, where only 278 people have so far died of the virus, or in Denmark, where 686 people have.
READ ALSO: Maths expert warns of 1,000 more Covid deaths if Sweden drops restrictions
However, in The risk for a new COVID-19 wave — and how it depends on $R_0$, the current immunity level and current restrictions, a new preprint study published last week on the Medrxiv preprint server, Britton argues that the greater number of infections Stockholm experienced in the spring meant that it may now require less stringent restrictions than Oslo and Copenhagen to prevent a resurgence in infections.
Based on the number of deaths in Stockholm and an estimated fatality rate of 0.5 percent, Britton estimates that the level of immunity in Stockholm is currently around 20.4 percent, compared to just 4 percent in Copenhagen and 2.3 percent in Oslo.
“We suffered quite a lot during the spring, and, given this, herd immunity is a little bit on our on our side, but there is still a substantial risk for future outbreaks in Sweden.”
Britton calculates that the cluster-like spread of coronavirus means that herd immunity — meaning that enough of the population is protected against the virus due to a vaccine or previous infection — can be achieved when as few as 40 percent to 45 percent of the population have been infected, meaning even Stockholm still has some way to go. However, scientists still don't know what level of immunity is provided by infection, or for how long.
In Britton's study, he and his co-authors argue that Stockholm's greater size and other factors meant that its basic reproduction number (R0) was higher than that of Copenhagen and Oslo.
This meant that at the start of the pandemic each infected person in Stockholm reinfected about 3.9 others, compared to 3.5  others in Copenhagen and 3.0 others in Oslo.
As a result, even with its much greater immunity levels, Stockholm will need to impose only slightly less stringent measures, with a minimal preventive level of 59.7, compared to 69.0 in Copenhagen and 65.1 in Oslo. A screen grab from Britton's study showing the impact of immunity on various cities
Britton told The Local that Stockholm's greater initial susceptibility might also explain why even after the high level of infections of April, May and June, the city was currently seeing a more severe resurgence in cases than Malmö and Gothenburg.
“Stockholm is clearly a bigger, urban city than Malmö and Gothenburg, so maybe that difference outweighs the immunity that has been achieved,” he said. “So it could be that Stockholm is still the region which has the highest risk of a big second wave.”
Right now, he warned, Sweden was at a point where it needed to take action quite urgently to avoid seeing a resurgence in cases  which would lead to deaths in the coming months.
“If we follow the recommendations and restrictions, I think very few will die, it could be a hundred or something. Whereas if we, neglect all recommendations or restrictions, it could be of the order of a thousand instead. I think we could see a big second wave, not as big as in the spring, but still a big one.”