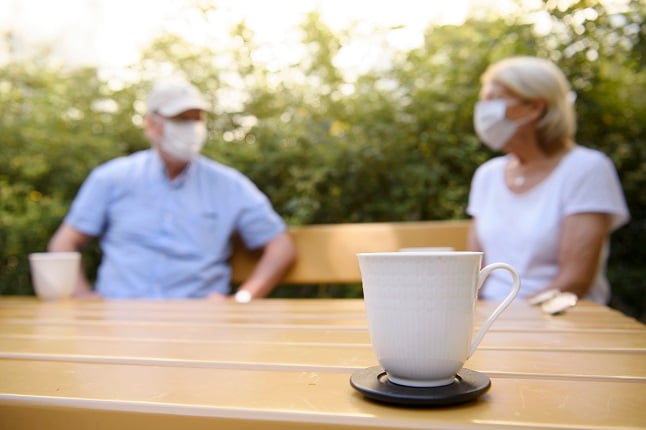 Since March, people in risk groups had been urged to limit all close contacts outside their household. File photo: Henrik Montgomery/TT

From March, people aged over 70 or in risk groups have been advised to avoid all close contact with people outside their households, including avoiding going to shops, supermarkets, and other places with large numbers of people.

This means over-70s are no longer advised against going to shops or having close contact with others, but all age groups are still required to keep a distance from other people in public places, avoiding large gatherings, and staying at home when showing any symptoms.

At a press conference, Sweden's state epidemiologist rejected the charge that Sweden was removing restrictions just as the number of infections was rising.
“I don’t think you can see it as a relaxation of restrictions,” he said. “We’ve made it a little easier for a group in society to live a slightly more normal life when they’ve been isolated in such a way that they’ve felt pretty terrible, a lot of them.
“It’s a group which isn’t particularly important for the spread of the infection in Sweden. They’re important because they can get seriously ill, but it’s not them driving the pandemic.”
He warned elderly people, however, not to take the change as a signal that they no longer had to be careful.
“It’s very important that people in that group don’t take too big a step, and begin taking big risks,” he said. “We’re very clear that if you are 70 or older, that the risk is significantly higher that you will become seriously ill, and that’s something you should be aware of.”
Announcing the change in recommendations on Thursday morning, Sweden's health and social affairs minister Lena Hallengren, said that the elderly had suffered as a result of their isolation.
“This group has made big sacrifices in order to protect themselves and to reduce the spread of infection,” she said.
Public Health Agency head Johan Carlson said that the additional measures for over-70s had had an effect, but that it was not justifiable to keep them in place with evidence that mental and physical health had suffered from isolation.

He stressed the importance of all age groups continuing to follow the existing measures in order to protect the most vulnerable groups long-term.

“The group has taken the recommendations from spring seriously, the result is that the rate of illness has reduced and fewer have been admitted to intensive care. A large number of lives have been saved, but it is not reasonable that a risk group should carry such a large responsibility in the long run,” said Carlson.

“It is not the case that elderly people should start taking the bus as normal. Everyone should act with great care, you shouldn't go out and crowd in shops unnecessarily, you should avoid rush hour. There will be a risk for individuals. We will see that a few people will get sick, but we have to find a balance,” he said.

The decision was made based on international research and Swedish epidemiological data, data from the 1177 healthcare service, and speaking to pensioners' and immigrants' organisations, according to the Public Health Agency.