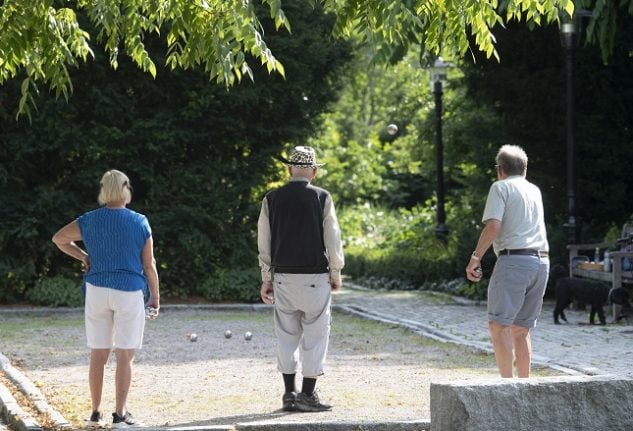 Sweden's Health Minister and the Public Health Agency announced on Thursday morning that they are scrapping the recommendations for over-70s and risk groups, those most at risk of serious illness from the coronavirus. Since April, people in this demographic have been urged to limit all close contact with people outside their household, including avoiding shops, supermarkets and public transport. From today, the same recommendations (including to keep a distance from others in public, stay home if symptomatic, and avoid large gatherings) apply to the whole population.

Stockholm public transport operator: 'We're doing all we can'

SL, the company that runs Stockholm's public transport, has responded to criticism about over-crowded buses and underground trains. The cooler autumn weather, and a rise in companies encouraging employees to return to the workplace (despite official recommendations to work from home if possible) has led to crowds on certain routes.

Speaking to Expressen, the company's press spokesperson said they had “bombarded” Stockholmers with adverts and reminders not to travel unless necessary, and added as many extra buses and departures as possible. In Sweden, there is no legal possibility for bus drivers to refuse entry to passengers if the vehicle is crowded, he said, so “it is up to the people of Stockholm themselves” to help reduce crowding, for example by travelling outside rush hour or boarding trains at the middle. Passengers waiting for the subway in Stockholm in late August. Photo: Jessica Gow/TT

The infectious disease doctor for the Skåne region on Wednesday emphasised the importance of everyone in the region continuing to follow the following rules: don't go to parties or after-work drinks, don't go into busy shops, and work from home if possible. These recommendations all form part of the national coronavirus guidance that applies to everyone in the country, but it was emphasised once again in Skåne following signs that the infection rate is rising fast in the region, and following national warnings that people are starting to tire of the rules.

Regional director Alf Jönsson said at the same press conference: “Everyone needs to be asking themselves, what can I do?”

Tourism company TUI is investing in ski holidays, with seven flights launching to the newly opened Scandinavian Mountains Airport in Dalarna, central Sweden. The routes will primarily be domestic (from Stockholm, Gothenburg, Malmö, Ängelholm, Växjö and Norrköping) with one from Copenhagen, Denmark. Flights will begin in December 2020 with the first tickets going on sale today.

“We have planes that are just standing still at the moment and cannot fly to other destinations, so we looked at which trips we can actually do. Going to the mountains is one possibility and something we hope to continue focusing on after the pandemic,” press spokesperson Adem Györki told Aftonbladet. China on Wednesday pressured Sweden to drop a new ban on Chinese tech firms Huawei and ZTE from its 5G network, warning that it would otherwise face “negative impacts”.