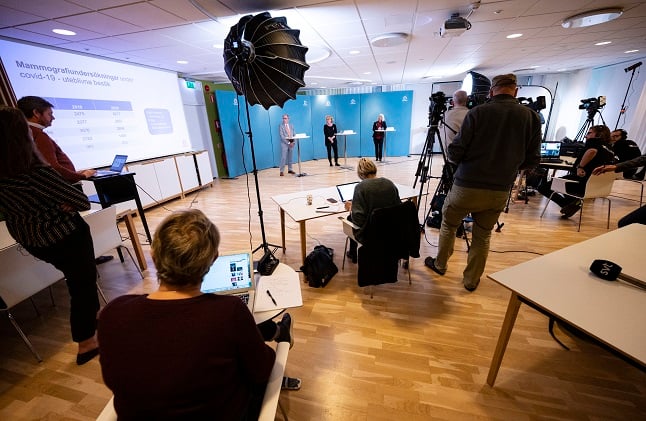 A press conference held by Region Skåne, which has said it won't raise the audience limit for public events. Photo: Johan Nilsson/TT

The Swedish government on Thursday said it would allow up to 300 people to attend certain sporting and cultural events, if designated seating was offered and a minimum one-metre distance ensured between audience members (or groups of two, who may sit together without a distance if attending together).

Sweden's 21 regions will be allowed to keep limits lower if they decide it is necessary, and Skåne is the first region to announce it will stick to the 50-person limit. “I see no reason to increase the 50 [person limit] we have in Skåne […] we will remain at that level until further notice,” the regional spokesperson told Kvällsposten. “I think it is good that the government says the decision can be made regionally, up to 300. Where the infection is low, people should be able to allow bigger audiences and where it is high, we should have a more limited audience.”

Denmark and Norway have responded to the worsening coronavirus situation in Sweden with stricter border controls. Starting from midnight on Saturday, all of Sweden will be on Norway's 'red list', along with all of Europe outside the Nordics. This means meaning that everyone travelling into the country from Sweden must quarantine for ten days, but there are a number of exemptions including if travelling for work (see more details from authorities here).

Also from Saturday, Denmark will add four new regions (Skåne, Norrbotten, Sörmland and Västra Götaland) to its red list, leaving only five Swedish regions from which travel to Denmark is allowed (Gävleborg, Kalmar, Värmland, Västerbotten and Västernorrland). Again, there are some exemptions allowing people to travel from 'closed' regions, including for work or to reunite with a Danish partner. You can read more details from Danish authorities here. Long Covid is the name that has been given to the condition of experiencing symptoms caused by coronavirus for at least eight weeks after the initial infection. As a new virus, there is still a lot scientists don't know about it, but a recent study from King's College London showed that around 5 percent of people who catch Covid-19 are sick for at least eight weeks.

This is part of the Covid Symptom Study (which has not yet been peer-reviewed). The same study showed that among those who took part in reporting their symptoms via an app, 2.5 percent of people in Sweden who caught Covid-19 still had symptoms after eight weeks. If that figure is accurate, based on available Public Health Agency data it would mean there are roughly 25,000 long Covid sufferers across Sweden, reports SVT.

Covid-19 patients with dementia should be isolated at care homes, the Public Health Agency has recommended. Care homes have reported of difficulties in ensuring social distancing among residents with dementia, and currently there is no legal possibility to forcibly isolate or quarantine them, other than at regional-run medical facilities such at hospitals (where it is possible to enforce quarantine under Sweden's Communicable Diseases Act).

The Public Health Agency has recommended a change to this rule, as well as recommending that municipalities (which run care homes) should be allowed to hire doctors, which is currently done at the regional level. Both recommendations will now be looked at by the government.