Standing at 140 metres long, 45 metres wide and weighing 3,700 tonnes, the bridge connects the island of Södermalm and the Old Town in Stockholm.

It was officially inaugurated on Sunday by King Carl XVI Gustaf. Due to the coronavirus pandemic, spectators were sparse in central Stockholm, but the new Slussbron, or Golden Bridge as it's often referred to, still got a royal opening in the grey cloudy October weather. Pedestrians were allowed to walk on the bridge after the inauguration of the new Slussbron. Photo: Janerik Henriksson/TT

The King, Crown Princess Victoria and her daughter Princess Estelle solemnly cut a gold ribbon with a pair of gold scissors before crossing the bridge on foot with a troupe of children from local sports clubs in tow. The King, Victoria and Estelle walk with children across the new Slussbron that connects the Old Town with Södermalm at Sunday's inauguration. Photo: Janerik Henriksson/TT

The bridge opened to traffic on Monday morning but only on a limited scale. Motorists can only cross the bridge via Skeppsbron and Hornsgatan. From Stadsgårdsleden you can only cross by bike or via a ramp, and Katarinavägen is so far reserved for buses. Pedestrians have to make do with the eastern promenade for a few years. The Slussen junction is one of the city's main transit hubs. It hosts a clover-shaped road network, a warren of tunnels and walkways, metro and bus stations, and locks that let boats pass between Lake Mälaren and the Baltic Sea. Demolition work on the area has split opinion in the city for decades. The Golden Bridge with the Old Town in the background. Photo: Fredrik Sandberg/TT

The bridge was completed in its entirety in China by CRSBG, the world's largest bridge manufacturer, and was transported to Stockholm by cargo ship this spring.  The construction of the new Slussen is expected to continue until 2025. 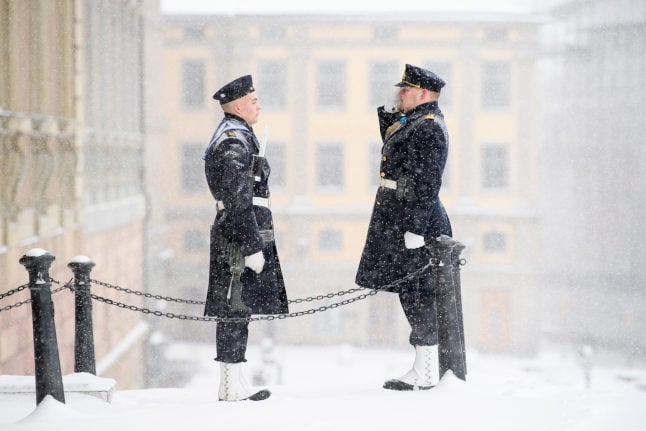