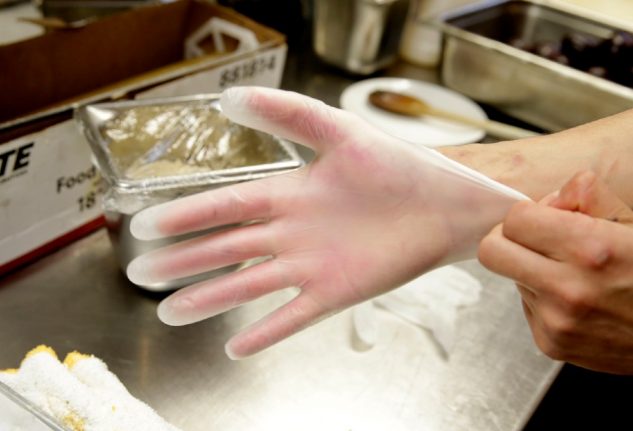 One million protective gloves were burned last summer, in the middle of the pandemic, according to the journalism investigation by Kaliber. Photo: Rich Pedroncelli/AP/TT

The radio programme revealed that large amounts of protective equipment from the National Board of Health and Welfare's national emergency stockpile had become too old to be used safely so had to be burned.

“I never thought I would see something like this, not what with the lack of protective equipment. Astonishing,” Elisabeth Antfolk, assistant nurse and union representative, told Kaliber.

When the coronavirus pandemic broke out in Sweden this spring, there were shortages of protective equipment, such as face masks for healthcare workers.

The municipalities and regions did not have enough in stock for the crisis so turned to the National Board of Health and Welfare's national emergency stockpile. These are medical supplies that have been stockpiled since the Cold War but due to less funding from the state, they have not been regularly replenished.

Kaliber's investigation revealed that large amounts of that medical stockpile were burned in June, including one million protective gloves and 235,000 face masks.

They were too old, or or did not reach today's standards of protection, according to Johanna Sandwall, crisis preparedness manager at the National Board of Health and Welfare.

“We don't think it's good to send out something that we know does not measure up and gives false security,” she told Kaliber. “I made the decision not to buy new (equipment) because we did not have any money for it.”

The National Board of Health and Welfare knew that the medical equipment did not measure up before the pandemic, but the money was spent instead on other things such as maintaining the stockpile of ventilators.

There have been several reports and investigations in recent years that have warned that preparedness in Sweden's regions and municipalities has not been sufficient. In 2018, the government appointed an inquiry into healthcare preparedness that will provide proposals on how it can be improved. It will present its report next year.

“We will be better equipped for the future and therefore we have appointed this inquiry,” Health Minister Lena Hallengren told Kaliber.