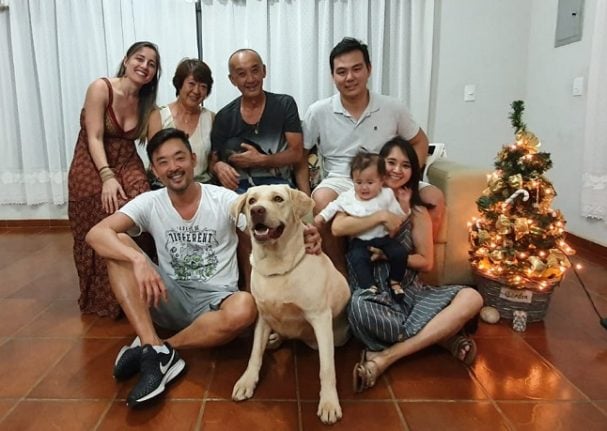 Fabio and family during a previous Christmas in Brazil. Photo: Private

“We are going to have a baby at the end of December, my parents were planning to visit us and help. On one hand, we are happy because our baby is coming; on one hand, I'm feeling sad. We travel to Brazil once a year for Christmas so it will be a long time without seeing them,” the 36-year-old told The Local.

Since relocating to Sweden, Fabio's Christmas has involved travelling to Brazil for several weeks with his wife, celebrating Christmas with family and New Year with friends.

When his wife discovered she was pregnant, they knew this year would be different as she would not be able to travel in the late stages of pregnancy, but his parents planned to travel to them.

“We hadn't made plans, we would have stayed home enjoying the baby,” he said. “Now it's only us, let's see how we are going to handle it!”

It was in September as coronavirus cases began to increase again in Sweden that the couple realised their plans would not be possible. Instead, they now hope to spend the day with a small number of Brazilian friends in Sweden, all in the same situation, with parents joining by video call.

Fabio is far from alone in having Christmas plans disrupted by a combination of travel bans and worries over the risk of the virus. And while the majority of people will be forced to rearrange to some extent, people living overseas, who already go long stints without seeing family and may have smaller circles in their new countries, are harder hit than many.

“It’s hard missing a year in the life of my elderly parents. I’m not sure how many more years of health they will have left. This is the longest I have been away from them during my lifetime,” said Katherine, a lecturer in Piteå, who usually spends Christmas travelling to see family in New Orleans.

And for Debarshee, a PhD student from India who has lived in Gothenburg for two years, Christmas usually means a long-awaited reunion with his girlfriend in New York.

“The two weeks together is the perfect way for us to start the year. We usually go to Rockefeller Centre on Christmas Eve and just walk about the city, do our Christmas shopping at Macy's and spend the rest of the time at home enjoying each other's company,” he told The Local.

At the time of writing, Debarshee was hoping that travel bans would be eased enough to allow one of them to travel, having now gone seven months without seeing each other. Until they get news one way or the other, they are unable to make any fixed plans for the holidays.

“Considering it has been nearly seven months now without having met each other, Christmas together would be a relief! We usually meet once every two months, even if it is for a few days. We initially had a plan for her to travel to Sweden, to attend my graduation for my Master's degree mid-November, but now that seems like a lost cause,” he said. Debarshee and his partner outside the Empire State Building during a previous winter season. Photo: Private

For Aida Alonso, a 33-year-old Mexican student in Gotland who usually travels home for the holidays, “Christmas for my family is a day where we laugh a lot, we eat a lot and we get the chance to tell how much we care and love each other”.

“On December 24th, I get together with my parents, uncles, aunts, cousins, nephews and nieces and we make a big dinner for everyone, we always have more food than we can eat. Not being able to see them will be hard,” she said.

These worries were exacerbated for cross-cultural families, like Jennifer, a researcher in Örebro. “Christmas is one of the only two occasions in which we can see our families, especially the extended one,” she said.

“We usually travel to France and Germany for a couple of days around Christmas, and back to Sweden for the new year. We already had to cancel our plans for this summer, and now are considering what to do for Christmas. It looks more and more likely that we are not going to travel this year at all. Whatever happens, it will be a last minute decision.”

More than half of the people who responded to The Local's Christmas questionnaire (36 out of 64) were still unsure what they would do for the holiday.

One in three (22) said they usually travelled to their or their partner’s home country but would not do so this year, while ten people said family who usually visit them in Sweden would not come, and a further eight said they still planned to travel over Christmas, but in a different way from usual, for example seeing fewer people or staying in hotels rather than with family.

“My mum is a stroke survivor and was going to come out early December to have a small Christmas with us,” said Ryan Boman, a 26-year-old executive assistant from the UK.

Although at the time of publication it was still possible to travel between Sweden and the UK without a quarantine at either side, they had chosen not to risk it since his mother could not afford to self-isolate and miss work if there was a last-minute change or her flight was cancelled.

Ryan added: “Due to the same reasons, she was unable to come out for our small wedding ceremony at the end of September and it has now been nearly a year since she last visited which has upset both me, my partner and in laws.” Ryan's favourite picture of him, aged five or six, with his mum. Photo: Private

Kathryn, a Brit who retired to Dalsland over a decade ago, was in a similar situation. One of her daughters owns a summer house nearby, where she usually stays over Christmas, along with Kathryn's son and oldest daughter.

“There are many parties between both houses. It's a very sociable time,” she said. But now it's uncertain whether her children will come at all, which would mean not having seen them (and a young grandson) in over a year.

“Since they are being very protective of us and self imposed a five-day quarantine when they managed to come over during the summer, I can't imagine that they will find it easy or an attractive proposition to do the same at Christmas. So it's likely we will spend Christmas on our own. I have been in the habit of visiting our children and friends in the UK approximately every six weeks. I haven't done that since the beginning of the year.”

Like Kathryn, some of the foreign residents we spoke to are used to spending Christmas in Sweden, but still anticipated big changes this year, from cancelling parties and activities to replacing family visits with Zoom or Facetime calls.

“We will have family Christmas dinner via Facetime, with parents and sibling joining,” explained Julija, a 30-year-old business owner from Latvia. Usually, her family come to Gothenburg to see her, spending two weeks sightseeing, shopping, and catching up, with the celebrations at theme park Liseberg one of the highlights of the visit.

American student and designer Jessica usually marks her December birthday with a julbord or Swedish Christmas dinner, which is just one of her festive traditions to be cancelled.

“We usually go to my sambo's mother's house to celebrate, but we are unsure if we will be able to do that. We also really enjoy going shopping and being out on the town during the Christmas season, and we love going to Skansen for their Winter Market event. All things we cannot do this year,” she said.

But again, the worst change for her was the impact on family visits, having already had to cancel summer plans to see her younger brother.

“I had hope that maybe things would be calmer by December. Sadly, that is not the case, so Christmas with my brother has been cancelled. I've been very sad about it, because I haven't seen him in two years now, going on three,” she said.

Most of the people who spoke to The Local were facing upheaval. But there were some who had found a bright side and were looking forward to a cosy Christmas with only their closest family.

“We're currently planning how to fuse English and Swedish Christmas traditions. The Christmas cake is going in the oven soon,” said British software developer Steve Brazier, who usually spends Christmas with family in the UK.

“It will be difficult Facetiming my loved ones yet again as we do weekly, but I will bring the warmth and love of my family to my home in Sweden instead.  I am looking forward to trying out a Swedish Christmas, and buying a real tree instead of my tiny plastic one!” said Lindsey LaMont, a 35-year-old marketer who has also had to cancel her US wedding this year due to the restrictions.

For a 31-year-old PhD student who moved to Stockholm from Germany this spring for work, the year has turned out far from their original plans. But they said: “If it turns out that we can't travel then I'll try to see the silver lining: unexpectedly we get to spend our first Christmas in our new home without any family pressure to be elsewhere. We take it as it comes and will be able to enjoy the season no matter what.”

Thank you to everyone who responded to our survey about Christmas. We aimed to include a representative sample of the responses, and whether or not we included yours, we read every one and appreciate the time you took to share your story and help others see they are not alone. The Local is here to report on the issues that matter to you and affect your daily lives in Sweden, and you are always welcome to email us at [email protected] with ideas or feedback.