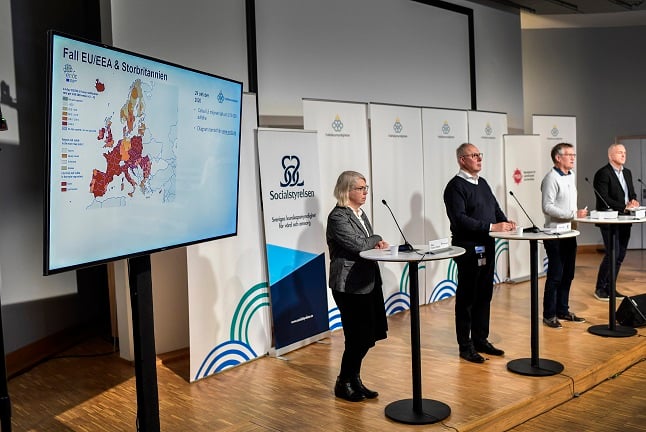 Three new regions in Sweden – Stockholm, Västra Götaland and Östergötland – on Thursday rolled out sharper coronavirus recommendations amid a rise in infections, after similar changes were previously made in Uppsala and Skåne.

That includes a recommendation to avoid close contact with people from a different household, and avoid indoor environments like shops, museums, gyms and libraries as much as possible. Exceptions are made for essential activities like receiving medical care or food shopping. Sweden marks All Saints' Day on October 31st, usually by gathering at cemeteries to remember dead relatives. This year, authorities have reminded people to avoid crowding at the busiest sites, such as the Woodland Cemetery in Stockholm, by spreading their visit out through the week, choosing a less popular time to go, or even marking the day online instead.

Some chapels and churches have opted to close on Saturday to ensure that people remain outdoors, while others are live-streaming their ceremonies rather than allow visitors. The Social Democrats presented a compromise on contested proposals to change Swedish laws around hiring and firing on Thursday. The party, which is in a minority government with the Green Party, wants to put forward proposals based on an agreement between the Confederation of Swedish Enterprise and the organisation PTK which represents white collar trade unions – but opposed by LO, which represents blue collar workers.

In Sweden, changes to labour laws are typically agreed between employer organisations and unions, but without LO's approval, the Social Democrats risk losing support not only from their own voter base but also from the Left Party, whose support is required for the minority government to stay in power. A new leader for the Left Party

The Left Party will formally elect its new leader, Nooshi Dadgostar, at its party conference this weekend. The party and Dadgostar's predecessor Jonas Sjöstedt has threatened to put forward a vote of no confidence in Social Democrat Prime Minister Löfven's government if he decides to push ahead with the labour law proposals outlined above.

The stance which Dadgostar takes could be decisive in the future of the government, which could be brought down as the three right-of-centre opposition parties would likely support any no confidence vote. Residents of Canada, Georgia and Tunisia, who were earlier exempted from a ban to enter the EU through Sweden, are no longer automatically allowed into the country.

Other exemptions to the ban all remain in place, including for residents of EU, EEA and Schengen countries as well as eight other countries, as well as people who are for example moving to live in Sweden, working in certain key jobs, or travelling for urgent family reasons, regardless of which country they are resident of or travelling from.