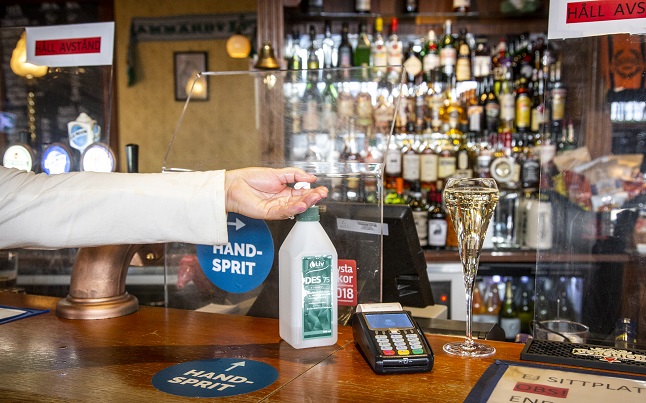 No more than eight people may sit at the same table at Sweden's restaurants under the newly introduced rule. Photo: Helena Landstedt / TT

Restaurants are already under special measures to reduce the spread of infection, which include a minimum one-metre distance between groups.

Under the new rules, no more than eight people will be allowed to share a table.

Asked how the number was decided, Public Health Agency general director Johan Carlson said: “There is no risk-free business or operation in our land when it comes to Covid-19, but there is a practical question, so that restaurants have greater clarity in how to handle guests.”

The announcement was made at a press conference held by Prime Minister Stefan Löfven, Health and Social Affairs Minister Lena Hallengren and the Public Health Agency's general director Johan Carlson.

Also at Tuesday's press conference, they announced that stricter local measures would be brought in  for three Swedish regions: Halland, Örebro and Jönköping.

The Local asked state epidemiologist Anders Tegnell for clarification on whether the local recommendation to avoid indoor environments applied to restaurants.

“Restaurants are regulated according to other laws and regulations, that's why it's not repeated here. And also for most of the regions we have talked to, they don't really see in their contact tracing that restaurants are a major cause of spread of the disease and that's why we have not repeated the advice here. There is lots of advice on how to avoid the spread in restaurants,” he explained.