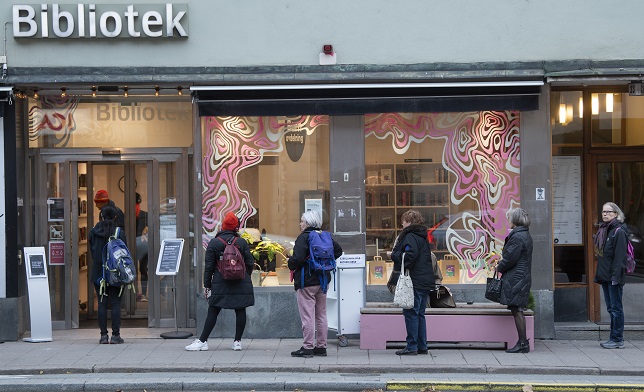 With both cases and deaths of the coronavirus now rising sharply in Sweden, the question is whether more regions will be covered by stricter local recommendations after today's biweekly press conference from authorities.

Eight of the 21 regions, accounting for around 70 percent of the national population, are currently subject to stricter rules, including to avoid close contact with people from a different household and avoid indoor environments like shops, museums and gyms.

It will still be too early to know from data whether the new recommendations have had the intended effect in these regions, since any changes in behaviour typically take at least one to two weeks to be reflected in case and death counts.

But there is some evidence behaviour has changed: the three largest cities in Sweden, all covered by the stricter rules, have seen slight declines in public transport use after they came in.

A press officer for the company operating Stockholm's public transport, SL, told the TT newswire that “there is a decrease in travel Monday-Tuesday this week compared to the corresponding days in the weeks before the autumn holidays”, but noted that crowding was still reported on 10-12 percent of journeys. Skåne reported roughly a 15-20 percent drop in public transport use after the new rules came in, and Västra Götaland also said there had been a slight decline.

Stockholm had to temporarily pause a scheme offering at-home test kits for Covid-19 after demand was so high that a backlog of 16,000 tests was created. But the home tests are available again from today, as planned.

The pause only affected people who order their home test kits themselves via Sweden's healthcare website 1177.se, not other testing such as that of patients and staff in the healthcare sector, nor elderly care. People in a risk group for the coronavirus will be able to apply for compensation if they cannot work due to shielding up until the end of March next year.

This is called 'preventative sickness benefit' and to be eligible, you must work in a job that can't be done from home or in an infection-safe environment, whether you're an employee or self-employed, and have a medical certificate proving the illness. The new extension will apply up until March 31st 2021, Sveriges Radio reported. A woman in Örebro has been prosecuted for endangering others after allegedly going to work as an at-home carer while knowing she was infected with the coronavirus. She met both patients and colleagues after receiving her positive test result. Several of them got sick, according to the TT newswire, although it is not possible to know exactly how they were infected. The woman has denied the charges.

Sweden's government is moving forward in introducing one of the policies promised by the ruling Social Democrats: extra annual leave for parents of small children.

In the run-up to the last election, the party initially proposed giving parents of children aged 4-16 an additional week of paid leave to be used during their children's school holidays and teacher in-service days.

Now the government is sending out three proposals — for an extra one, two or three days of leave — for consultation, meaning that relevant authorities will comment on the proposals, which the government may then adapt before presenting a bill to parliament. The Social Insurance Minister said that the reason for reducing the number of days was uncertainty over the economic recovery from the pandemic. Swedish Prime Minister Stefan Löfven has invited the leaders of the other eight parties represented in parliament for a discussion on the coronavirus. The first meeting will be a video conference call on November 11th, according to reports in Swedish media.

Talks between the party leaders about the virus situation and measures in place took place regularly through spring and early summer. There has mostly been broad political consensus on the nature of the response and focus on voluntary measures rather than laws around for example social distancing, though there has been disagreement over the details of exactly how to manage the response.

Leader of the right-of-centre Moderate Party Ulf Kristersson recently accused the government of “mixed messages”, for example by introducing stricter local measures at the same time as easing national recommendations. Thank you for the feedback we've received so far on our new Monday-Friday daily round-up of the news in Sweden. The verdict seems to be that members appreciate it, so we'll continue the round-up for now. If you have any other thoughts or questions, you are always welcome to email [email protected].