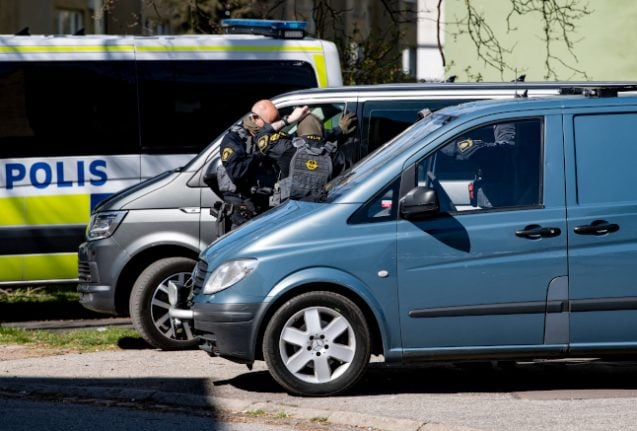 The six-month-long Operation Rimfrost was launched in November 2019 in response to a national outrage over the murder of a 15-year-old boy in Malmö's Möllevång Square.

It saw police redeployed to Malmö from across Sweden, and a so-called Action Week, when police attempted to place 300 people suspected gang members in custody. It then moved to Uppsala in April.

In June, the police celebrated the operation as “a turning point in the police's work against deadly violence”, holding a press conference and listing “Facts about Rimfrost”, which included a long list of statistics about police work during the period.

What are the report's claims?

In How can police tackle gang shootings? Stefan Holgersson, an associate professor at Linköping University, and Johannes Knutsson, Emeritus Professor at the Norwegian Police College University, claim that police chiefs exaggerated the success of Rimfrost.

“The production statistics used by the Swedish Police Authority to suggest that the operation was a success lay to a great extent at the same level as they were before the operation,” the report states.

Of the 20 weapons Malmö police said had been confiscated after the first month of the operation, he reports, eight concerned pepper spray or teargas, four were electroshock weapons, and one was a hunting weapon that had no licence. Only seven appear to have been guns that could have been used by gang members.

“It was easy to understand this as having a bearing on the operation's goal of reducing gang shooting, that 20 weapons had disappeared from the street where they could have been using for shootings in a gang environment,” he complained.

In fact, they could have had “no connection whatsoever to organised crime”, Holgersson writes.

“For example, it could have been a can of tear gas confiscated from a young woman who had it because she was afraid of walking alone in a park.”

The police, he complained, would not break down which of the arrests or seizures cited as a mark of the operation's success, were in fact a result of it, and which came from ordinary police work.

Holgersson, who combines his academic work with a career as an on-duty police officer, also notes that the police began to claim successes for the operation when its own internal communications suggested that it had not even properly begun.

“The cells in Malmö are starting to get full,” wrote the Kvällsposten newspaper on November 21st. “The police have in the initial phase of Rimfrost also seized people suspected of gun crimes.”

But according to the police's internal communications, the police officers who were supposed to travel to Malmö from elsewhere at that point had yet to leave, while the decisions on how the operation would work had yet to be taken.

According to one of Holgersson's sources during the 'Action Week' operation, the idea had been to seize 300 suspected gang members in one go, but after all the officers for the operation had gathered in Malmö, the prosecutors realised that there was only sufficient legal grounds to arrest one of them, meaning many of the extra staff had to go back to their home districts.

In May, police reported that the number of shootings in Sweden had increased in the previous years, despite Operation Rimfrost, leading Sweden's media to begin to doubt the operation's effectiveness.

“You can't interpret it any other way. The police have not succeeded in bringing down the number of shootings,” criminologist Jerzy Sarnecki told DN at the time.

Holgersson goes beyond shootings, showing graphs of arrests, and weapons seizures, which back up this picture.

Below is a graph, taken from the study, showing cumulative arrests in Malmö before and after the start of Rimfrost. Here is a graph showing the cumulative number of reported weapons crimes in Malmö before and after the start of Rimfrost. But when asked to give an example, he refused, saying police didn't have the time to respond to everyone who believed they had a better idea how to carry out police work.

The goal was “to make an impression”

In an interview with The Local, Holgersson's co-author Johannes Knutsson said that he believed that shock-and-awe operations like Rimfrost were more about demonstrating to the public that the police were taking action, in this case in response to the 15-year-old's murder.

“The police simply had to do something. And then they started this operation and found a lot of officers to send down to Malmö to strengthen the local police force,” he explained.

“Then there is an extremely big communication unit at the Police Authority, centrally situated, and they made a communications plan that stated that they should focus on on these type of statistics.”

“I think that the goal is of course, to make an impression, but there actually were more officers there who did things, but was it purposeful? Did they achieve their goals? That's what we, and ultimately the Swedish citizen, would like to know.”

Knutsson complained that he could not understand why police had launched Rimfrost at the same time as Malmö was running its ongoing Ceasefire pilot scheme, which was designed to assess whether the Group Violence Intervention Strategies which have been successful in the US could be adapted to Sweden.

“The problem now is that Rimfrost disturbs the scheme they're trying to conduct in Malmö. They've got three million kronor from the EU to make an evaluation of this policy, but now they're not evaluating the policy, because now you've got a mixture of them. It's plain stupid,” said Knutsson.