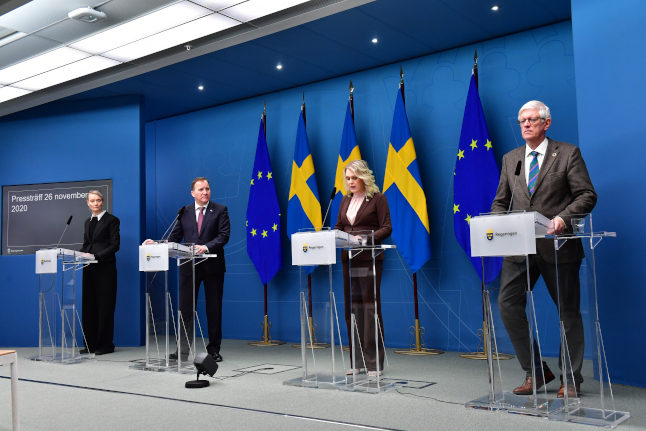 The scenario is based on the number of reported Covid-19 cases between August 24th and November 6th and outlines how the virus may spread from today until March. It predicts that the outbreak will peak in mid-December.

But Public Health Agency director Johan Carlson stressed that it may change as the situation develops.

“It's a scenario, not a prognosis,” Carlson told a press conference on Thursday, adding that because the coronavirus is a new virus it is not possible to compare to how it has developed in previous years, so it relies on a mathematical model based on what we know about the situation now, and is sensitive to several external factors.

He said the model is based on people following the current recommendations, for example keeping a distance and avoiding crowds, and limiting your close social contacts to people in your household (people who live alone may be able to form a bubble with one or two friends), and if that does not happen, the outcome may be worse.

A total of 236,355 people have tested positive for coronavirus in Sweden to date, including 6,622 fatalities and 3,187 intensive care admissions, according to the Public Health Agency's latest data released on Thursday.

“Remember the number eight,” Prime Minister Stefan Löfven told the same press conference. Sweden has banned public events of more than eight people, but the government has said that this is expected to set a standard for all social situations, whether or not such social situations are covered by the law.

Löfven also urged people to avoid crowded stores when they do their Christmas shopping.

The new scenario comes at the government's request, and the Public Health Agency is instructed to update it every other month. It is meant to help other Swedish authorities plan their own coronavirus contingency plans.

And although the scenario states that the peak will come in a couple of weeks, that doesn't mean the virus will go away any time soon. It also predicts that the spread of infection will remain higher than in summer until late February.

Sweden does not expect vaccinations of risk groups to start until January at the earliest.