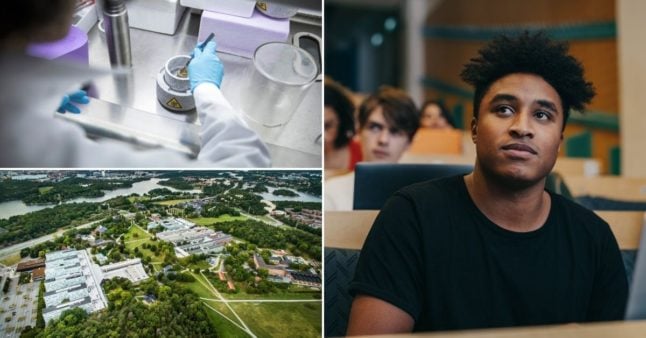 If you want to start a university course next autumn, you need to be thinking about applying now. Here, we look at six reasons to choose Stockholm University – which offers bachelor's, master's and PhD level programmes – in 2021.

A global university: apply by January 15 for autumn 2021 entry to master's and bachelor's programmes at Stockholm University  – or click here for information on PhDs

Stockholm University is ranked 69th in the Academic Ranking of World Universities 2020. Also known as the Shanghai Ranking, the prestigious list measures the quality of research at universities globally.

Key indicators include the number of “highly cited” researchers and how many articles a university has published in the renowned journals Nature and Science.

2. Tradition: the city of the Nobel Prize

When it comes to academic tradition and achievement, nothing matters more than the Nobel Prize. The Shanghai Ranking itself takes into account the number of alumni and employed researchers who have won Nobel Prizes. Awarded each year since 1901, the world’s most prestigious international award for academic, cultural or scientific advances is administered by the Nobel Foundation in Stockholm. The Nobel Committees, who select the winners each year, include several Stockholm University researchers.

Want to test yourself at one of the world's top 100 universities? Apply by January 15

It’s not by chance that Stockholm is home to companies such as Spotify and Klarna. The Swedish capital offers cutting-edge modernity, as well as tradition.

Students in Stockholm benefit from living in an international hub for technology and innovation. Sweden is now ranked second globally for innovation and Stockholm's thriving start-up scene and entrepreneurial spirit offer a host of opportunities for future career development.

And whether you’re attending face-to-face classes or studying remotely, you can be sure of fast internet speeds for any video sessions or urgent assignments. A ranking by Fastmetrics placed Sweden sixth globally for median download speeds in 2020.

Foreigners in Stockholm are often amazed by how easy it is to get by in English. In the latest English Proficiency Index, which looks at data from more than two million non-native English speakers, Sweden came fourth out of 100 countries and regions, while Stockholm was sixth among cities globally.

Both easily qualify as “very high proficiency” – the highest category. The report accompanying the index notes that high levels of English enable connections that can help people in their careers, while also being “intrinsically valuable”.

Stockholm University offers 75 master’s programmes taught in English, as well as some bachelor's programmes – click here to find out more. Should you want to learn the local language, it's also worth knowing that the university offers free Swedish classes to all its international students.

5. To focus on future jobs

The global economy has experienced huge disruption in 2020. But if you’re about to begin studying, this could be an opportunity to focus on the skills that will remain in demand – or perhaps even those that could help humanity avoid or deal with future crises. Stockholm University offers many courses, where you can learn such vital skills. For example, if you study life science, you could benefit from the unique technologies and expertise at SciLifeLab, a national resource funded by the Swedish government, in which Stockholm University is a partner, as well as the collaborations it fosters with industry and other partners.

SciLifeLab was recently announced as the host for a 12-year funding initiative to support data-driven life science in Sweden, using AI and growing computing power to advance research in areas including molecular biology, precision medicine and epidemiology.

The initiative involves 3.1 billion Swedish kronor of funding from the Knut and Alice Wallenberg Foundation to foster the next generation of life scientists.

Stockholm University’s main campus is located in the middle of the Royal National City park, a ‘green lung’ that stretches around and through Stockholm.

As the world’s first national city park, it's an ideal place for walking and experiencing nature. On the modernist Frescati campus within it, you’ll also find a wealth of art, which was incorporated into the vision for the campus from the early planning in the 1960s, and lots of interesting architecture worth exploring. Stockholm as a whole is also one of a handful of European cities with 40 percent or more of public green space. The city's location, where Lake Mälaren meets the Baltic Sea, provides endless picturesque views over the water.

Stockholm University offers a wide range of programmes at bachelor's, master's and PhD level. Apply by January 15 to start your bachelor's or master's studies in Autumn 2021 – or click here for information on PhD studies.