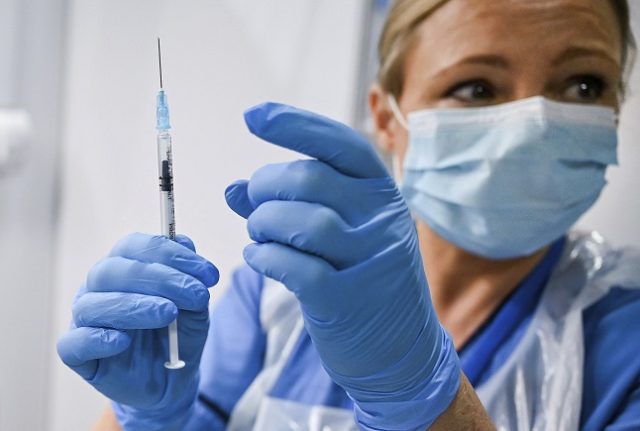 A nurse in the UK prepares a vaccine as the public vaccination programme gets under way. Photo: Jeff J Mitchell/Pool via AP/TT

When will coronavirus vaccines start in Sweden?

The first vaccinations in Sweden are expected to start straight after Epiphany, so on January 7th, a Thursday.

But if things run very smoothly, it could even happen earlier. Marie Morell, head of healthcare for Sweden's Municipalities and Regions (SKR) said the 21 administrative regions – which in Sweden are responsible for healthcare – are ready to begin as soon as the vaccine is delivered.

“Should everything go well, there is even a chance of getting started as early as mellandagarna [the period between Christmas and New Year],” she said.

The UK became the first country in the world to roll out the Pfizer BioNTech vaccine outside clinical trials, beginning on December 8th. Sweden, like other countries in the EU, is waiting for the vaccine to be approved at the EU level which is expected to happen in late December.

How many people will be vaccinated in Sweden?

Sweden's plan is to make a coronavirus vaccine available to all adults, as well as under-18s in certain circumstances, in 2021.

In the first three months of the year, 4 million doses are expected to arrive in Sweden. Since the vaccine requires a double dose, that's enough for 2 million people to have the vaccine, or a fifth of the total population.

Who will get vaccinated first?

The Swedish Public Health Agency has recommended that people are vaccinated in the following order:

These first three priority groups include around 570,000 people in Sweden. You can read the agency's full report here (in Swedish only).

In total, around 2.6 million Swedes belong to risk groups for the coronavirus, including people aged over 70 and those with certain pre-existing conditions.

These people would be next in line for the vaccine after the first three priority groups, followed by the rest of the general population. At the moment there is no information about whether there will be a priority list for the rest of the population, and what this would look like if so.

The vaccine will be voluntary.

It is the regions' responsibility to carry out vaccinations, so there may be slight differences around the country based on what best suits the local demographic and operating capacity. A phial of the Pfizer-BioNTech COVID-19 vaccine at the Royal Victoria Hospital, in Belfast, Northern Ireland. Photo: Liam McBurney/Pool via AP/TT

Will children be vaccinated?

At the moment the plan is for all over-18s to have access to a coronavirus vaccine in the first six months of 2021.

Under-18s would also be included in this phase if they belong to another risk group, but other under-18s are not mentioned in the Public Health Agency's vaccination plan.

The vaccine will be free for people receiving it, according to the government. The Local has asked for clarification about what applies for people who normally pay full price for their healthcare in Sweden, such as non-EU citizens or EU citizens without an EHIC card.

The government will cover the costs of just over 9 billion kronor plus further money to support running costs, although it is the individual regions which are responsible for carrying out the vaccinations. The current payment agreement covers all vaccinations carried out during 2021.

How do I get my vaccine?

The vaccine is voluntary, and it is not yet possible to apply to book a time. If you belong to one of the three first priority groups, you or your caregiver or employer should be informed about the vaccine soon.

Because the vaccination programme will be organised at a regional level, the best place to find information about what applies to you is likely your region's website or the 1177 page for your region.