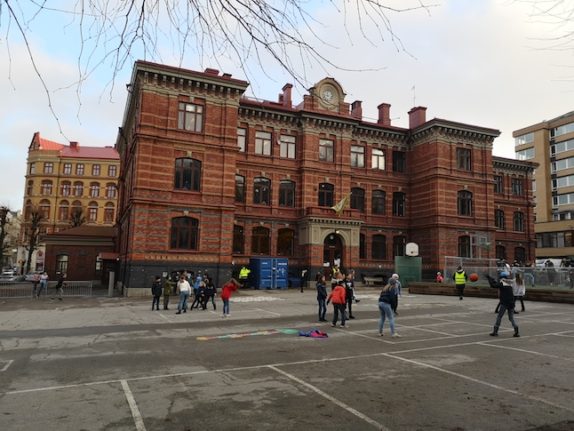 In central Gothenburg, at Viktoriagatan, lies the Jensen Grundskola, a school for grades six to nine or pupils between about 12-15 years old. For this age group, lessons still take place primarily in person in Sweden, though upper secondary schools (for pupils aged around 16-18) returned to online learning as of December 7th.

The school building is stately but modest in size, with a narrow staircase and fairly small classrooms.

The hallways are covered with wooden panels, “a bit like a Harry Potter school,” as headmaster Sebastian Vanneryr, dressed smartly in a suit, says — not without pride. “We score high in all measurable areas, but we are proudest about our studiero (literally: study calm, a good environment for learning, ed.). Would you like to write something about that too?”

Vanneryr points to a series of framed portraits of former students, standing atop blue lockers. “These are students who have all achieved the highest possible score in the final exams. They stand here as inspiration for our current students. It gives them a goal to strive for.”

Today, however, the topic of conversation is not school rankings, but something more practical and, currently, universal: how does a high school handle the pandemic?

Vanneryr is straightforward: there is, honestly, not that much they can do.

However, it still proves difficult to chase everyone out, the rector says. “The pupils comment: ‘Don’t we spend the rest of the day together in a classroom? Then why not during the breaks?’”

And what about social distancing? “The students are not allowed to touch one another, but there’s no way we can stay at arm’s length at all times. The classrooms haven’t suddenly grown larger, nor have the groups become smaller. Pupils and teachers are just sitting as close together as usual. I simply don’t see how we could change this.”

He opens the door of a classroom where an English lesson is in progress The students are seated two by two. Teacher Eva Brown's desk is right in front of the first row of students; there is no place to move further back. She stands with her back literally to the wall. When the bell rings, the students all flow out into the hall at the same time. A group of teenage boys sits shoulder to shoulder against a row of lockers on the floor. They box, hug, and shake hands with their friends who join the group from other classes.

According to Justus, 12, current school days are not that different from those before the pandemic: “We have to wash our hands and have mandatory breaks outside.” But they still eat lunch together in the dining hall. As for social distancing, he says; they don't do that either.

“No, I don't think any of us are afraid,” says Emil, 13. “There have been quite a few teachers and kids falling ill, but most of them don't get very sick.” Are classmates with infected family members approached differently? Evaded, perhaps? “Nah”, both Justus and Emil answer, nonchalantly.

Since my visit to the school, the Public Health Agency updated its guidelines (on December 1st) to say that even symptom-free children should stay home from school if a member of their household tested positive, a reversal of previous guidance.

During spring, the school temporarily closed its doors.

Vanneryr says: “Everywhere in Europe, secondary schools switched to distance learning. We assumed that it was only a matter of time before Sweden would choose the same route. But that measure never came, and after a month we decided to open up again.”

Some parents and educators would have preferred to continue home-schooling. “But not our director, who wanted to conform to the guidelines of Folkhälsomyndigheten (the Swedish Public Health Agency, ed.). Plus, we couldn’t guarantee the same educational quality,” explains Vanneryr. The Public health agency states on its website that it “does not currently consider it necessary to close all schools in Sweden”.

It explains the decision saying: “There is no scientific evidence indicating that such an intervention would have any significant impact on the pandemic, nor has any major transmission of Covid-19 in schools been reported

“Closing schools and pre-schools would have a negative impact on society. For example, essential workers to the public (e.g. healthcare staff) would need to stay at home with their children. It could also put vulnerable groups, such as grandparents, at risk if they help out with childcare.

“School is also a place of safety and stability for many children.(…) However, it is of utmost importance that staff and children who have any symptoms of illness stay at home.”

The guidance has since changed for symptom-free pupils with family members who have tested positive for Covid-19. Vanneryr says many students were not getting tested despite cases of illness in their home environment: “They have no or few symptoms, find it too much trouble. Sometimes they have to wait for over a week for the results.”

Even before the Public Health Agncy's rule change, the school advised parents to keep children at home if anyone in the family has the virus. “But it’s a recommendation, we can’t enforce it. Some parents decide to send their children to school anyway.”

The principal is especially concerned about the older teachers, saying: “We have teachers in their 60s and 70s. They cannot imagine life without this work. But they do fall within the risk group.”

There have already been several outbreaks among both teachers and students. According to Vanneryr, these outbreaks are “most likely” related to, or originating in, the school.

During the break, teacher Eva Brown says that it is “mentally challenging”, working during the pandemic.

“I am concerned about my own health and the health of my colleagues”, she says. “The rules that apply to the rest of society, like social distancing and working from home, do not apply to us. We have to carry on as usual.”

Teachers and health workers are being sacrificed, Brown says. “I see between 200 and 300 students, parents and teachers every day. We are thrown under the bus. Not all students have themselves tested, or they return to school prematurely. ” She believes that all workers in education and healthcare should be the first to get the vaccine as soon as it is available. “By way of reward.”

Because this school is doing so well, Vanneryr says, “we can deal with something like corona. But at schools that are already struggling, corona could be the final blow.”