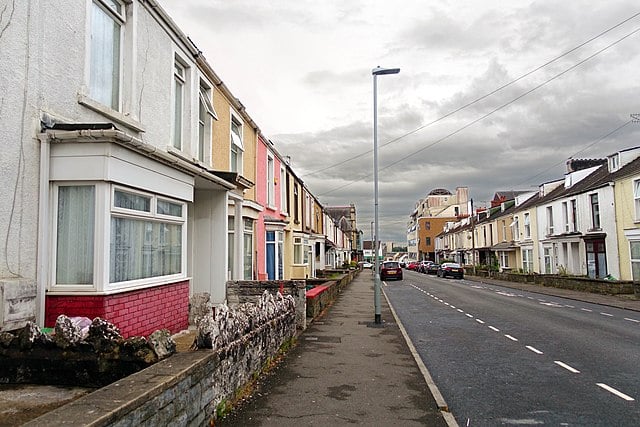 Swansea is home to one of the four displacement centres in Wales. File photo: Tiia Monto, CC BY-SA 3.0

According to UNHCR statistics for the UK, at the end of 2018 there were 126,720 refugee and 45,244​ people with pending asylum cases in the country, mainly coming from Iran, Albania, Iraq and Pakistan.

Although many of the challenges the refugee community faces depend on the UK government – which is responsible for asylum policy – the Welsh government has several times renewed its commitment to become a Nation of Sanctuary, meaning ensuring individuals the best chance to integrate and rebuild their lives in a new community.

Asylum seekers don’t have the right to work in the UK and therefore rely on public assistance (which includes housing – which is provided but cannot be chosen – and cash support – currently set at £37.75 per person, per week, making it £5.39 a day for food, sanitation and clothing). The consequences in terms of mental health are substantial.

In the case of children and young people, “for those left behind, separation anxiety from not being with parents can be an issue. For those who travel, as well as the dangers of the journey itself, there is evidence that some suffer from lower levels of psychological development, often through not being able to access provisions in a host country that require a legal entitlement, such as for school places'', explains Paul Hutchings, Assistant Director of the Academic Discipline of Psychology and Counselling at the University of Wales Trinity Saint David.

No matter the age, the uncertainty characterising living conditions in the host country, together with the grief of leaving one’s country behind, is likely to have a significant impact on refugees’ mental health.

To these existing problems, the Covid crisis added another layer of complexity. The uncertainty caused by the pandemic may well be more keenly felt by people in already precarious positions or affected by pre-existing mental health conditions, which affect around 22 percent of adults living in conflict zones, according to the World Health Organisation.

Moreover, the real number of asylum seekers and refugees struggling with mental well-being during the pandemic is even harder to identify, as help-seeking behaviours might be discouraged by the health crisis.

Renewed in 2020, in 2019 Wales drafted a Refugee and Asylum Seeker Plan, aimed at reducing inequalities experienced by refugee communities and increasing the access to opportunities. This could not work, however, without the contribution of the long-standing tradition of associations and charities active in the territory.

A very simple, yet deeply transformative, approach to mental care for children and young people is offered by the African Community Centre. Founded in 2004 to offer support to the African community in the city, this charity has become more and more inclusive towards other communities and now works with refugees regardless of their countries of origin.

With a team of 11 people, it operates in Swansea, a multicultural city and one of the four displacement centres in Wales.

“Quality over quantity” is the motto of Jill Duarte, counsellor and director of the African Community Centre in Swansea.

The charity aims to see 25 children and young people per year. “It's open-ended. We might say okay you can start with 12 sessions, but when it comes to children, Children in Need very much wanted that to be the opportunity to have more if that was needed. So we kept the numbers fairly small because of that”.

Funded with £93,000 in total for 3 years starting in 2017, it sees three out of the 11 counsellors working in the charity specialised with BAME children and young people with asylum background.

One-to-one sessions and play therapy aim to offer a free and safe space where children and young people can express, through words or in other forms, their experiences, face them with a supportive figure and digest them finding a new meaning or a new ending.

“Making them feel that they're in a safe place and that you want to listen is key” explains Jessie Jones, counsellor working with BAME children for Children In Need.

“A lot of the work we do deals with trauma. You've got to treat it carefully, you can't just open it and it will come out. You've got let them feel comfortable and not overwhelm them. So sometimes they're just trying to deal with what's happening in the moment and when they feel safe and comfortable, then they can deal with what's previously happened”.

“I brought up this documentary about young boys in Islamist schools with Abdo* and I think it sparked off some trauma for him,” . He couldn't talk about what had happened to him. So I used colours. He told me black and red,” explains Jill Duarte, about one of her clients, a refugee minor who arrived in the UK unaccompanied.

Once the minor gets access to services geared towards mental well-being, like in the case of Children In Need, the challenges are not over yet.

If children don’t speak the language, the presence of an interpreter is essential.

“That can also bring its own issues because you're not just building trust with the client. You've got three [people] working together so that you have to keep reminding the client that confidentiality is paramount. That's really super important, especially with teenagers”, comments Duarte.

Another way the presence of a third person in the therapy room might affect the construction of trust is when interpreters do not only translate, but add their own bits. The same happens when the third person in the room is interpreting and conducting legal work to assess the minor.

“They come from a very legalistic background and that doesn't work because it's quite frightening” continues Jill Duarte.

It is also not unusual that the interpreter intimidates and discourages the minors from opening up, because of the shared cultural background itself, making them feel they’re not free to open up for real.

And even in the case the language barrier does not constitute a problem, the codes and behaviours internalised in the home countries might not necessarily resonate in the host country.

“In many African countries looking an elderly in the eyes is considered disrespectful” continues the director of the centre, “You might want to say, well just look at my chin, or maybe wear a pair of glasses so they can't really see your eyes”.

“I think as a counsellor working in this field it is really essential to understand the culture of where the child is coming from, what's acceptable and what's not.”

Besides, in many cultures there is still a negative stigma around mental health. “I've so many children doubting how talking was gonna help that after two or three sessions came to me saying ‘I didn’t really want to tell you, but it’s helping me!’”, says Jessie Jones.

Triggers in children and young people with asylum-seeking background are many and one of them is age. Turning 18 is a crucial milestone, both in terms of whether minors will have to leave or remain in the UK and for their eligibility for support from social services. There are also cases in which the precise age of the minor is unclear and this might be a source of great anxiety.

The Covid-19 pandemic affected many of these projects, particularly those aimed at younger children.

When children are very young, play therapy is the one method to go. Examples are the Welsh Refugee Council’s project Safe Play Spaces – where children from the most vulnerable refugee families relocated in Cardiff can enjoy some safe play time and “just be children”, as stated on their website – or the play therapy provided by Children In Need. Many of practices have become difficult to carry and some came to a halt.

On the other hand, therapies with children above 10 and teenagers shifted online, giving consistency to the counselling path.

The Children In Need project has been granted six more months of funding, used to finance iPads and internet data for the children to attend online sessions in Covid times.

With the idea of keeping the online option open even when the face-to-face sessions will be restored, the results of online session seem to be promising. “I think they feel more comfortable [to open up] in their own home” says Jessie Jones.

Therapies are assessed through evaluation forms by the clients themselves – and, if too young, by the parents. According to Jessie Jones however, some kids might feel the need to please the counsellor, which is why she relies more on monitoring tools, like CORE10, usually used at the beginning, in the middle and at the end of the therapy period. Going through the assessment of items like anxiety, depression, trauma, physical problems with the client provides the children a guide to reflect on how they feel and the development during the sessions is what matters the most to the counsellors.

Providing access to counselling and mental health support is not a ground-breaking idea, but oftentimes the most successful ideas are the simple ones.

And the simplicity of the idea of unravelling the complexity of human experiences through different forms of therapy has the asset of being simply replicable. As suggested by Jill Duarte, whenever there are funding and qualified and empathetic counsellors aware of cultural differences, this can be offered over and over again.

This however doesn’t operate in a vacuum. It wouldn’t work without the cooperation between different levels of governance and without the harmonization of schools, home shelters and associations working in different fields towards the same goals.

Effective responses don’t have to be complicated or concocted. Having qualified, empathetic, well-trained counsellors is not an idea requiring new technologies or futuristic visions, but it does require funding, cooperation and a human perspective.

Marta Viganò is an Italian reporter and journalism student based in the UK covering social and environmental justice. You can find her on Twitter as @msvdaresto.