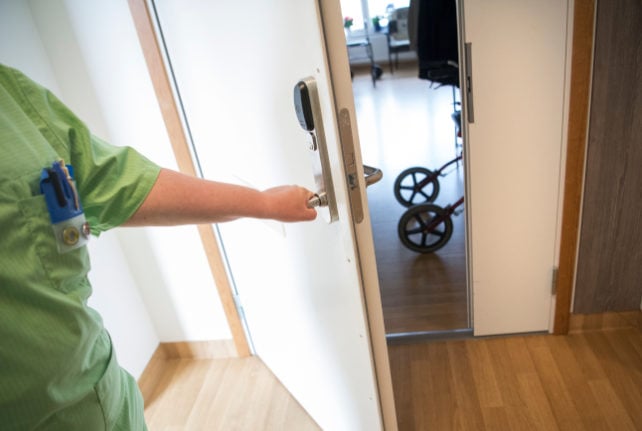 It is headed by Mats Melin, an attorney who formerly served on Sweden's top court for administrative cases.

On Tuesday, their first report was presented, which looks specifically at the handling of the pandemic in the elderly care sector. A final report, covering multiple aspects of the approach, is expected by February 2022.

The 300-page report is summed up like this in the English version: “Apart from the general spread of the virus in society, the factor that has had the greatest impact on the number of cases of illness and deaths from Covid-19 in Swedish residential care is structural shortcomings that have been well-known for a long time. These shortcomings have led to residential care being unprepared and ill-equipped to handle a pandemic. Staff employed in the elderly care sector were largely left by themselves to tackle the crisis.”

Protecting the elderly population – an age group which is particularly vulnerable to serious illness from Covid-19 – was a key tenet of Sweden's pandemic response.

The government and Public Health Agency have both admitted this failed, while Sweden's healthcare watchdog has condemned “serious flaws” in elderly care during pandemic. The commission's report looked into exactly what led to these failures, and who is responsible, but also noted that Sweden does not have an especially high share of deaths in care homes as a proportion of total Covid-19 fatalities compared to other countries. The report states that the main factor in the problems in residential homes for the elderly was simply the fact the virus spread so widely in society.

Some other key factors were raised.

The measures put into place in spring came too late and were insufficient, according to the report – despite the fact it was known early on that the elderly and care home residents were a vulnerable group. For example, the commission found that the ban on visits to care homes should have been put in place earlier – but also said that there should have been a clear exception made for end-of-life visits.

“The fact that many people died without a relative by their side is unacceptable, even if the ban could be motivated as part of the strategy for limiting the spread of the virus,” the report states.

The report highlighted structural issues that had been raised by the OECD and WHO even before the pandemic, such as low levels of staffing and expertise. The commission proposes that this be reviewed, and in particular calls for fewer zero-hours contracts. Limited PPE was also raised as an issue. The report shows that two government agencies noted in early February the risk of a possible lack of protective equipment, but that the National Board of Health and Welfare only began preparing an overview of the situation in municipalities in April, “long after the virus had entered residential care for older people”.

And the commission criticised the Public Health Agency for only publishing its national testing strategy 17 days after it was urged to do so by the government.

Who is responsible and accountable?

This is a key question. In Sweden, care homes are managed by the 290 municipalities; healthcare is managed by the 21 administrative regions (though in both elderly care and healthcare there are also private companies); the Public Health Agency has taken the lead in managing the overall pandemic response; and the government bears overall responsibility.

The report raised this fragmentation in itself as a problem.

But the report reiterates the overall responsibility of the government, even if specific agencies were directly responsible for different elements of the strategy.

“The ultimate responsibility for these shortcomings rests with the Government in power – and with the previous governments that also possessed this information [about structural shortcomings in elderly care],” the commission wrote.

The commission will carry out further reports into Sweden's coronavirus response, including assessments of the handling of the pandemic more generally as well as specific issues, such as provision of PPE and the testing and contact tracing strategy.

At a short press conference following the report's presentation, Prime Minister Stefan Löfven said he agreed with its findings.

Asked by the TT newswire if there would be any consequences for those responsible, he said he had not yet read the report and could not “draw the most far-reaching conclusions”.