Eight people who flew from the UK to Västerås on New Year's Day were ordered to leave Sweden after they lacked the required negative Covid-19 tests, according to SVT Nyheter.

In total, there were about a hundred passengers on the plane that landed in the afternoon and eight were missing the tests that now have to be shown from January 1st for certain passengers from the UK to be allowed to stay in Sweden.

Swedish citizens, people who live and work in Sweden, and people travelling for urgent family reasons, are exempt from the current entry ban from the UK to Sweden, which is in place until January 21st.

But the latter two groups now have to show a negative coronavirus test before they are allowed to enter Sweden.

The test must have been carried out no later than 72 hours before the plane lands in Sweden and show that the passenger does not have an ongoing Covid-19 infection.

According to the new law, Swedish citizens do not have to show a negative test, but must test themselves as soon as they arrive in Sweden.

Matt Hope, who works for The Local in Sweden was on the New Year's Day flight to Västerås and noted the hold ups due to the extra checks, not just for Covid-19 but residency documents post-Brexit.

“The main thing was the police presence and the first check on the runway, then the second different check by passport control,” he says.
He added that there were non-Swedish citizens on the flight who didn't know about the Covid-19 test requirement or hadn't made a resident application post-Brexit as they had until September 2021.
However the refusals of entry were only due to missing Covid-19 tests. 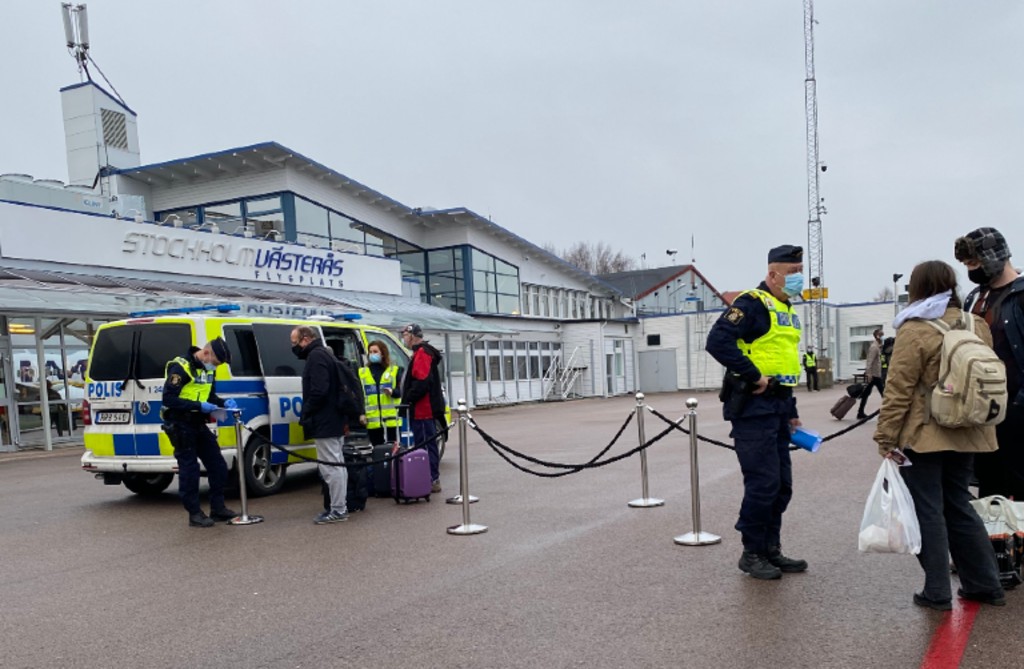 Extra police checks for passengers arriving from the UK to Stockholm-Västerås airport on 1st January 2021. Photo: Matt Hope/The Local
The police fear that surveillance at airports will become a recurring task in the near future.

“At 1300 we got the knowledge that the plane would land. It was the border police who demanded reinforcements from us in advance”, says Magnus Jansson Klarin, press spokesperson for RLC Mitt.

“We will probably see more of this. Since it is a new law, it may be that the information has not reached everyone, but as a traveller you have an obligation to find out what applies.”

The rejection took place in calm circumstances, even though the disappointment was great.

“It's not fun to have to turn around when you have just landed, so there were no cheerful faces right away, but it's just accepting the situation”, says Magnus Jansson Klarin.

The decision to tighten travel restrictions against the UK earlier this month was taken due to the spread of a mutated form of coronavirus, which first appeared in London and Kent.

It is reported to be more contagious than other strains, but based on what scientists know so far, does not appear to cause more serious illness.

Here's a link to the Public Health Agency's guidelines for travellers from the UK once they've arrived in Sweden. These recommendations apply to everyone, regardless of whether or not they tested negative before arrival.

READ ALSO: How to get tested for coronavirus in Sweden (with or without a personal number)