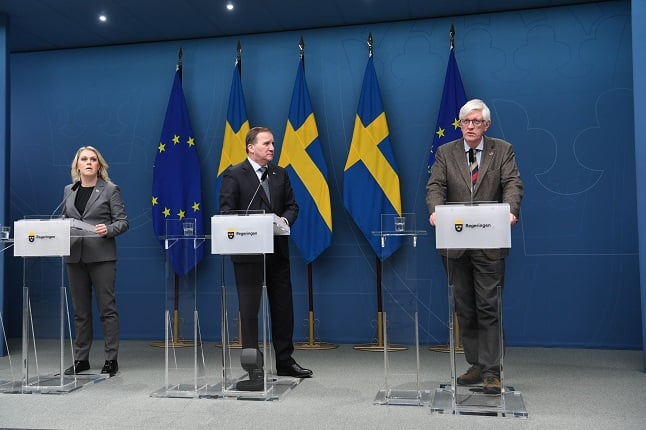 These two measures are legally binding and were introduced under the pandemic law passed by parliament earlier on Friday. People who violate them could face fines, though Health Minister Lena Hallengren said the exact amount had not yet been decided – this can be decided by the local authorities which are responsible for inspections.

The eight-person limit on private events applies for example to events in commercially hired venues, in order to close a loophole in the public event limit.

It doesn't apply to private gatherings – for example meeting people in a private home – but everyone in Sweden is still expected to socialise only within small circles of close family and friends. The difference is that under the new measure, people who rent a venue for an event of more than eight people can be fined, even if the event was private.

“We cannot regulate how people move and who they have contact with at home, at the gym or in shops; rather this is where the general recommendations apply,” said Public Health Agency general director Johan Carlson.

He also said: “Most people who are infected are infected at home or at the workplace, the new law doesn't relate to these areas. That is why it is still important to follow the general recommendations.”

Visitors to shops, gyms and public pools, among other places, will be limited to a maximum of one person per ten square metres. For example, a venue with 50 square metres' space must only allow five visitors at a maximum – but the surface area taken up by shelving, cash registers and so on should not be included in the calculation.

These maximum limits must be advertised on signs at every entrance, and stated in mandatory risk assessments. Venues found to violate these rules may be handed fines by local authorities, although individuals won't be fined if they enter a shop with too many people.

Since late December, these venues have been subject to a Public Health Agency recommendation to limit the number of people at any one time, which the agency says “many have followed”, but this was not legally binding.

When The Local asked what prompted the decision to introduce the new legally binding measures after previously focusing mostly on public health recommendations, Health Minister Lena Hallengren said she disagreed that that was the case.

“We have had both voluntary but also legally binding measures from almost day one,” she said, citing Sweden's ban on visiting elderly care homes and hospitals, the laws in place for restaurants and the move to distance learning for over-16s. “This new law gives us new tools to handle the pandemic, which we need because this pandemic is still in action.”

In response to a second question from The Local, Public Health Agency general director Johan Carlson said the agency has not formally measured the number of people in shops and gyms or the level of compliance with the agency's recommendations of how these businesses should curb the spread of the virus.

“We have got signals of course from the local authorities that there are still problems in many areas, and these recommendations were issued before Christmas about the maximum number of people. We wanted to be very clear and make these legally binding because I think that's easier for everybody to handle, both the shopkeepers, gym owners as well as supervision from local government so I think it's a better idea, more straightforward and more transparent,” he said.

Dagens Nyheter's reporter asked what difference it would have made had these rules already been in place in the autumn, ahead of the second wave of the virus.

Hallengren responded that the government has always had the ability to put forward individual proposals to parliament and cited recent measures, such as a ban on post-8pm alcohol sales and public events over eight people, that were “significantly tougher and more far-reaching than in spring”.

She emphasised that the point of the new pandemic law was to create “a set of tools that can be used for a long time to come”, including easing the restrictions in certain areas at the right time, rather than blunter tools which can only be put in place or completely removed.

Where can I learn more about the new rules?

EXPLAINED: What you need to know about Sweden's pandemic law (The Local)

The Public Health Agency (Swedish only)

The Swedish government (Swedish only)