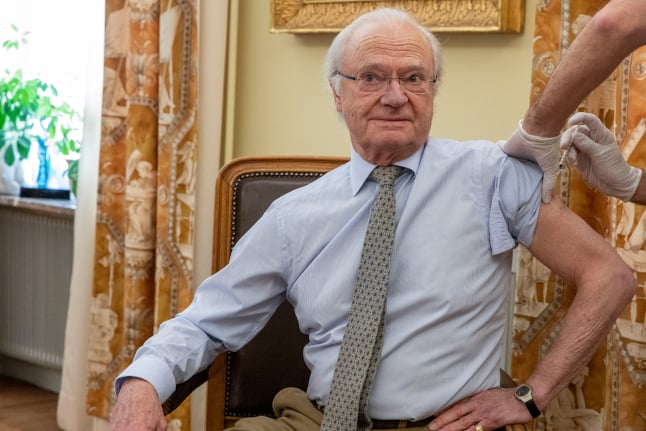 The King and Queen were vaccinated on January 15th at the Stenhammar Palace in Södermanland, south of Stockholm, where the couple have been spending most of the pandemic.

They were vaccinated at the advice of the King's physician, said the Royal Court.

“The great vaccination against Covid-19 is now under way across our country. It is my hope that everyone who has the opportunity to get vaccinated in the coming months chooses to do so, so that we can get through this difficult time together and as soon as possible,” said the King in a statement.

No further information was immediately available on Friday.

By the end of last week, around 80,000 people in Sweden had been vaccinated. Sweden has stated its ambition of offering the vaccine to the entire adult population, as well as under-18s belonging to risk groups, by the end of June 2021, and last week the Public Health Agency said it was currently on track to reach this goal.

In the first stage, around 570,000 people in the top three priority groups (people in care homes or receiving at-home care, as well healthcare workers, carers and household members of these people) will be given the vaccine. It will then be offered to other people in risk groups (including people aged over 70 who do not fall into the first priority group), around 2.6 million in total, before it is given to the rest of the adult population.

Several regions have already vaccinated all care home residents and staff against the coronavirus, or will have reached that goal soon, Health Minister Lena Hallengren told media on Wednesday.