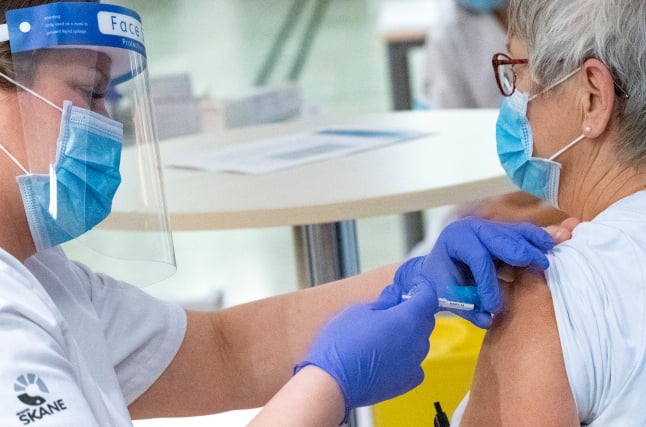 She said that no regions have so far reported problems with delivery or carrying out the vaccination, but one logistical issue has arisen related to the Moderna vaccine, the second to be approved by the EU.

Some regions initially said they would not use the vaccine, the first doses of which will arrive in Sweden over the coming days, as the company is not covered by Sweden's medical insurance system. This could for example lead to a grey area relating to whether compensation was guaranteed to anyone who suffered side effects – but Hallengren has now guaranteed that this will be the case, with any costs covered by the government.

Another logistical hurdle was covered by Arbetsvärlden, which reported that some municipalities have seen a delay in the roll-out of vaccines to people who receive at-home care – one of the priority groups. This is because Sweden's 290 municipalities are responsible for at-home care, while the 21 regions manage vaccinations – and the municipalities must first get consent from the care receivers before they can pass on their personal details.

Some municipalities told Arbetsvärlden they were still working on collecting consent forms.

By the end of last week, around 80,000 people in Sweden had been vaccinated, and the rate of vaccination should increase once the Moderna vaccine starts arriving (Sweden is already using the Pfizer BioNTech vaccine).

Vaccine coordinator Richard Bergström said the country is currently receiving 100,000 doses of the Covid-19 vaccine per week, which will rise to 300,000 soon, and to 500,000 per week in April when a total of five different vaccines are likely to have been approved.

Sweden has stated its ambition of offering the vaccine to the entire adult population, as well as under-18s belonging to risk groups, by the end of June 2021, and last week the Public Health Agency said it was currently on track to reach this goal.

In the first stage, around 570,000 people in the top three priority groups (people in care homes or receiving at-home care, as well healthcare workers, carers and household members of these people) will be given the vaccine. It will then be offered to other people in risk groups, around 2.6 million in total, before it is given to the rest of the adult population.