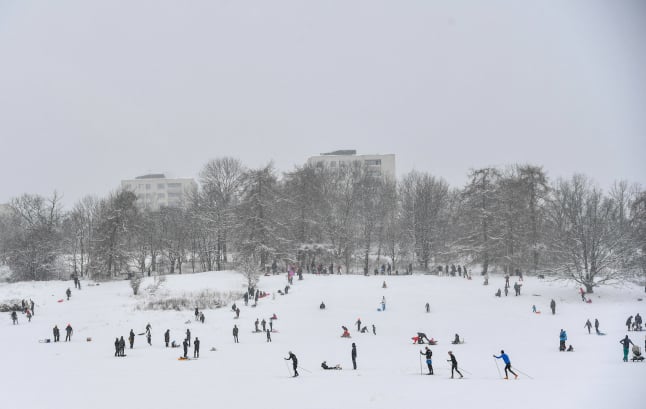 People out and about in the snow in Stockholm on Saturday. Photo: Anders Wiklund/TT

Sweden's flu season is nowhere to be seen

Barely any cases at all of common seasonal illnesses – such as the norovirus (vomiting bug) and the seasonal influenza – have been reported so far this winter, which is believed to be a side effect of the measures that are being taken against coronavirus.

In the first week of the year, Sweden confirmed around 39,500 new cases of coronavirus. But out of 28,000 samples tested by the Public Health Agency for influenza since November, only nine cases were found, and the Dagens Medicin news site also reports that very few cases of the vomiting bug have been reported.

“When it comes to the winter vomiting bug, we have never seen such a delay of the epidemic in the ten years we've been keeping data. Normally it kicks off at the end of November and start of December,” epidemiologist Elsie Ydring told Dagens Medicin.

The graph below shows confirmed cases of the seasonal flu from 2017-2021. 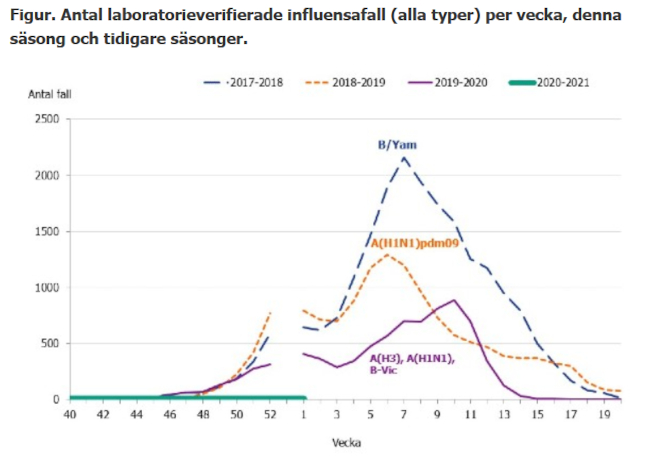 Stay safe on the ice in Sweden

Many lakes and rivers in Sweden have frozen over in the past couple of weeks after temperatures dropped across the country.

But be careful before you head out on the ice, which is particularly treacherous at this time of the year when the weather is changing. In central Sweden right now, there may be a lot of lakes that look as though they are safe, but the ice may still be too weak – especially if there's snow cover, which creates a warm layer of insulation.

Make sure the ice is thick enough before you head out (use an ice pick – it should be at least 10 centimetres) and don't go out alone. Take it easy, because if you move too fast you may not notice weak ice, and if you're going far, bring extra safety equipment such as ice picks, rope and a phone in a waterproof case.

A total of 93.5 percent of all trains arrived on time in 2020 – the best result since 2013, when Sweden's Transport Administration introduced a new way of keeping records.

And although Sweden has been trying to improve its long-term maintenance work of its railroads, fewer passengers as a result of the pandemic was unsurprisingly a key factor.

“Fewer passengers mean more efficient stops at stations. When a train stops it of course means that it is much faster to get on and off,” traffic director Roberto Maiorana told the TT news agency, but added that the number of departures was still high in 2020.

What will happen to Sweden's property market in 2021?

You might think that a crisis that pushed unemployment to a 23-year high, with half a million people out of work, would depress property prices.

But the property market in Sweden boomed in 2020. According to the property industry's own price reporting service, Svensk Mäklarstatistik, the total sale value of all the apartments and houses in Sweden rose 14 percent in 2020 to 510 billion Swedish kronor (approximately $60.8 billion).

The Local spoke to an expert, and compared his thoughts with other experts, to try to get an overview of the predictions for what's in store for the property market in 2021. You can read the full analysis here.

Woman locked up over conspiracy to kill lawyer

Stockholm District Court on Monday sentenced a woman to 14 years in jail after she hired people to kill another Swedish lawyer, Henrik Olsson Lilja, who is internationally most well known for defending US rapper ASAP Rocky in a Swedish court in 2019.

Olsson Lilja was shot outside his apartment in Stockholm in September 2019. He survived. A man in his 50s has already been convicted of the shooting itself, but the woman was also early on in the police investigation suspected of being behind it.